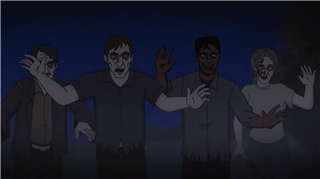 There’s simply no topping Night of the Living Dead, George Romero’s greatest and most influential contribution to the zombie subgenre. But for all its countless imitators and wannabes, we’ve yet to see such a major push for the iconic film to be reanimated as, well, an animated movie. That’s where Night of the Animated Dead comes in and the results are … well, see for yourself. A new red band trailer for the project has been released in all its cartoon goriness, which you can watch below.

Night of the Animated Dead Trailer

Many of us were waiting with bated breath to see what exactly the style of animation would be for this movie and, honestly, it can’t help but come across as a little disappointing. There’s a serious lack of momentum and tension throughout this footage that’s entirely at odds with the overwhelming zombie threat, especially compared to the original. It’s a glaring issue that goes far beyond any trailer editing tricks and certainly appears to be a result of the weirdly static and, frankly, not very pleasant-looking animation.

Compare this to something like, say, Spider-Man: Into the Spider-Verse and the vast difference in kinetic energy and vibrancy becomes even clearer. It might seem unfair to juxtapose this with one of the most instantly beloved animated movies in recent memory, but we are talking about what’s essentially a remake of possibly the greatest zombie movie of all time, after all! It’s definitely possible that this is just a trailer-specific issue and that the pacing and horror of the actual movie itself will be much improved, but there’s no impression quite like a first impression. There’s really no getting around the idea that the animation style seems as lifeless and stale as the zombies themselves.

The reason we can get wacky, experimental movies like this in the first place is because the original Night of the Living Dead has entered the public domain thanks to some copyright shenanigans. This is undeniably a good thing, as anyone can gain easy access to the original movie (particularly for free online) as well as put their own spin on the classic in whatever way that they want. So don’t mistake any of this disappointment as a “How dare anyone put their dirty little fingers on a genre classic” rant, because the ambition to measure up to George Romero himself is certainly not a bad one.

12/08/2021 TV & Movies Comments Off on 'Night of the Animated Dead' Trailer: George A. Romero's Zombie Classic Gets Reanimated
Lifestyle