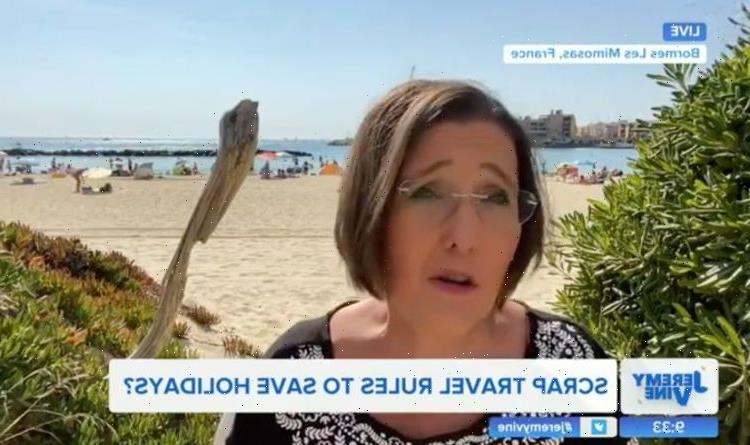 Broadcaster Iain Dale has slammed a traveller for quarantining after returning from France, saying “It’s her choice”. The slamming came after Lisa Minot has expressed frustration over the quarantine rules.

Travel editor of the Sun Lisa Minot is in a “particular situation” after she has travelled to France.

She spoke on the Jeremy Vine show: “The Amber plus category was invented purely for France because of current concerns about the Beta variant.

“The Beta-variant is actually dominant in the French island of La Reunion, which is 6000 miles from mainland France in the Indian Ocean.

“It is utterly ridiculous, and even more insane because the Reunion Island is actually only on the amber list, so I could fly from here to the Reunion Island and spend 10 days there where the cases are much more prevalent, and then I could fly back into the UK without having to quarantine, and that means this just shows this sort of ridiculous this is this whole situation.”

Read more: ‘They’re all about PR!’ BBC slammed for ‘outrageous’ coverage of Olympics

When asked by Jeremy Vine about whether this is fair, the panellist Iain Dale replied: “That’s her choice.

“Maybe she knew that she would have to do that, didn’t she.

“I mean, none of these rules are secret if you want to find out exactly what the rules are, it’s actually quite easy to do so. It’s just a little bit confusing before you do so.”

The government decided earlier this month to keep self-isolation rules for double-jabbed visitors from France, moving it onto “amber plus” amid concerns about the Beta variant of the Coronavirus.

On Friday, Transport secretary Grant Shapps defended the government’s decision. He told Sky News what the variant is an “issue” in northern France.

“It’s not just, as has been reported, on an island thousands of miles away,” he said.

Lisa Minot continued: “There’s no problem in having an amber watch list if that’s the case, and I think what people need to really know is what data that the government is using to assign countries to the various different parts of his traffic light system because at the moment, nobody understands exactly why the government is putting countries on certain parts of the traffic like this.

“And I would also help the travel industry that needs to know desperately about what’s going to be happening, and they can look at the figures in particular countries.

“And if they stopped seeing cases rising to a certain degree, they know the government will then actually say ‘right, it’s going to have to move into a different category on the traffic light system’.”
Source: Read Full Article

03/08/2021 TV & Movies Comments Off on None of these rules are secret! Iain Dale slams holidaymaker for travel fears
Lifestyle