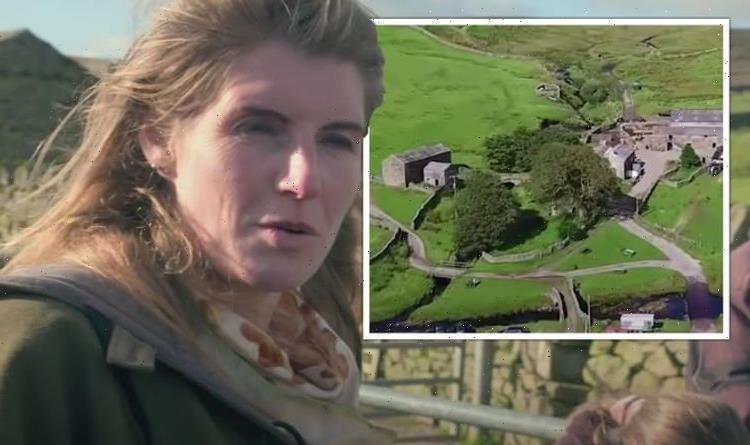 Amanda Owen says she’s ‘half embarrassed’ of her hands

Amanda Owen and her nine children reside at Ravenseat where they work and live on the farm. The Yorkshire Shepherdess first arrived there when she needed to borrow a ram from Clive in the nineties and she has been there ever since. The couple have recently bought a new farmhouse near to Ravenseat, which they hope to renovate and eventually make their family home. They currently rent Ravenseat and while the Our Yorkshire Farm star is very taken with it, she admitted she was horrified by its state when she first set eyes on the farm.

The shepherd described her home to Simon Armitage on The Poet Laureate Has Gone to His Shed: “Ravenseat, we’re in Yorkshire, thank goodness I never left Yorkshire.

“I went straight from Huddersfield to Ravenseat via a few other places. But basically, it’s on the border with County Durham and Cumbria.

“It’s got its own microclimate. Am I selling it to you?”

Speaking on his BBC Radio 4 podcast, Simon replied: “I read somewhere that when you first went there, had you gone to buy a ram or something, and you weren’t that impressed.

“I think I remember reading somewhere that you said it had squelchy carpets and smoke on the wall. I think you might have described it as a s**t hole actually.”

“Yeah I think s**t hole pretty much covers it,” Amanda laughed. “It has improved slightly.

“I guess in a way we’ve put this place on the map, it’s a busy place, it’s always been a busy place.

“If you go back in history, there has been people living and farming at Ravenseat for a thousand years, so imagine that, it’s a place with a lot of history.

“It’s a place that over the years it was farmed during the summer and vacated in the Winter. As time went on it became a little hamlet.

“The wood shed is an old chapel, still got the arched windows. It was a stopping place where the old ponies came through with coal heading into Cumbria. There was even one point an inn there.

“It is a place that has such a history, it’s to do with people. It’s what fired up my enthusiasm for this place.”

Recalling her first moments at Ravenseat, Amanda continued: “ The first time I saw it, it was dark, I was walking across a muddy yard into almost what felt like the set of an episode of All Creatures Great and Small, and met Clive.

“That was the very beginning and that was 1996, so a good while ago. Things have changed but things haven’t changed.

“That’s the beauty of the place, time stands still. That is Ravenseat.”

Our Yorkshire Farm first aired in 2018 and has been a big hit with Channel 5 viewers.

But Amanda admitted she can’t understand why so many people are interested in her life on the farm.

“The what happens bit is a mystery to me because I’ve got to say absolutely nothing happens,” she told Simon.

“I suppose in a way it is a kind and gentle soap opera but with no CGI graphics, no murder, no sex scenes, anything like that, it’s just countryside, it’s the outdoors, it’s a farming family, my farming family just going about our business.

“It’s down to earth, what you see is what you get. I can’t understand really, why it has become the phenomenon it has.”

The Poet Laureate Has Gone to His Shed is available to listen on BBC Sounds now.