“If you’re looking for a place to lean in, though, I think maybe ‘intelligence’ might be a good place to start” 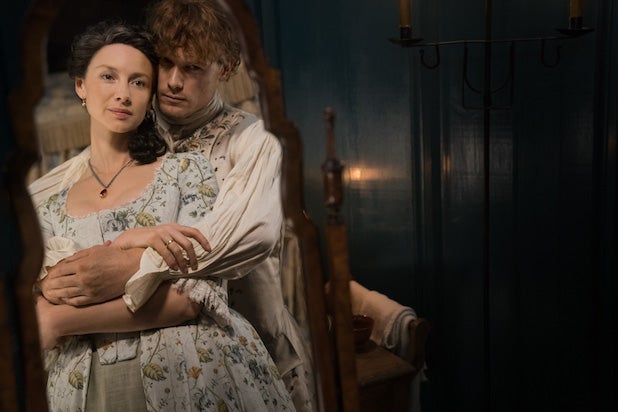 “Outlander” author Diana Gabaldon took to Twitter on Monday to respond to Starz COO Jeffrey Hirsch and his recent comments attempting to locate the show’s appeal to women viewers.

“Well, I dunno, Jeffrey,” Gabaldon wrote. “I get a lot of mail. I can’t say I see a lot of people talking about Jamie with his shirt off, unless it’s mentioning the shock and poignancy of his scars.”

The author was referring to Hirsch’s comments in The Hollywood Reporter last week, when he held up “Outlander’s” women viewers as the kind of audience the premium cabler aims to court with its upcoming programming.

“You can say that it’s great because women like it because she’s a surgeon who goes back in time, but there’s also another side of that, which is there’s some eye candy for that audience and people like when he [Sam Heughan] has his shirt off,” he said.

Gabaldon noted that most of the feedback she gets from fans of the show is in response to “the intelligence of the story and the complexity and strength of the relationship between Jamie and Claire” and how closely the show hews to its source material. “They also love the visual beauty of the show and the emotional depth of the acting,” she wrote.

In the interview Hirsch identified the group as “premium women,” which he described as “a little older — probably 24-54 and a little more economically viable than other segments, in terms of broadcast. They really like high scripted drama, great women in history and a lot of IP.”

The exec pointed to the success of “Outlander” and “White Queen,” saying they showed that those types of historical dramas perform well with that audience. According to Hirsch, the critically acclaimed sci-fi drama “Counterpart” was canceled because it “wasn’t accessible” enough, while the one-and-done “Now Apocalypse” similarly skewed too male.

“If you’re looking for a place to lean in,” Gabaldon offered in her tweet, “I think maybe ‘intelligence’ might be a good place to start.”