Patrick Dempsey surprised fans when his character Derek Shepherd (a.k.a. McDreamy) appeared at the end of Grey's Anatomy's season 17 premiere. Look back at more of the show's shocking moments. 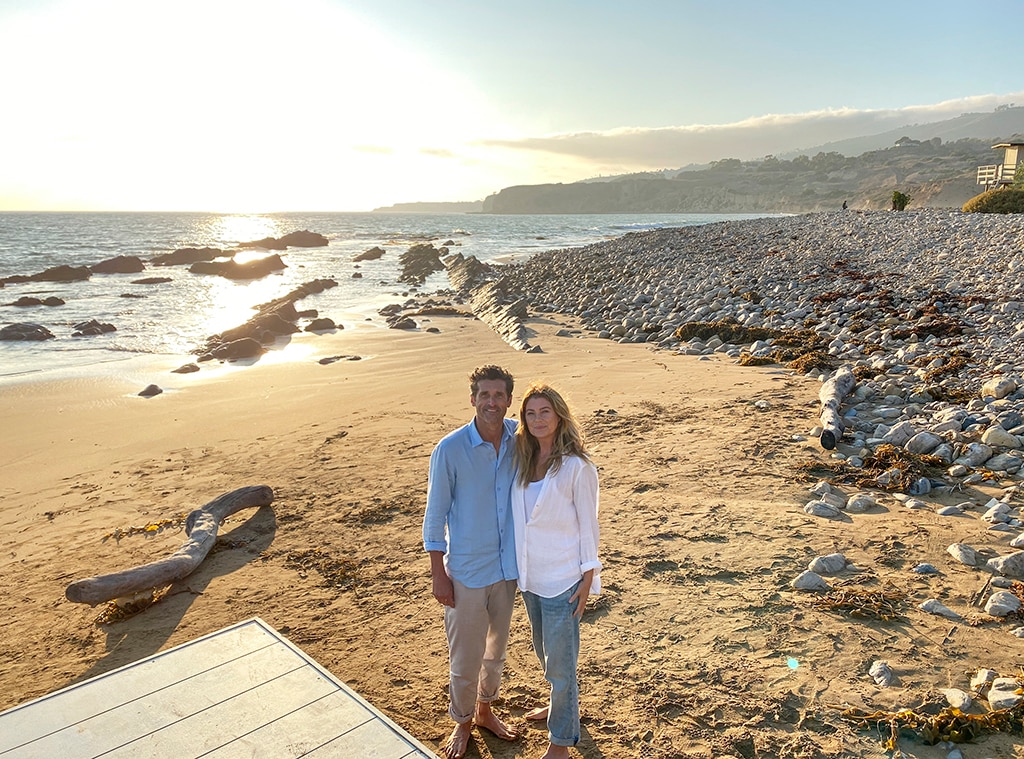 Talk about a (Mc)dreamy surprise!

Grey's Anatomy fans were shocked after Patrick Dempsey reprised his role as Derek Shepherd at the end of the season 17 premiere on Nov. 12. In the last 30 seconds of the episode, Dr. McDreamy reunited with Ellen Pompeo's Meredith Grey on a beach as part of a dream-like sequence—making it the first time Dempsey has returned to the show since his character's death in 2015.

The sequence took place after Dr. Grey was found collapsed in the parking lot at Grey Sloan Memorial. Earlier in the episode, viewers watched the hospital's doctors and nurses deal with several challenges amid the global coronavirus pandemic, including coping with the number of COVID-19 deaths and not having enough PPE.

During an interview with Deadline, showrunner Krista Vernoff talked about the pandemic and how the idea to bring back Dempsey came about.

"From a writer's perspective, it happened because it was my job to find a way—once we determined that we were doing the pandemic—to also bring joy, and escape, and fan candy, and all the things that at Grey's Anatomy we give people," she said about his appearance. "We give them romance, and we give them humor, and we give them joy, and a lot of that is lacking for the medical community in this pandemic. And so, I was walking on the beach one day, and I was like, what if there's a Meredith dream motif?"

Vernoff said she then called Pompeo and asked for her thoughts on bringing a late character back on the show. In fact, she credited the 51-year-old actress with suggesting Dempsey.

This won't be the last time fans see Dempsey, either. The 54-year-old actor is scheduled to appear on next week's episode, as well.

Can't wait until then? Take a trip down memory lane and look back at more of Grey's Anatomy's most shocking moments of all time.

Carrie Underwood's CMA Awards Wink Sparks Debate: Who Was It For?

Incoming surgical intern Meredith Grey (Ellen Pompeo) was thrown for quite a loop in Grey's Anatomy's series premiere when she learned that the hunky one-night-stand she picked up at the bar played by Patrick Dempsey was actually her new boss, renowned surgeon Dr. Derek Shepherd. Oops.

Fans were just as stunned as poor Meredith in the season one finale when Addison Montgomery (Kate Walsh) waltzed into Seattle Grace and right up to Mer and Derek, introducing herself with the now iconic "You must be the woman who's been screwing my husband."

When Grey's Anatomy was given the plum post-Super Bowl slot in its second season, fans watched tensely as Meredith decided to shove her hand into a body cavity containing a live explosive to keep it from detonating. And just as we began to breathe a sigh of relief when bomb squad chief Dylan (guest star Kyle Chandler) began to walk away with the removed explosive, it blew, taking the poor guy out in the process.

Fans watched as Izzie (Katherine Heigl) fell in love with the effortlessly charming Denny Duquette (Jeffrey Dean Morgan) as he awaited a much-needed heart transplant throughout the second half of season two, falling for him right along with her. And when her wild plan to cut his LVAD wire to move him up the transplant list failed spectacularly, resulting in his death in the season finale, it was confirmed that Grey's Anatomy was not here to give us the happy endings we wanted.

What was more surprising during season three's big ferry accident: Meredith nearly drowning after being knocked into freezing cold waters at the accident site or her later admission that she'd given up trying to survive?

At the end of season three, a surgical intern named Lexie (Chyler Leigh) arrived at Seattle Grace, first meeting Derek the night prior to starting at the hospital in a moment that mirrored his first interaction with Mer two seasons prior (but, thankfully, did not end with them sleeping together) and then introducing herself to George O'Malley (T.R. Knight) in the intern locker room. Oh, and her last name? Why, Grey, of course. And just like that, Meredith's younger half-sister, one of two daughters raised by her father Thatcher and his second wife Susan, was added to the mix.

Two and a half seasons after he'd perished, Denny was back and his ghost was…having sex with Izzie. In one of the most ludicrous moments in the show's history, Ghost Denny was used to signal to viewers and to Izzie herself that something was wrong. That something was ultimately proven to be stage IV metastatic melanoma, which had spread to, among other places, her brain.

While fans were expecting Izzie to bite the bullet in the season five finale, the fact that no one could find George should've clued us into the fact that something was up with poor O'Malley. When Meredith finally realized what the John Doe who'd been hit by a bus while trying to save a woman on the street was writing in her hand–007, his cruel nickname in earlier seasons–she tried to alert the surgeons working on him, but it was too late. He flatlined and died.

File this one under: The mist disturbing episode in Grey's history. In the season six finale, the grieving husband of a deceased patient arrived at the hospital, fresh off its merger with neighboring Mercy West, with a loaded gun and nothing left to live for. A few doctors were murdered, several more injured, and the image of Bailey (Chandra Wilson) being dragged by her feet out from under a patient's bed will forever haunt us. Thankfully, she survived. Mer and Derek's baby wasn't so lucky. After he was shot, she believed he'd died and had a traumatic miscarriage.

Two seasons after the horrific hospital shooting, Shonda Rhimes decided it was time to torture a handful of docs yet again. In the eighth season finale, a plane carrying Meredith, Derek, Cristina Yang (Sandra Oh), Lexie, Mark Sloan (Eric Dane) and Arizona Robbins (Jessica Capshaw), traveling to Boise, Idaho to perform surgery on conjoined twins, crashed in the wilderness, leaving them stranded and wounded, with no one at home even knowing they'd gone down. The accident claimed Mark and Lexie's lives and Arizona's leg, while nearly leaving Derek's hand permanently injured.

How would Grey's send off Mer's person Cristina at the end of season 10 after Sandra Oh decided to move on? Why, by having ex Preston Burke (Isaiah Washington) pop back up after leaving her at the altar in season three to offer her his hospital in Switzerland. That the show brought Washington back after his highly contentious exit, which involved him referring to co-star T.R. Knight by a heinous gay slur, was truly surprising.

As the show said goodbye to Cristina in the season 10 finale, it welcomed her replacement as the head of cardio-thoracic surgery, Dr. Maggie Pierce. And when the character, played by Kelly McCreary, revealed to Richard (James Pickens Jr.) in the episode's final moments that she was Dr. Ellis Grey's daughter, asking if he knew the legendary doctor, he wasn't the only one stunned to learn that he had a daughter and that Mer had another sister.

Literally no one saw it coming when, with a handful of episodes left to air in season 11, Derek was killed off, the victim of a head-on collision just after rescuing a family on the side of the road involved in a car crash of their own. Patrick Dempsey had just recently extended his contract on the show, making his departure truly unexpected. Killing off Mer's husband may have been Shonda Rhimes' only feasible option to get rid of the character in a way that didn't render an 11-year love story completely worthless, but that didn't mean it hurt any less.

As if Mer hadn't been through enough up to this point, in the ninth episode of season 12, she was violently attacked by a patient in a brutal episode that saw her jaw broken and then wired shut in order to restore her hearing. Her panic attack when her kids won't see her during her recovery was a stunning moment of acting from Ellen Pompeo.

How would the show explain Alex Karev's sudden absence after original star Justin Chambers walked away from his role midway through season 16? By having him write letters to wife Jo (Camilla Luddington), Mer and Bailey explaining that he'd gotten in contact with Izzie years after she ghosted and sent him divorce papers, only to learn that she'd been raising their twins all these years on a farm somewhere and he'd chosen his newfound family over his life in Seattle. If anyone tells you they saw that coming, we'll show you a liar.