Alright, so we already know that Bachelor behind-the-scenes secrets are cray, but we didn’t know that producers actually decide when the contestants will kiss the lead! Former Bachelor Peter Weber is spilling all the dirty deets. Apparently, all those “romantic” moments weren’t actually spontaneous. Nah, they were manipulated by the people behind the camera.

“I don’t know if I actually am the Bachelor that did that!” Peter told Us Weekly in response to a question if he was the Bachelor to kiss the most women. He explained that production showed all of his night one makeout sessions. “Everyone kisses a lot of people, but I probably just played ball a little bit too much with the producers. You don’t see this on camera, like, so many times, I was being given this [signal] the entire time, like, they wanted that and hey, if I was feeling it with the girl, I was gonna go in for it.” 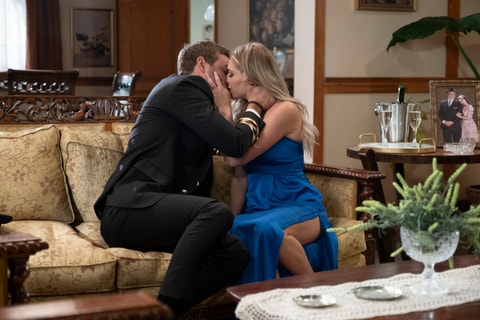 He added with a laugh, “Producers, if they think it’s a good time to kiss, they’ll, like, tap their fingers or they have their phone that says, ‘Kiss.’”

That’s not the only BTS secret he revealed. You know how the lead meets at least 25 people in one night? Well, they actually aren’t expected to remember all of their names. He continued, “The first night, though, it’s usually [the girls’] names behind their head, just to kind of remind me, and then it’ll segue from that to, ‘All right, you should do this, we think it’s a good time.’ … And then I got labeled, I guess, the most-kissed Bachelor.”

My mind is lowkey blown, tbh.

You love all the deets on Bachelor Nation. So do we! Let’s overanalyze them together.