The heated debate began when Piers Morgan asked the Scottish National Party (SNP) leader about her ambitions to rejoin the EU if Scotland voted for independence. The ITV Good Morning Britain host said: “Hypothetically if you won a referendum and Scotland votes outright and becomes its own entity, I think it is going to be a lot more complicated for you to get into the EU than you think.

“You would have to join the queue that has a number of other countries that are already going through the process.”

But Ms Sturgeon blasted: “There is no queue.”

A laughing Scottish First Minister hit back continued to insisted there is no queue to become a member of the EU. 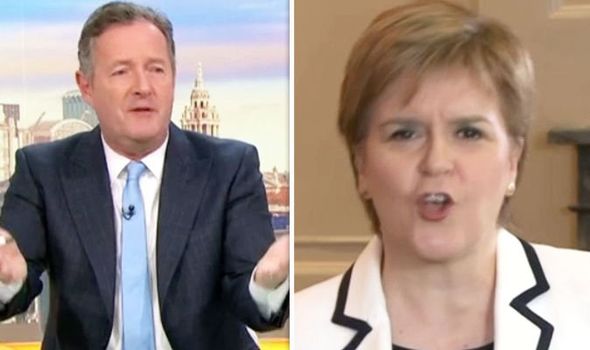 So just to clarify, you think that if you are independent you would literally just ring up your mate, Jean-Claude, and literally just join the EU as if it’s as simple as that.”

Ms Sturgeon replied: “I don’t think there would be any fundamental barriers stopping Scotland being in the European Union as an independent country.

“Why would there be?

“The European Union almost is the moment it was established has been in the business of trying to enlarge its territory and not shut out countries that want to be members and have been members for the last four decades.”

The SNP leader then claimed an independent Scotland would not be made to join the euro, adding: “No country will be forced into the euro.”

The comments come after the First Minister claimed there was a “real chance” for Scotland to stay part of the EU, and said Westminster had “ignored the overwhelming vote in Scotland” to Remain.

She put a “stop Brexit” message at the heart of her manifesto, repeated her call for a second Brexit referendum, and called for the revocation of the Article 50 divorce mechanism if a no-deal exit was “the only alternative”.

The First Minister also claimed that if Boris Johnson replaced Theresa May as Prime Minister, he could do a deal with Nigel Farage’s Brexit Party in a “nightmare” scenario for Scotland.

But in March 2017, the EU said Scotland would not have an automatic right to become a new member if they vote for independence.

He added: “The Commission does not comment on issues that pertain to the internal legal and constitutional order of our member states.”