GMB host Piers Morgan explained that the Brexit Party leader Nigel Farage has begun “attacking the media” in the way Donald Trump does to better help his image. Mr Morgan reflected on the spat between the party leader and BBC’s Andrew Marr as he explained that Mr Farage would be the real “winner” in the end. During intense questioning from the BBC host during a Sunday interview, Mr Farage began a rant criticising the BBC and their coverage of Brexit and Leave supporters.

“Any sign of the media coming for him, he is now coming back with bells on.

“He is playing the candidate of an outsider with the world, the media and the establishment against him.”

GMB host Susanna Reid added: “It is quite an effective way to not to answer a question. 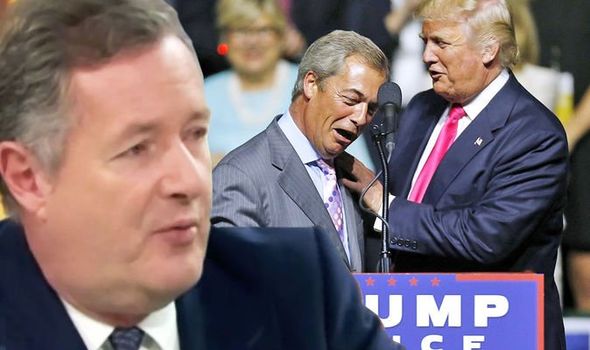 “You are not held accountable for the things that you have said but you spin this narrative that you are sort of fighting the good fight and everyone else is involved with a betrayal.”

Mr Morgan chimed in: “The point I’m making having watch it is, in a way both sides win.

“But the ultimate winner is probably Farage and I’ll explain why.

“Andrew Marr goes hard on him and asked all the right questions and the liberals and the media watching say go on and get him.

“Rather like Donald Trump in America if you over-egg the soufflé when you do that actually you empower Farage in the way that Trump gets empowered by media constantly attacking him.”

The Brexit Party is expected to do well in the upcoming European elections on May 23 as early polls have predicted that the new party will receive more votes than both the Tory and Labour party.