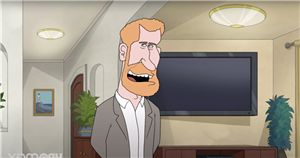 Prince Harry is mocked in new US cartoon, The Prince, where his neighbour Orlando Bloom plays him in the series created by Family Guy star Gary Janetti.

The Prince follows a fictional version of Prince George and the Royal family with the first entire season of the HBO Max show available to stream on Thursday in the US.

While it will also feature guest debuts from Andy Cohen and Real Housewives stars Erika Jayne, Kyle Richards and Lisa Rinna – to name a few.

In the trailer, it sees the fictional version of Prince Harry in an apartment in Los Angeles, California. Orlando's character comments: "This might be the smallest palace I've ever been in."

To which a fictional version of Meghan Markle replies: "Well, it's an apartment," to which "Prince Harry" adds: "Yes, an apartment palace, I know that. Lots of tiny palaces inside one big palace."

Orlando previously spoke of his decision to voice the fictional version of Prince Harry in the US cartoon, revealing that it was fiancée Katy Perry who encouraged him to take part.

Speaking to The Hollywood Reporter in 2020, the actor said: "Initially, I was like, 'Hmm, how do I feel about this,' because I'm a British boy who's very proud of my roots.

"I understand how the royal family is loved by some and loathed by others, and I've always understood it as part of my heritage and background. I’m not someone who wants to poke fun at anyone normally, but this was so clever, witty and affectionately done. Actually, Katy saw one bit of it and was like, 'You've got to do this. This is genius.'"

Orlando said that he didn't know Prince Harry before taking on the role but since becoming neighbours in California he has met him.

He continued: "This guy is so nice, and I think he's got a great sense of humour. I hope he maintains that through this because they're sort of on a pedestal. We're showing real adoration to them in one form or another.

"I try to justify it, because quite frankly, if I'm honest, it's not like me to poke fun at anyone but it is done with affection."