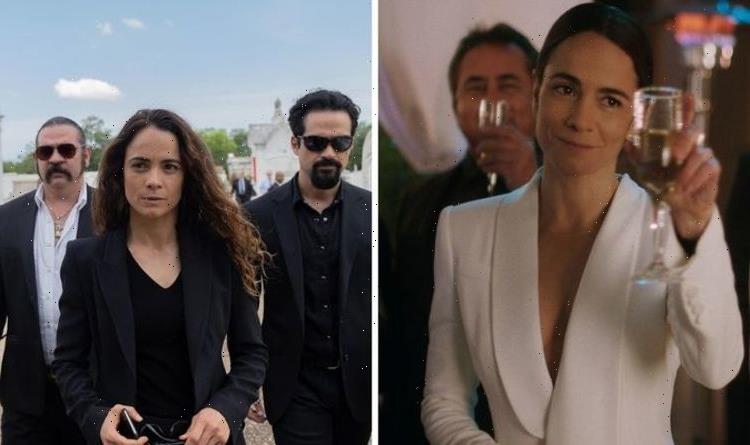 USA Network’s hit crime drama followed the life of queen pin Teresa Mendoza (played by Alice Braga) on her mission to avenge her lover’s death. Towards the end of Queen of the South, Teresa was in a relationship with James Valdez (Peter Gadiot), however, the show’s writer revealed the real and unexpected reason Teresa and James got together.

In season one Teresa was forced to go on the run to America after her cartel boyfriend Guero Davilas (Jon-Michael Ecker) was murdered.

She was raised poor in Mexico, so her relationship with Guero introduced her to the lavish, dangerous and fast life of being involved with the drug cartel.

The two first met when she worked as a money changer, he later asked her to be his girlfriend after beating up her boss who groped her while she was working.

The couple were head over heels in love for a year when she was told Guero had passed away.

Teresa moved to Dallas where she set out to avenge Guero’s death and become the biggest drug distributor in the United States.

By episode two of the first season, Teresa met James who was working for Camila Vargas (Verónica Falcón) and although he was tasked with getting her to trust him, they hit it off.

The two began getting close as they were often paired for risky missions, with their new partnership James began looking out for Teresa and even lied to his boss to protect her.

Their life-threatening mission often saw them evading death and as they would always look out for each other, it became clear to viewers James would be her potential love interest.

At the end of season one, Teresa made the shocking discovery Guero had survived the plane explosion, left her behind and was working for the DEA.

During a Q&A with fans on Instagram, writer Ryan O’Nan was asked if James was always planned to be a love interest for the queen pin.

After confessing he didn’t write on the first season, he reflected and stated: ”I would guess, she thinks Guero dies in the beginning and then he’s going to come back in the very end as the big reveal at the end of season one that he’s alive.”

Ryan explained: “The best way to get the most emotional impact of that moment is to have her start to have a connection with somebody else in this new world that she’s been brought into.

“My guess is that that would be James and they have a very different kind of relationship, they come from very different places and you just know going into season two she’s going to have to navigate this in some way,” he added.

The writer concluded: “It’s fun storytelling how you make Guero return be the biggest deal and the most complicated thing as possible is by having this other character in there.”

This was indeed a tough moment for Teresa as she was hurt and although she was slowly falling for James, she had trust issues because of Guero.

However, by season three, the pair confesses their feelings for each other in a heart to heart and have sex.

By the season finale, James and Teresa had rounded up their group and left the cartel lifestyle behind them.

Season five was the final instalment of the Queen of the South and although fans have requested a spin-off, network bosses are yet to confirm if this would work.

However, fans may have a while to wait as actress Alice Braga has signed up for a new Netflix role.

She will be starring in Netflix thrilling series Ivy, as a mother recovering from a brutal accident.