SPOILER ALERT: This interview contains details about HBO Max’s season one finale of Raised by Wolves

HBO Max dropped the season one finale to their Ridley Scott executive produced series Raised by Wolves in the middle of last night. It’s another sci-fi series up there with HBO’s Westworld, Amazon’s Tales From the Loop, and CBS All Access’ Picard that not only echoes loudly during the pandemic when it comes to human frailty, survival and interaction, but is just as bedazzling to watch in its tech savvy as we wait for Dune to hit the big screen.

HBO Max renewed Raised by Wolves for a second season weeks after dropping its first three episodes, noting it as their top-performing original with an audience jump in week 2 of nearly 50%.  The series centers on two androids (aka necromancers), Mother (Amanda Collin) and Father (Abubakar Salim), who are tasked with raising human children on the barren planet Kepler-22B. The necromancers raise crops and fend themselves from flying creatures of the night (akin to distant skinny relatives of Scott’s Aliens). They live in a world in which humans have fled Earth for their own survival, the race divided between atheists and religious followers, the Mithraic, who believe in the supreme being Sol. Two atheists, Marcus (Travis Fimmel) and Sue (Niamh Algar) have taken over the faces (yes, faces) of two Mithraic followers, and are among their survivors. Marcus is losing it, and believes he’s the Mithraic’s ultimate leader and can hear the voices of Sol. Sue, who tries to assist Mother in giving birth tonight, gets shot. And then Mother doesn’t give birth to a child, rather to a snake who’ll have a big footprint in season 2.

We chatted with series creator Aaron Guzikowski about what’s to come.

The series is so reminiscent and offers several touchstones to Ridley Scott’s Alien franchise especially the recent Prometheus prequels. Mother feels like she’s the bad-ass sister to Michael Fassbender’s android David. This isn’t often discussed, but buried on the Prometheus Blu-ray is an Easter egg connecting the Alien franchise to Scott’s Blade Runner. What were some of the conversations you had with Ridley when you first pitched the series? It stands on its own, but it feels like a wonderful cousin to Alien. Will you ultimately connect Raised by Wolves to Aliens? 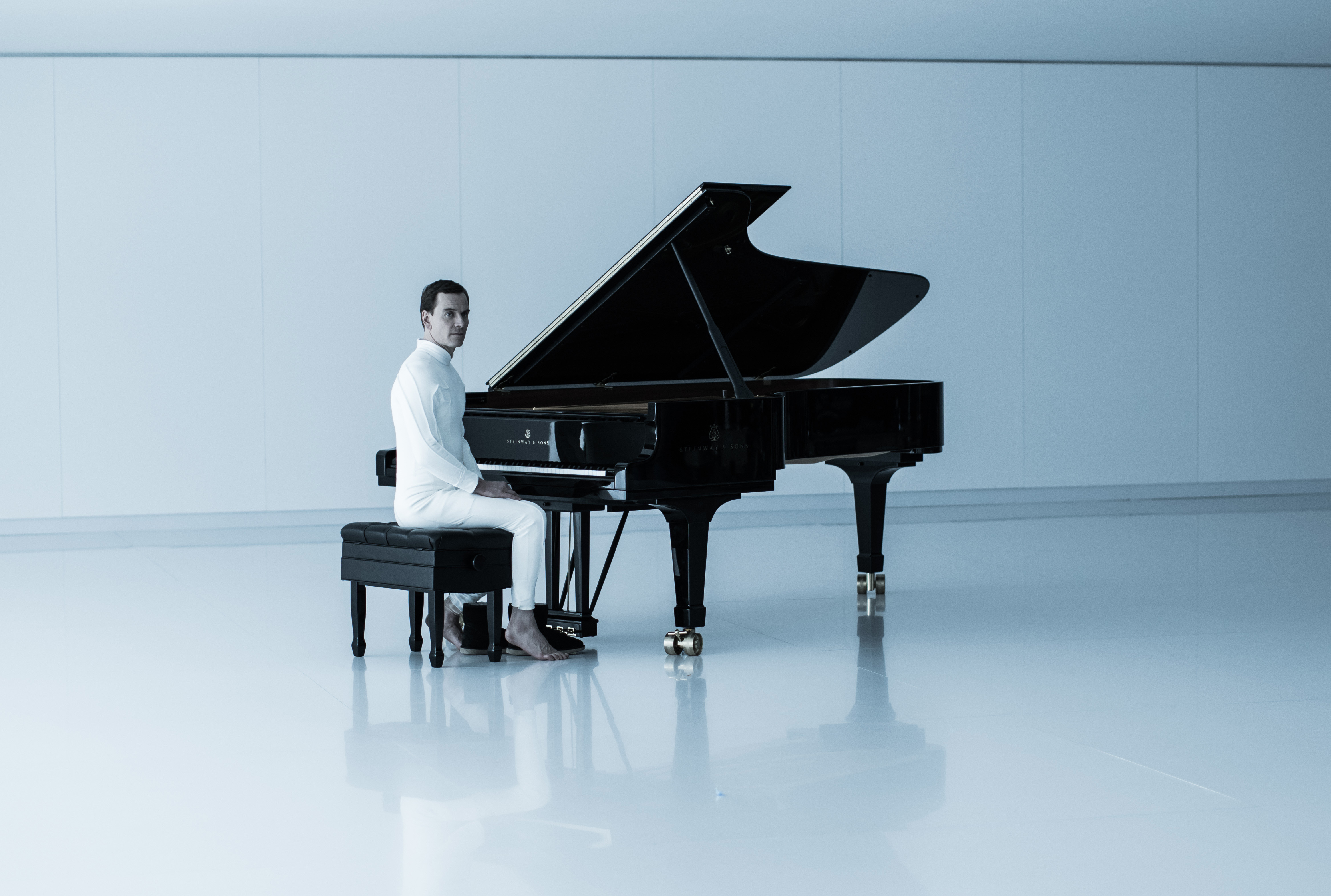 Aaron Guzikowski: Obviously, I was hugely influenced by all of his work, Prometheus included, for sure, and when I first met with him, we talked all about it. But there was never any concern with him in terms of how it was going to connect to his other stuff. He more wanted to just kind of take it for what it was. And obviously, there’s a lot of homages to the other stuff he’s worked on, I mean, because he’s built this whole visual vocabulary in terms of modern science fiction. That’s part of the vocabulary of the show. I think he was also interested in evolving beyond that and seeing what new aspects we could discover in terms of the aesthetic of all of this and how these things, the themes, connect.

There are a lot of the same sort of questions about what is it to be human. Where do we really come from? All these grand mysteries that we’re trying to interpret on some level. Starting from childhood, I’ve always been interested in religion and trying to find ways to explore those themes. So, it was interesting, but we never talked about how specifically the series would fit into that mythology, nor was that really ever the goal. As you said, it’s a close cousin, and it can kind of sit alongside it, but technically speaking, the mythologies don’t link up, necessarily.

The terrain where you shoot is gorgeous. Where do you shoot the show? It looks like a real, natural landscape, not studio. 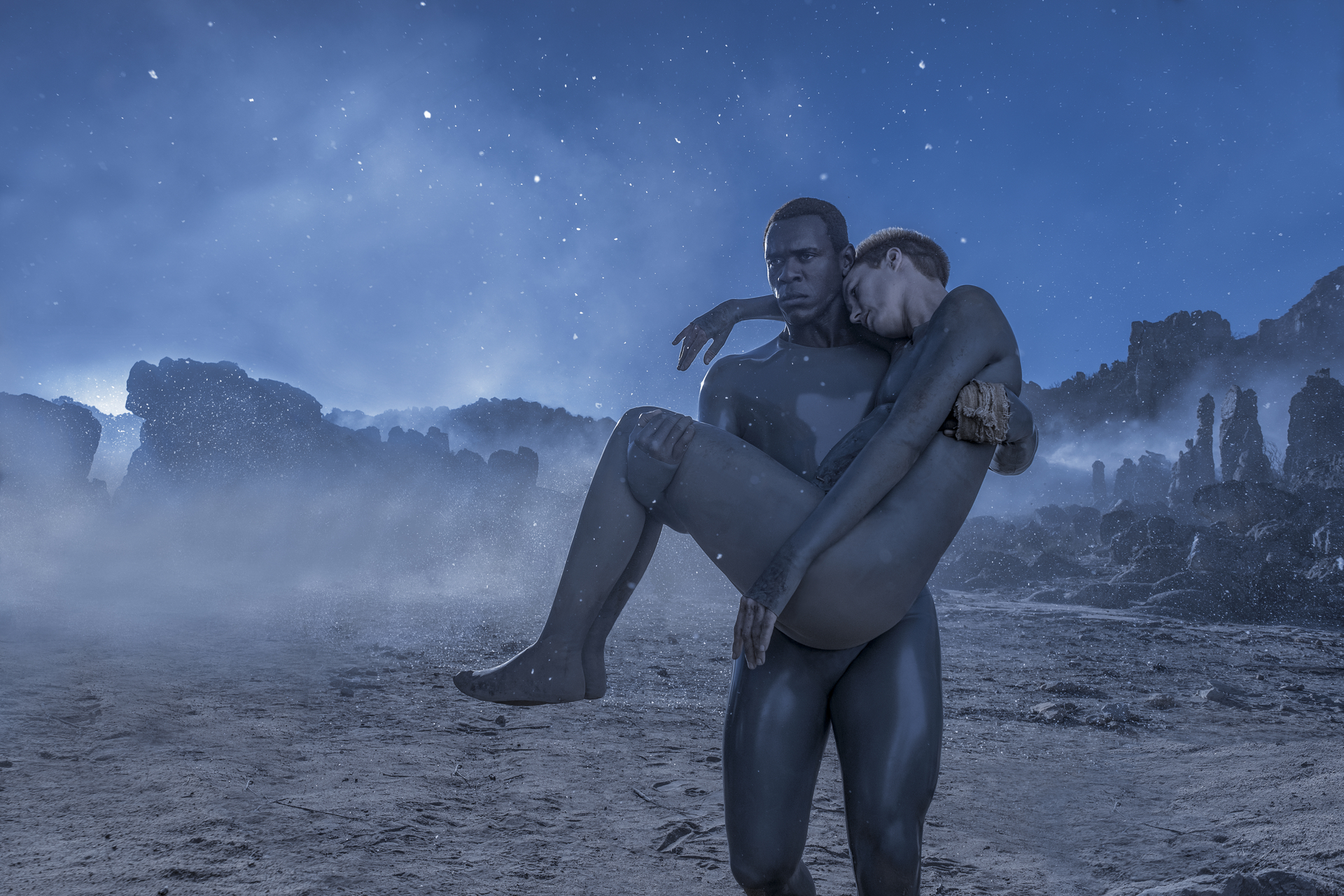 Guzikowski: Cape Town, South Africa. What’s so great is that Ridley likes to do a lot of stuff practically, and so we had a lot of real locations, and where we shot in and around Cape Town, so much of those environments are real: the mountains, the weird clouds that kind of fall down over the mountains and cascade down. That happened every morning just naturally, and just something about the topography there, it feels kind of ancient and kind of weird, and you know, obviously, from the states, it’s even more so. I mean, people who live around there, it’s not so much, but it’s just beautiful in every which way; the lighting, and it just transports you in this great way.

When do you anticipate shooting season two? It looks like a feasible show to shoot during COVID in that there aren’t a lot of crowd scenes.

Diving into the final episode: that tunnel that Mother and Father flew into has another side to it. There’s a whole other side to Kepler 22B, isn’t there, that’s vegetative?

Guzikowski: Exactly. Mother and Father think they’re on a suicide mission to destroy this child that Mother’s given birth to that will eventually endanger the plan and all her other children, but what happens is, they end up going all the way through the planet as opposed to burning up in the middle of the core, as you would in a normal planet. Obviously, there’s something about this planet that’s unique. They just keep going, and they actually shoot out on the other side of the planet in the tropical zone where they’ve always wanted to get to, but ironically, they don’t have their children with them, so it’s a bit of a problem.

So, the serpent Mother gives birth to, if you can expound on that. We were thinking she was impregnated by her human creator virtually, and obviously that’s not the case.

Guzikowski: In the final episode, Mother even says, it wasn’t our creator; something else put this inside of me. We don’t know what that is, but what we do know is when they first arrived on this planet, they had found all these giant serpent skeletons. So, at one point, this thing that she’s given birth to did exist on this planet. They were like the dinosaurs of this planet, and somewhere, what it was, it seems that it has somehow manipulated her into bringing these things back. So, in season two, there’s a big new piece on the board that’s Mother’s seventh child, which she’s going to have to deal with.

And we also learned in the last episode that there are other humans on the planet. Tell us about them.

Guzikowski: They’re refugees from Earth just like the Mithraic, though the Mithraic had believed that their enemies wouldn’t have the ability or the technology to ever reach this planet. So we’ll find out in season two how that was made possible. There’s a very different power dynamic, as you have this new group arriving from Earth, and they’re able to keep a lot of their tech when they get here, as opposed to Mithraic whose shipped crashed and are pretty vulnerable. 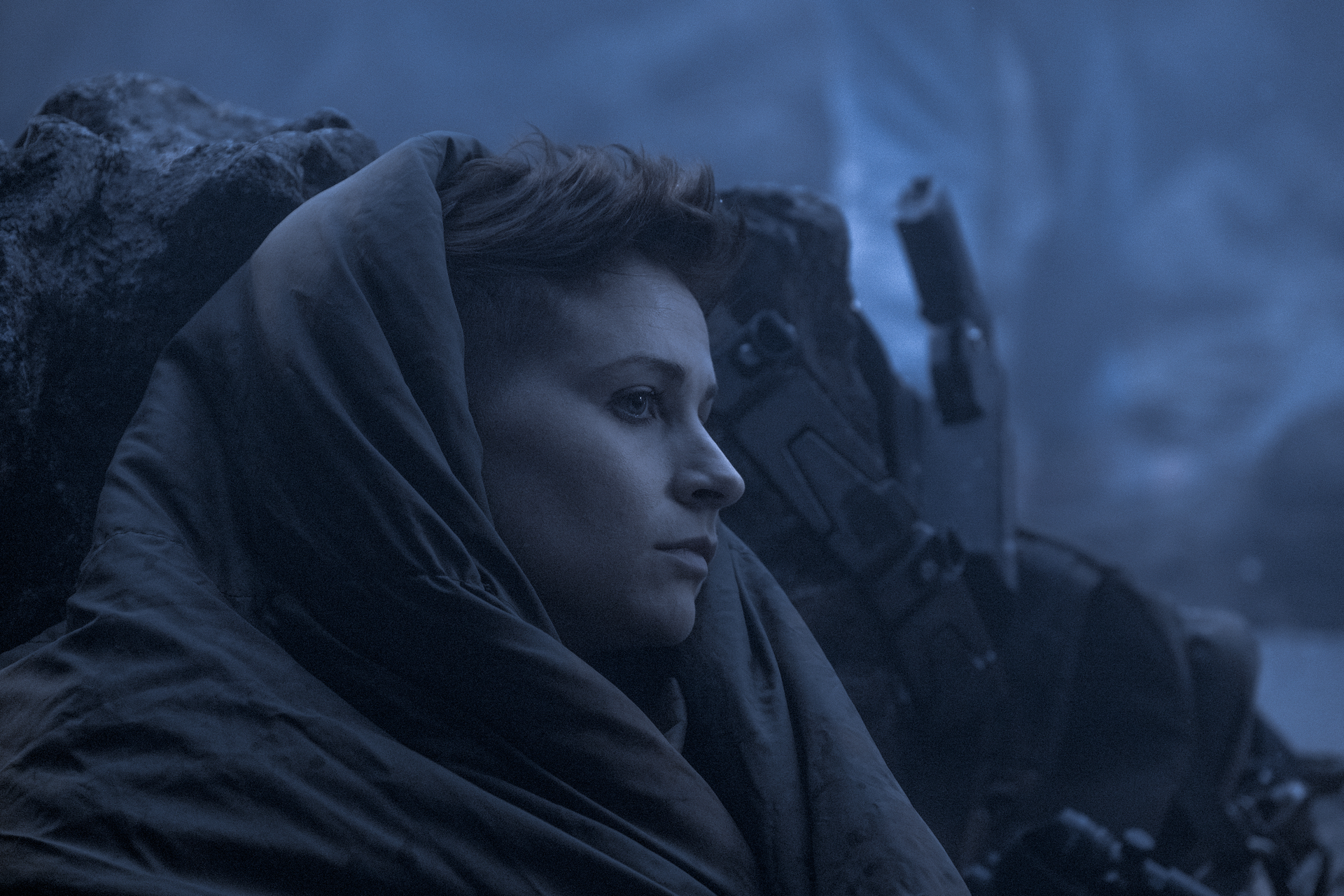 Now, can we say that Sue is dead?

Guzikowski: No, actually, I can breathe some hope there. I would say that Sue has a very good chance of surviving into season two.

Guzikowski: He’s obviously in touch with something. Whatever spoke to him had the omniscience to know what it knew about the lies that Sue was telling to him. So he is in touch with, it seems, whatever Marcus has been in touch with, earlier in the season before he stopped hearing it. It probably connects in some way, shape, or form to whatever impregnated Mother, which we’ll get into in season two, trying to figure out who’s behind all that.

And the hieroglyphics that Paul finds in the cave?

Guzikowski: The hieroglyphics are strange. Obviously, we see them, and they do appear to be Mother and Father in a spacecraft, and there appears to be, a store of embryos there, and so we have to wonder. I mean, these are cave drawings. They look to have been there for a long, long time, thousands of years. Mother and Father arrived here 13 years ago. So the question becomes, how can this be? What does this mean? Is there some sort of schism in terms of time and space? 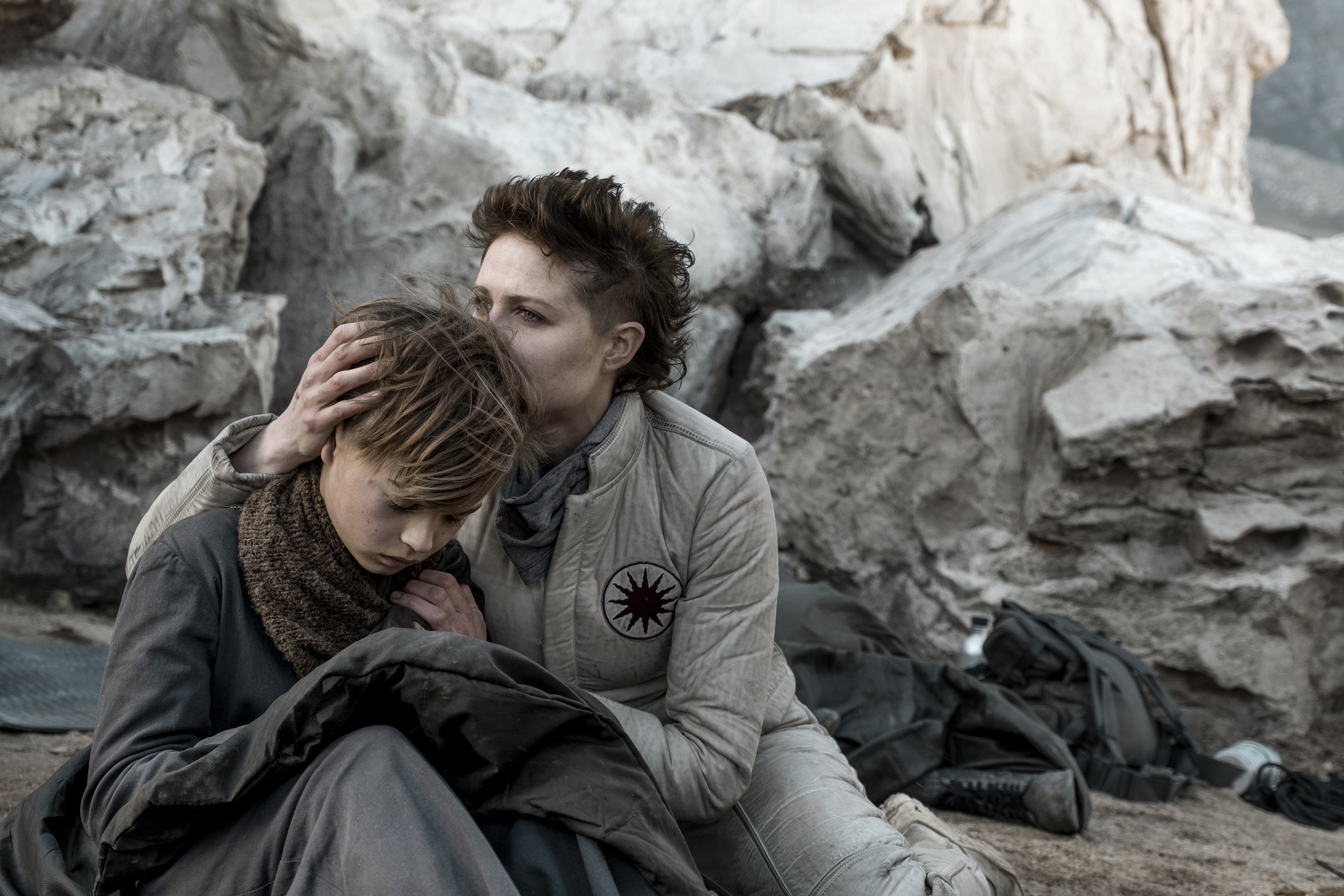 Do you think Sue and Marcus will become more aligned with the necromancers in season 2 or the new humans on the planet?

Guzikowski: It does remain to be seen. Though I can say the new humans on this planet, or some of them anyway, would be from…there’s a little bit of a power shift in terms of the Atheists and the Mithraic. A lot of these humans would be from the Atheist side, and that’s the side that Marcus and Sue basically betrayed, in a sense, when they pretended to be Mithraic in order to save themselves. So they’re going to kind of be faced with some of their old friends in season two.

Have you already started breaking story on season two?

Yes, I have. I just kind of kept going after season one, even though I didn’t know if we were going to be renewed or not. I knew that if I didn’t keep going and I wouldn’t have that lead time to keep going. So I took a little gamble on that one. The series is filling up all the parking spaces in my brain right now. So, as long as it goes, I’m just going to kind of just live on Kepler-22b.

01/10/2020 TV & Movies Comments Off on ‘Raised By Wolves’ Creator On Season One Finale & Season 2: Sometimes The Scariest Thing Comes From Within
Lifestyle