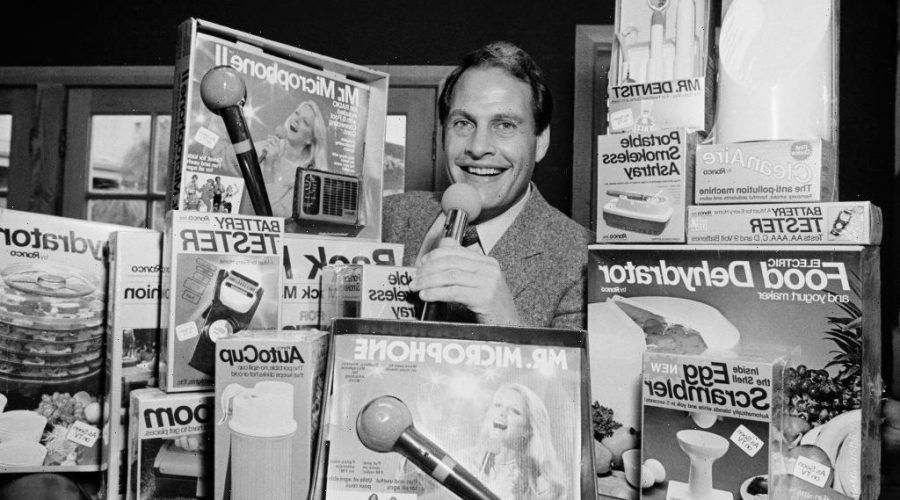 Ron Popeil, the Ronco founder who all but created the late-night infomercial and pitched such durable — in memory if not quality — items as the Pocket Fisherman, the Veg-O-Matic, the Bedazzler and Mr. Microphone, died today at Cedars-Sinai Medical Center in Los Angeles following a medical emergency. He was 86.

Beginning in the 1950s with a low-budget, minute-long black-and-white commercial for the Ronco Chop-o-Matic, Popeil (with then-partner Mel Korey) devised the rapid-fire pitches — consisting of a string of amazing! unbelievable! claims — that would make household names (literally) of items such as Hair in a Can Spray, the Popeil Pocket Fisherman, the Kitchen Magician, Mr. Dentist, the Smokeless Ashtray, the Inside-the-Egg Scrambler, a rhinestone stud setter popularized as a Bedazzler, the Cap Snaffler and the Buttoneer.

Remembered as much for their oddly charming unabashed hucksterism as for any actual product utility, the commercials often went viral before viral was a thing, turning advertising boasts into kitschy catchphrases. “Hey good lookin’, we’ll be back to pick you up later!” said a curly-haired teen cruising in the back of a convertible to promote the pre-karaoke machine known as Mr. Microphone.

“But wait, there’s more!” and “As seen on TV” became Popeil mainstays, and “Set it, and forget it!” was remembered by viewers long after their Showtime Rotisserie & Barbeque ended up in the trash.

Though Popeil sometimes suggested his early commercial for the Chop-o-Matic (later renamed the Veg-o-Matic) was parodied on I Love Lucy  – a claim that rivals any fish story in the Pocket Fisherman commercial, given that the Vitameatavegamin episode aired in 1952), he was on sturdier ground in claiming direct inspiration for Dan Aykroyd’s classic “Bass-o-Matic” sketch on Saturday Night Live in 1976.

According to a biography on his website, Ronald Martin Popeil was born on May 3, 1935, in New York City to a kitchen-gadget inventor and his soon-divorced wife. At 13, Popeil moved to Chicago to work in his dad’s factory and three years later began selling products at flea markets. At 17, Popeil set up a stand in a Chicago Woolworth store, where he “hawked his gadgets six days a week, 12 hours each day.”

Over the years, Popeil’s pitches were parodied on everything from King of the Hill and The Simpsons to Old School and The X-Files. He was a frequent guest of late-night talk shows including The Tonight Show and Late Show with David Letterman. His life was chronicled on A&E’s Biography, History Channel, Lifestyles of the Rich and Famous and many other TV channels and shows.

Popeil’s products also included the popular, if often scorned and widely satirized, Ronco Records compilation albums sold via commercials that utilized fast-moving scrolls of titles and artist names — later skewered in another Saturday Night Live sketch, 1981’s “Buckwheat Sings” featuring Eddie Murphy. Never one to miss an opportunity, by 1978 Popeil’s Ronco was hawking the Record Vacuum, a portable gizmo that would vertically spin an album while (allegedly) ridding it of dust and eliminating static electricity. “In fact, buy two or three,” suggested the commercial’s handsome young spokesperson strolling the aisles of a record store. “They really do make great Christmas gifts.”

Watch Popeil deliver his spiel during a 1994 episode of Late Night with Conan O’Brien here: