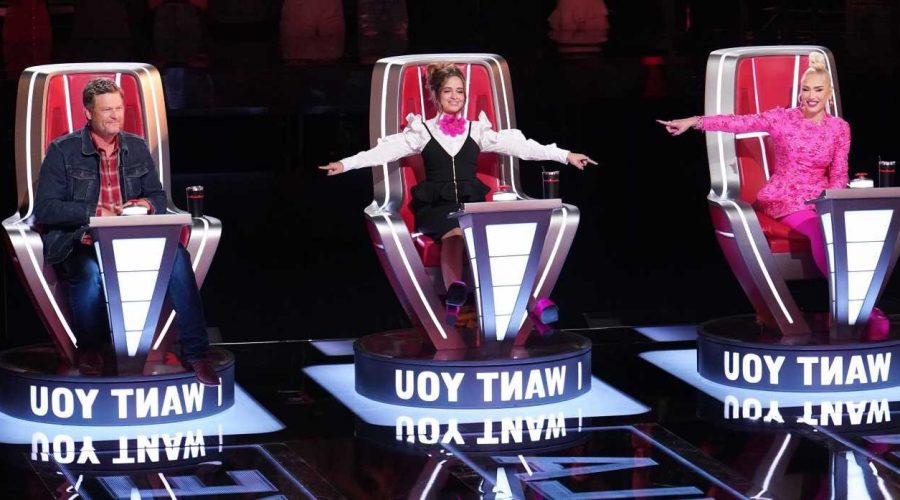 Since 2011, The Voice has remained a fan-favorite singing competition, known for the hilarious banter between all of the A-list singers who’ve sat in those famous spinning red chairs. The premise is simple: If an artist passes the blind audition, they choose their celebrity coach and move on to the competition part of the show. If contestants want to bring home the $100,000 prize and a record deal with Universal Music Group, though, they have to work hard — and follow a set of rules. From what goes on behind the scenes during the battle rounds to the contestants’ intense wardrobe makeovers, read on to learn everything there is to know about appearing on The Voice.

During the virtual casting call, singers have exactly one minute and 30 seconds to introduce themselves, explain the song they’ve chosen and belt out their chosen song’s verse and chorus.

Producers also reach out to local musicians across the country and ask them to audition, according to season 1 contestant Vicci Martinez. “What I realized is they wanted to make it a show that had real artists, people who were serious about doing music and not just people who sing in the bathroom,” Martinez told Cosmopolitan.

Duos and trios can register and compete, though this rule has caused some viewer backlash in the past. After folk trio A Girl Named Tom won season 21, fans debated whether groups have an unfair advantage against solo acts.

After passing the virtual casting call, it’s not time to sing in front of the A-list gang just yet. The pool goes from thousands to hundreds during callbacks in Los Angeles. That’s where producers listen to live performances and determine the TV-ready group of contestants they’d like to bring onto the show.

Some singers who don’t make it to the blind auditions return for another chance in later seasons. Ddendyl Hoyt tried out for season 5 and didn’t make the cut, but she came back and joined Shakira’s team the following year.

Season 6’s Kat Perkins revealed that the show provided her with training on every scenario imaginable, from getting sick onstage to handling social media attention. This seems to be something that the show has implemented over time, as season 1 contestants didn’t recall receiving such training.

For several days leading up to the big moment, singers are allowed to practice with the live band and camera-block with producers on the audition stage.

It may seem like the coaches listen to hundreds of singers in a single day on TV, but it’s actually not that many. Blind auditions tape “for five or six days with approximately 18 to 20 auditions per day,” former executive producer Audrey Morrissey revealed to SheKnows.

Despite rehearsing, nothing can fully prepare someone to audition in front of the coaches — and the huge audience cheering behind them. The room can get really loud, so it’s important to stay focused.

If a contestant is lucky enough to see two (or even all four!) coaches turn around, the decision that comes next is pretty difficult. Performers have to pick the coach they want to work with the most.

While it’s not exactly a rule, it is pretty fun. The stars often have a few tricks up their sleeve from season to season. When fighting over the same singer, they’ll often pull out all the stops to get someone to choose their team. From custom apparel to emotional serenades, they’ve tried everything.

“We shop for each artist to come up with great looks. Once we get to the live shows, looks are customized for each specific performance,” Morrissey told SheKnows.

For the most part, coaches select the songs throughout the season — even if the contestants don’t always agree. “It’s always hysterical when the judges say, ‘I don’t think that was a good song choice for you,’ and I’m thinking, You picked that song,” season 1’s Frenchie Davis told Cosmopolitan.

Coaches want to see their teams succeed, and more often than not, they make the right call. “Sometimes he suggested things that I wouldn’t have done and then they ended up being big moments for me,” season 16 winner Maelyn Jarmon said of John Legend when the two spoke to Country Living about the experience.

“I told her, I said, ‘[‘Hallelujah’] is gonna be the most streamed song of the finale,'” John recounted. “I was right about that.”

The chairs aren’t as loud as they appear to be on TV. That “whoosh” sound that happens when a coach hits their button and spins around? “It’s [added] in postproduction! You almost don’t notice it, especially when you’re focusing and singing to the crowd that’s in the studio,” Perkins told Cosmopolitan.

Coaches have a one-time opportunity to use their “steal” button for a singer who loses during the battle round — giving the contestant a second chance in the competition.

Coaches have a one-time “save” button that they can use to keep one of their team members safe following a battle round. There’s a catch: If another coach hits their “steal” button, the singer gets to choose whether to stay on their team or jump ship. “The coaches love that because there was jeopardy. People didn’t necessarily go back to the [team] they had been on,” Morrissey told Variety.

While singers don’t make a paycheck from performing on The Voice, they are given a huge platform, free publicity and celebrity access to grow their music careers.

Contestants who make it far into the season are given stipends to cover living expenses. They definitely don’t go hungry either, as previous contestants have raved about the show’s catering and additional food options like an on-set Starbucks.

Being on The Voice is a demanding experience, so contestants have to put their lives on hold — including their jobs. “Even though I worked as a film writer and played shows, I couldn’t do that while I was on The Voice. I couldn’t really work. No one can work,” Jessie Poland (who competed under the name Charlotte Sometimes in season 2) shared.

The Voice can change lives in more ways than one, especially for those contestants who make it far in the process. “I was engaged to someone at the time and we had to break up because of [The Voice],” season 1’s Vicci Martinez admitted. “I had just bought a house in my hometown [Tacoma, Washington], and I actually just ended up giving the house away and staying in L.A.”

In 2014, the New York Daily News obtained a copy of the 32-page contract contestants sign. Per the document, anyone can be edited in a way that “may be disparaging, defamatory, embarrassing (and) may expose me to public ridicule, humiliation or condemnation.” It’s worth noting that this contract is at least 8 years old, though, so this may have evolved since then.

Also in the contract from 2014? “Producer and the network … shall have the right at any and all times … to remove or replace me as a participant in the series, for any reason whatsoever, in their sole discretion.” NBC told the New York Daily News that while the clause is written in the document, “We have never manipulated the outcome on this show.”

Singers get to meet their competition and rehearse with their coach for four days, while filming takes about two additional days.

When dealing with busy celebrities, singers have to stay ready to perform, no matter the time. Season 1’s Vicci Martinez recalled once waiting until 3 a.m. for her then-coach CeeLo Green to rehearse and record three songs that would be uploaded to iTunes following that week’s episode.

The relationships you see on the show are very real — Blake Shelton has even given his personal phone number to his team so they can text him. Through the years, he’s also been known to invite his performers and fellow coaches over to his home for drinks and barbecues.

Even after the show gained traction, the celebrity coaches remained just as supportive. Adam Levine was available “24/7” through a special Voice-specific email and his assistant’s phone “even during the night before,” Perkins told Cosmopolitan.

Contestants have to be quick on their feet, and remain ready to perform at any moment’s notice. The show has “between 30 to 50 crew [members] performing set changes during commercial breaks,” Morrissey told SheKnows.

Just because someone receives the lowest amount of votes, that doesn’t necessarily mean that they’ll be eliminated. The “instant save” competition — in which the two lowest vote-earners perform new songs for America’s re-vote — decides who stays and who goes.

While they aren’t onstage, singers watch their competition from a press room in another building that’s a golf cart ride away.

“It was very abrupt,” Perkins revealed to Cosmopolitan. “Even with blind auditions, you spend weeks [training] with them and they’re gone. You can’t call or text.”

After being eliminated, contestants talk to a psychiatrist hired by the show. “It’s very needed because you’ll never go through anything like it again,” Kat continued. “It’s traumatic and you’re not really emotionally set up to do something that big that quickly.”

The host has such a busy schedule that he simply doesn’t have a lot of time to mingle with the contestants. “For the live shows, Carson does fly back and forth each week, spending Monday and Tuesday with us in LA and the rest of the week back in New York with the Today show,” Morrissey told SheKnows.

Being surrounded by such musical talent is a huge learning opportunity. “What they don’t show is all the coaching that comes from the staff: The vocal coaches, the band director, the producers, everyone has notes for you,” Hoyt told the Washington Post.

Between coaches, special advisors and performers, contestants are around celebrities all season long. When season 1’s Vicci Martinez returned to visit the set in season 9, the former contestant got to meet Rihanna. “She was so sweet,” she recalled.

From Melanie Martinez to country artist RaeLynn, many contestants who weren’t *the* winning voice of their season still grew a huge fanbase after appearing on the show.

While the $100,000 prize may sound nice, it’s the record deal with Universal Music Group that contestants are really after. It can lead to a great career, though that’s not always the case. The very first winner of The Voice, Javier Colon, parted ways with UMG after just one year, telling BuddyTV that there was an “unforeseen bad marriage between the label and I.”