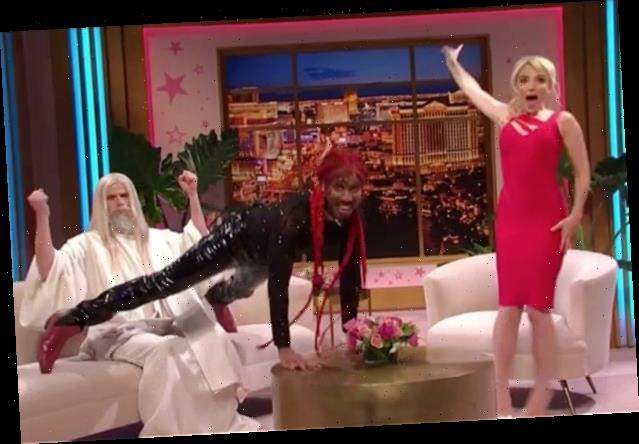 This week’s “SNL” brought back a gag from a few weeks go, with the talk show “Oops You Did It Again,” where people apologize for the things they did that freaked everyone out, hosted by Britney Spears (played as it was last time by Chloe Fineman).

It began with Chris Redd as Lil’ Nas X, who in real life outraged conservatives this week with a new music video which features him doing things like giving Satan a lap dance. He also made Nike mad with a pair of Nike sneakers made to look satanic. The gag ended with Lil Nas X making up for it by giving God an Easter weekend lap dance, though as Nas explained, that wasn’t the real God, it was just a friend of his in a costume.

Next was Kate McKinnon as Warner Bros.’ cartoon character Pepe Le Pew, who won’t be in the new “Space Jam” movie in part because his whole thing is kind of… rapey. McKinnon played Pepe as basically a problematic 20th century French intellectual chain smoking and gossiping, while also insisting he’s trying to improved also, that he’s in treatment for sex addiction.

Fineman’s Britney introduced Gaetz as “a hot mess and, as we’d say today, a full-on sex pest,” and as he game out Davidson said “Hi everyone. Giggity giggity goo,” a reference to ‘Family Guy’ character Glenn Quagmire.

Right off the bat the gag referenced Gaetz’s alleged history of dating much younger women, possibly teenagers. “My name is Matt Gaetz. Like Bill Gates, but with a Z at the end like a cool version for teens.”

“So this whole story is so bizarre, so incredibly Florida, that I need to get it straight,” Britney said. “You were dating a 17 year old and brought her own trips across state lines.”

“Prostitutes say you took ecstasy and had sex with them in Florida hotel rooms,” Britney continued.

“And your Republican colleagues in Congress say that you’ve shown them nude photos of women you were sleeping with,” added Britney.

“Which is not a crime! Just horrifying,” Gaetz replied.

But Fineman’s Britney said she can easily “spot a teen predator when I see one. After all I was on Mickey Mouse Club.”

Later in the gag, Davidson’s Gaetz tried to ally himself with Pepe and Lil Nas X, who wanted nothing to do with him.

“I am a cartoon skunk. You are United States congressman. Be better,” McKinnon’s Pepe said.

“You know what, maybe I should do a lap dance too. That’d be fun, right?” asked Davidson’s Gaetz.

“If you come anywhere near me, just remember I have hip-hop friends and country friends — the two populations that are guaranteed to own guns,” Redd’s Lil Nas X replied.

At the end of the gag, Lil Nas X was declared innocent. Pepe Le Pew was “not that innocent.” And as for Gaetz, Britney said she’s legally not allowed to declare him innocent or guilty, but encouraged the audience to “judge him by his face.”