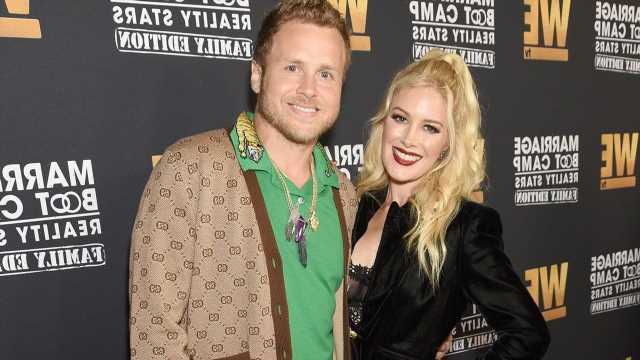 In case you were harboring any illusions that The Hills: New Beginnings is a tame reboot of the reality series’ original drama, Spencer Pratt and Heidi Montag are here to set the record straight.

The iconic reality TV couple sat down with ET’s Keltie Knight to discuss the second season of the MTV reboot, in which they felt a much more antagonistic vibe from the cast.

“I feel like Speidi’s on the chopping block a lot,” Heidi, 34, tells ET of this season. “I think there were a lot of high emotions and a lot of heightened things going on for everybody, so I think we were an easy target for a lot of people.”

Heidi says that she had no problem “turning up” and partying hard after a difficult year of lockdowns amid the coronavirus pandemic and was surprised when the rest of the cast didn’t respond well to it.

“I felt very judged and mom-shamed because we had just been through a pandemic,” Heidi explains. “We almost lost our business. We had a really hard time keeping employees, and we put all of our own money into PrattDaddy Crystals. It was a lot for us. So balancing that and a toddler and trying to have a new baby. There was just a lot going on for us and then feeling the pressure on and off camera from cast and production, it just was a lot.”

The trailer for the new season shows the couple disagreeing over trying for a second child. Spencer, 37, clarifies that he was just unsure about whether to try for another baby during the uncertainty of the pandemic, saying he was “scared” by all that was going on in the world. The couple has been trying to have their second child for months now and have yet to get pregnant, and Spencer blames some of the drama they experienced on the show for their conception struggles.

“Usually these shows are a lot — for us — more fun to film. This is the most stressful shooting of anything we’ve done,” Spencer shares. “I don’t think it’s anything to do with anything other than Heidi was so stressed out, dealing with more drama from behind the scenes, on camera, so I think that’s why we haven’t been able to get pregnant.”

The couple noticed a significant shift in how they were treated by their co-stars between the first and second seasons of the reboot. Spencer says that he thought the cast was under the impression that he was a secret executive producer for the first season and once they discovered he wasn’t, all bets were off.

“I would imagine if there was a season 3, it would be with an all-new cast because after this season, I don’t see how everyone would be able to be in the same room once this airs,” he says. “We don’t even know what people are saying in their testimonials.”

His wife agrees, noting, “This group, I feel like, holds grudges to the end.”

The couple says they think others noticed that they were portrayed in a positive light in the first season of the reboot.

“I don’t think anyone on our cast enjoyed that,” Spencer says.

“Which they have mentioned several times, like, why did you guys look so good?” Heidi notes.

“Maybe it was a coincidence, but it feels like a major shift this season,” Spencer continues. “It feels like 2009 again.”

Due to the COVID-19 pandemic, the series was shot in two separate chunks, one pre-pandemic and one post.

“Before the pandemic, we were filming for a few months and then obviously we shut down for almost a year, but the storylines were completely different of everyone’s realities they were going through and then we shut down and everyone pretended like none of that happened,” Heidi says. “And our lives hadn’t changed because we’ve been the same. Everyone else seemed to have had amnesia.”

The couple says that their co-stars didn’t take kindly to pre-pandemic content and comments being brought up again.

One situation that has stayed constant for the pair is their hope of having a second child. They also opened up to ET’s Katie Krause at a junket for The Hills about how their 4-year-old son, Gunner, feels about having a sibling.

“Gunner’s really ready,” Heidi shares of her son. “I think that’s part of why it’s like a little, or has been a little hard for me because he’s always like, ‘Where’s my baby? Where’s my baby?’ And I’m like, ‘Mommy’s trying really hard!'”

She adds, “We are actively, actively trying since December, so hopefully sooner than later.”

The Hills: New Beginnings season 2 premieres Wednesday, May 12 on MTV at 9 p.m. ET.