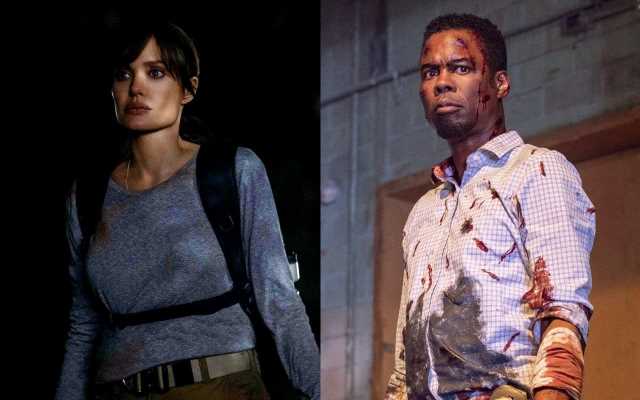 The latest ‘Saw’ film wins the race in the North American territory despite falling short of expectations, while the Angelina Jolie-led action thriller provides little competition.

AceShowbiz -“Spiral (2021): From the Book of Saw” has made its way to the top of North American box office. The latest and ninth installment of the “Saw” film series comes out as the winner of this week’s race despite falling short of pre-opening expectations.

Initially predicted to fall somewhere in the $12-15 million range, the horror film starring Chris Rock and Samuel L. Jackson only raked in an estimated $8.7 million on its first weekend. The pre-opening expectations were that this would fall somewhere in the $12-15 million range. Adding its $3.3 million income from other territories, the movie has so far collected $12 million worldwide, which hasn’t covered its production budget of $20 million.

Attempting to usher in a new direction for the “Saw” franchise by bringing it into serial killer territory, “Spiral” is deemed to be failing at “giving ‘Saw’ the major boost it needed to regain relevance” by critics. According to the review aggregator Metacritic, the movie received “generally unfavorable reviews,” while audiences polled by CinemaScore gave the film an average grade of “B-” on an A+ to F scale.

But “Spiral” still fares better than fellow newcomer “Those Who Wish Me Dead“. Boasting an impressive cast that includes Angelina Jolie, Nicholas Hoult, Aidan Gillen and Jon Bernthal among others, the neo-Western action thriller underperforms as it only earned $2.8 million on its debut weekend.

The Taylor Sheridan-directed pic arrives at No. 3 on the domestic chart as it provides little competition to its fellas. It also fell short of industry projections of $4-5 million, no thanks to its streaming debut on HBO Max on the same day of its theatrical release.

Critics’ response was actually mostly positive, with the movie earning an average rating of 5.7/10 on review aggregator Rotten Tomatoes. Audiences gave the film an average grade of “B” on an A+ to F scale, while PostTrak reported 68% of audience members gave it a positive score.

Elsewhere on this week’s chart, last week’s champion “Wrath of Man” falls one spot to No. 2 with an estimated $2.8 million. “Demon Slayer the Movie: Mugen Train” descends from No. 2 to No. 4 with an estimated addition of $1.8 million, while “Raya and the Last Dragon” holds on to the fifth position with approximately $1.7 million.