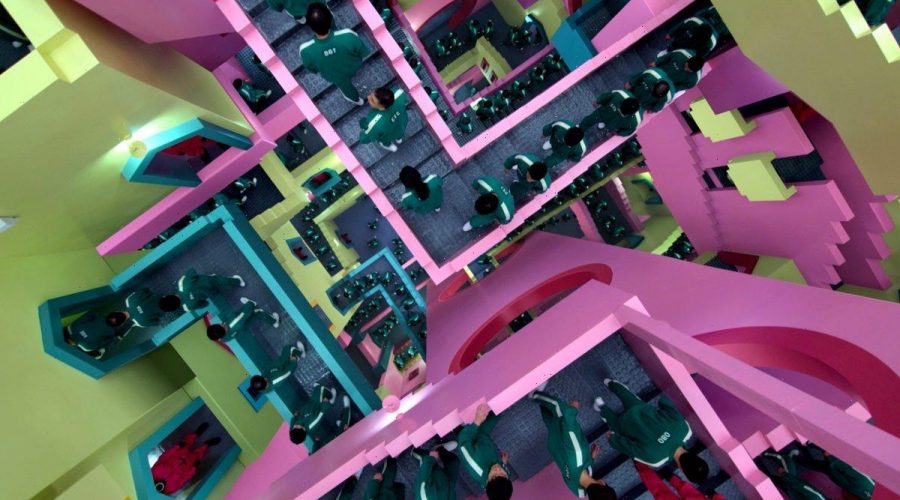 A lot of attention and thought went into the set of the Netflix K-drama Squid Game. Players enter various arenas set up for the contestants to play children’s games. The often brightly colored set contrasts with the bloody and violent nature of the games. After each game is completed, the competitors walk back to the warehouse, through an intricate criss-cross of brightly colored stairs. At times parts of this set had to be broken during filming.

The sets used for Squid Game have all kinds of hidden meanings. The contestants compete in a series of children’s games with deadly consequences for those who lose. During one game, players must choose a shape – either a star, circle, triangle, or umbrella.

They are then told that the challenge is to carve the shape out of honeycomb candy. When the contestants enter the arena, they find themselves in a giant playground. “When we were young, the playground seemed very big,” director Hwang Dong-hyuk explained in an interview. “So we built a giant playground for adults.”

In another scene, the players compete in tug-of-war on large platforms high above the ground. For the fifth game, they jump across glass stepping stones.

The walls of the staircase had to be broken at times

Before and after each game, the players walk through an enormous and complicated set of multicolored stairs. Art director Chae Kyung-sun mentioned that the staircases were influenced by the engravings of famous artist M.C. Escher. The set also had to accommodate hundreds of people at once.

Hwang discussed the eeriness of the staircase gradually becoming empty as more and more contestants died. “That gradual emptiness is also a very memorable element,” he said.

Apparently, it was also easy to get lost in the maze-like stairs. “It’s built like a maze so we had to break the walls sometimes because of operational issues,” Chae said. “The staff were worn out by the end of the day. They had to think about where and how to install the cameras in there.”

The ‘Squid Game’ cast reacts to the sets

The beauty of the set initially stunned the Squid Game cast. Lee Jung-jae who plays Seong Gi-hun, described the experience in an interview. “Entering the film set on the first day, we were busy taking pictures. The set was almost dreamlike.”

HoYeon Jung plays Kang Sae-byeok in Squid Game. She shared her thoughts on the set’s whimsical nature contrasted with the dangers of the games. “Being in the scene, it was very fantastic. It was like being in a world of fantasy. But on the other hand, the situation itself was very emotional, dramatic, and theatrical.”

Finally, Actor Park Hae Soo, who plays Cho Sang-woo, discussed the set used for the game of marbles. “The playground felt so real, like the actual back alleys of the past,” he said. “It was like being in front of the real homes of the past.”