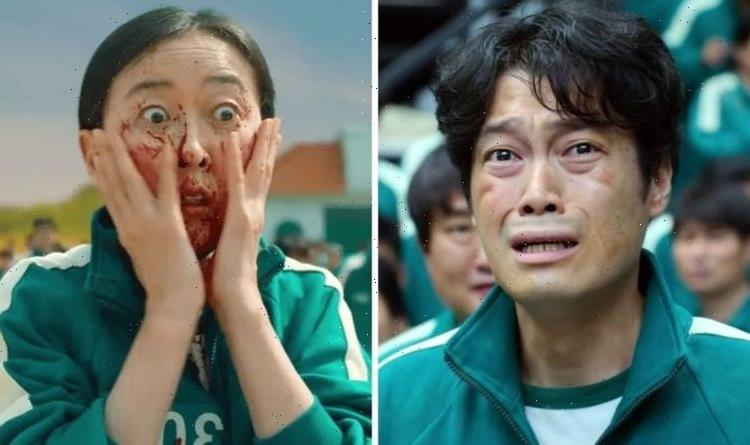 The new South Korean horror series has shot up the Netflix charts this past week. Squid Game may take inspiration from traditional children’s games, but, as comments on Twitter will prove, the series is definitely not for all ages.

Viewers have been shocked by the level of horror and violence in just the first two episodes of the new Netflix Original, Squid Game.

The disturbing dystopian drama series has become a surprise hit after all nine episodes were released to streamers last week.

Unfortunately, the otherwise acclaimed South Korean show from creator Hwang Dong-hyuk has also been met with its fair share of criticism.

For some, the unexpected gory moments in the opening episodes were too much to handle.

Many Netflix viewers flocked to Twitter to confess they wouldn’t be watching the series despite its overwhelmingly positive reception.

User @aprljoib said: “The others keep telling me to watch #SquidGame because everyone and their mothers have already watched it.

“Honestly, I will never force myself to watch something too violent just because it’s trendy.”

They also complained: “And also, does [every] episode have to be an hour long?”

And Dan Hanna said: “#SquidGame is good but I won’t recommend it to those under 20. It’s too gory.”

In the series, 456 struggling participants are forced to compete in a series of children’s games in the hopes of winning a huge cash prize.

However, the grisly twist is revealed when the players discover losers and cheaters will be killed by the masked guards prowling the edge of the arena.

Viewers knew they were in for an intense ride when one contestant was shot in the face in the very first episode, spilling blood over a nearby player.

The series only grows more disturbing from there, and it’s no surprise Squid Game has become a sensation amongst horror fans.

Over the last week, plenty of other viewers have committed to powering through in spite of the show’s gory premise.

@snowflower2494 said: “OMG Squid Game is so gory and intense at the same time but I can’t stop watching…it’s just so good.”

“I really planned to watch #SquidGame in increments but it is so engrossing,” Reid Harris Cooper said. “It’s so much more than I expected.”

“Yes, a violent brutal thriller but also a noir mystery, a character study drama and an ensemble comedy. I’m in for the full binge here.”

“Quirky, unconventional and quite often a bit gross. Love it.”

With Squid Game’s popularity still skyrocketing, there have already been rumblings of a potential second season.

While writer and director Hwang Dong-hyuk is open to the idea, viewers may need some time to recover before the second round of games commence.

Squid Game is available to stream on Netflix.