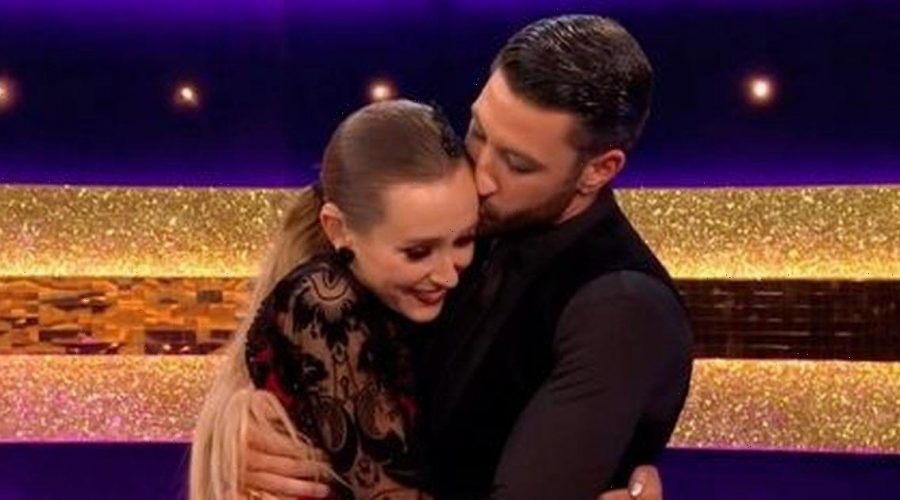 The 32-year-old was paired up with the EastEnders actress, 27, more than 12 weeks ago and throughout their time on the show their beautiful bond and mind-blowing routines have sparked romance rumours online.

But Strictly viewers were gobsmacked during Sunday night’s results show as they watched the Italian stallion give his dance partner a kiss in an emotional scene which fuelled speculation that the dancing duo are more than just friends.

After the pair received a perfect score from the judging panel for their fiery Argentine Tango, Giovanni became emotional as he gushed over his dance partner who he described as “a dream” to work with.

The handsome dancer then went on the cuddle the soap star before he planted a kiss on her forehead following their passionate routine.

Naturally, the intimate moment sent Strictly fans into meltdown as viewers stormed to Twitter to share their thoughts amid the ongoing romance rumours.

One viewer insisted: “Giovanni is madly in love and you’ll not convince me otherwise.”

Another urged: “Rose and Giovanni are a Hallmark movie waiting to happen.”

“The love @RoseAylingEllis and @pernicegiovann1 have for each other is so pure” a third gushed.

One fan of the show swooned: “Rose has brought something out in Giovanni that’s made me see him in a different light. It gives me the warm fuzzies to see how they adore and support each other.”

It comes after the pro dancer told the actress that she was his “everything” on Saturday night after they closed the show with another impressive dancer routine.

During the semi-finals, the final four couples were tasked with performing two dances in one week as they fought it out for a place in the live finals.

Last weekend, Rose and Giovanni performed a passionate tango to the song A Evaristo Carriego by Eduardo Rovira, and a Waltz to the song How Long Will I Love You by Ellie Goulding.

And despite facing an injury during last week’s training, Rose managed to smash it out of the park and wowed the judges and the viewers at home with both routines on the dance floor.

Unsurprisingly, the pair made it through to the finals of the BBC One competition alongside John Whaite and Johannes Radebe and AJ Odudu and Kai Widdrington after Rhy Stephenson and Nancy Xu were eliminated from the show on Sunday night.