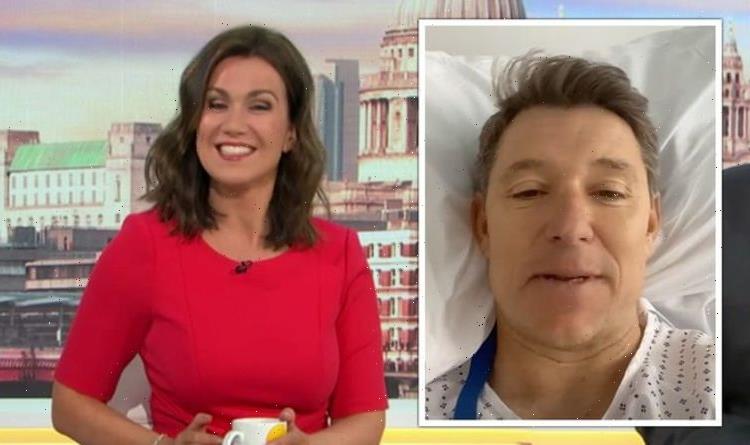 Good Morning Britain was hosted by Susanna Reid and Alastair Campbell on Wednesday morning and sent some well wishes to their ITV co-star Ben Shephard. Ben is currently in hospital recovering after having an operation on his leg. He, unfortunately, injured himself during a game of football.

ITV presenter Ben tore his meniscus, ruptured his ACL and fractured his leg.

Good Morning Britain shared with viewers a video clip of Ben in hospital, where he gave an update about his recovery.

In the video, which was also shared on Ben’s Instagram stories, the Tipping Point said: “Hi there everybody, thank you for all the amazing love and messages.

“For those who didn’t know I ruptured my ACL and tore my meniscus in my knee playing football.”

“That’s how it looks at the moment,” Ben said as he shared a look at his leg that had been marked orange following his operation.

“That’s not fake tan by the way. I promise, despite my Essex roots, I didn’t fake tan before my surgery.

“So they’ve repaired the ACL and the meniscus and now starts the rehab, the very slow, long rehab.

“However, I have to say, the painkillers seem to be doing the job right now,” Ben added.

He continued: “I can’t believe I broadcast on painkillers like this a few years back.

“Kate Garraway and Susanna Reid, what were you thinking letting me broadcast when I felt like this?” Ben remarked.

Back in the studio, Susanna shared some well wishes for Ben while he recovers.

“You’re always a consummate broadcaster Ben Shephard and good luck with the recovery.

“I know Ben’s going to be back in the studio very soon and he watches us still from the hospital bed.

“I’m sure he’ll be watching the game from there as well this evening,” she added, teasing ahead to the England Euros semi-finals match.

Susanna sent some support to her co-star, saying: “Lots of love to you Ben. Get well soon.”

“The ACL. You wouldn’t expect anything less from Ben,” Susanna remarked.