Peter Dinklage may be one of the most recognizable actors working today, but that doesn’t limit his range. As a clip reel of his nearly 30-year career in film and TV proved ahead of a tribute on the first day of the Telluride Film Festival, Dinklage can play a sensitive loner (“The Station Agent”) just as well as an icy mob boss (“I Care a Lot”) and the anarchic schemer Tyrion Lannister from “Game of Thrones.” The screening of his new movie that followed a brief onstage conversation, “Cyrano,” also proved that Dinklage can sing.

With musical ballads by The National’s Bryce and Aaron Dessner, plus Matt Berninger and Carin Besser, “Cyrano” positions Dinklage at the center of a colorful spectacle of high-contrast visuals and lavish Italian scenery. An enticing if often schmaltzy assemblage of bittersweet moments, “Cyrano” oscillates from mournful songs about soul-searching to brazen sword fights and dry wit before arriving at a tearjerker finale. Wright’s opulent style works in overdrive, but as usual, Dinklage outshines everything around him.

“We’re nothing without our writers and directors,” he said in a conversation before the movie moderated by NPR’s John Horn. “But I’d like to think they’re also nothing without us.”

Of course, Dinklage brings a distinct self-awareness to many of his roles with a keen awareness of the way his dwarfism informs the characters’ lives. Cyrano’s height seems to play a role in his estrangement and romantic frustrations, though it’s never stated outright. However, Dinklage actually launched his career by confronting problematic representations of little people onscreen outright. That was in director Tom DiCillo’s 1995 filmmaking comedy “Living in Oblivion,” in which a dyspeptic Dinklage plays an actor cast in a corny red room dream sequence designed to satirize “Twin Peaks.”

In a key scene, Dinklage loses his temper with the movie’s kooky director (Steve Buscemi), shouting: “The only time I’ve seen dwarves in dreams is in stupid movies like this!”

Dinklage still looks back fondly on that moment. “It was a quick intro into what I’ve always felt,” he said. “That anger was what I was feeling.” He acknowledged that the rant was a direct response to the Man From Another Place played by Michael J. Anderson throughout “Twin Peaks,” starting with its first season in 1990. “I love David Lynch,” Dinklage said, adding that he thought Anderson’s performance “was beautiful, but it’s complicated, so you can take the piss out of it while admiring it. That’s our prerogative to do that.”

Dinklage added that “Living in Oblivion” marked the only time he ever had to audition for a role. “This isn’t bragging,” he said. “In weird ways, it’s kind of easier for me — harder but easier.” Still, it wasn’t until his breakout role in Tom McCarthy’s 2003 “The Station Agent” that Dinklage’s career really took off.

“Just because you did a movie didn’t mean anything, especially for someone like me,” he said. “I thought I’d go back to my day job and pay the rent. Because New York City was expensive, you had to hold onto that idea.” After years of development, the movie ultimately garnered rave reviews out of Sundance and went on to gross $500,000 in limited release. “We had no idea what the hell people would think of it, but we put our heart and soul into it and it paid off,” he said.

Asked about roles in which his characters are mocked for their height, Dinklage said that he works to diffuse any tension onset from people worried they might offend him. “I think you have to sort of clear the air to make people comfortable,” he said. “It’s OK to laugh at me, with me, the character’s rage or humor, and then we can move forward. Not that I’m some sort of pioneer, but I think it’s important for all of us to have a sense of humor about it and then we can open up a discussion about it. The problem is that sometimes people aren’t allowing that in and therefore don’t know how to reckon with it.” 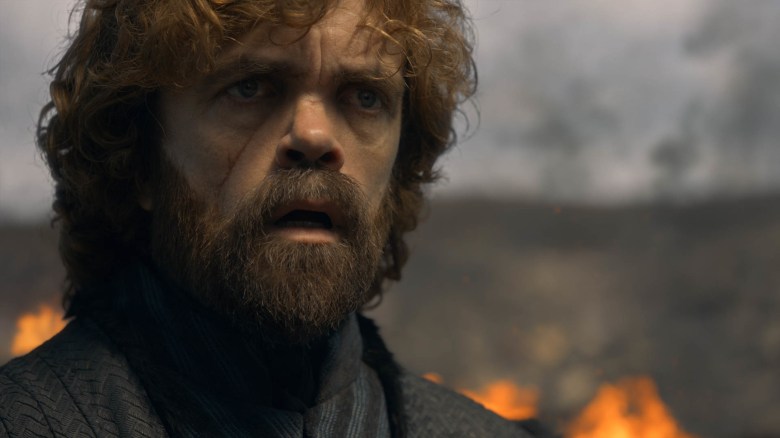 On the subject of “Game of Thrones,” Dinklage reflected on his initial hesitation to the offer for the fantasy show in fear of a stereotypical character with “a really long beard and pointy shoes.” Dinklage cited the archetype as stretching back to J.R.R. Tolkien’s “Long of the Rings” series. “That is just what followed the fantasy genre for people my size,” he said. “Why do we always have to follow that boring fucking formula of pointy shoes and a beard? Who invented that? Why are we still following that? We don’t need to. I said that to them.” He became more confident about the part once he learned about the source material. “I didn’t know anything about Tyrion. I didn’t read the books or anything,” Dinklage said. “I was just being an asshole.”

These days, Dinklage does a fair amount of producing through Estuary Films, his production company, which signed a first-look TV deal with Entertainment One last summer. “The older you get, you feel lucky enough to work with great writers and directors,” he said. “I want to see their visions through and take a backseat. You start off acting in them, but then you slowly reel it back and hide behind the curtain.”

03/09/2021 TV & Movies Comments Off on Telluride: Peter Dinklage Says ‘It’s OK to Laugh at Me’ and Recalls Mocking ‘Twin Peaks’ in His First Role
Lifestyle