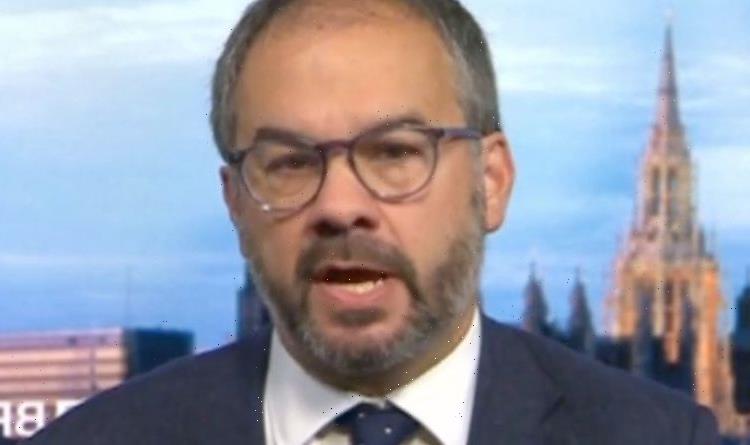 Paul Scully has been put on the spot by BBC’s Sally Nugent over UK’s national living wage, who said the increase wouldn’t feel like one because “everything else will feel so much more expensive”. The grilling came after ministers accepted the Low Pay Commission’s recommendation for a 6.6 percent increase from £8.91 to £9.50 an hour from April in bid to end low pay. Speaking on BBC Breakfast, Ms Nugent said: “Let’s Talk a little bit about the national living wage, which you mentioned a moment ago.

“UK hospitality-they’re saying that they’re already paying higher prices, and that when the pay rise comes in they will then have to pass on that to their customers again, pushing up prices for already squeezed families.

Mr Scully said: “I think there’s a combination of things. I speak to the hospitality sector all the time as the Minister for Hospitality Recovery.

“I know that the issues that they raised around business rates about VAT and all of these other pressures that they have.

“But nonetheless, what we can’t do is build a recovery on the back of the lowest paid in society.

He went on: “We want to make sure that we can end low pay, by 2024, by getting the national living wage up to two thirds of the average median wage in this country.

“And so, hospitality and other sectors need to make sure that they can continue to invest in people, because they don’t have a business without those people.”

The presenter said: “I just go back to a point I made earlier which is that you’re talking about bringing up the national living wage.

“That won’t feel like an increase because everything else will feel so much more expensive.”

Mr Scully said in response: “Well we know there are pressures, we know that there’s a difficult time for the economy, for people in the country in terms of the cost of living and it’s one of a suite of measures.

“So we were keeping the energy price cap.

“The Chancellor announced the Household Fund, which is targeted at the most vulnerable in society-500 million pounds that have been delivered by local authorities to keep energy prices low to keep food prices low for those people most affected.”

The Government says the rise represents an increase of about £1,000 a year for a full-time worker.