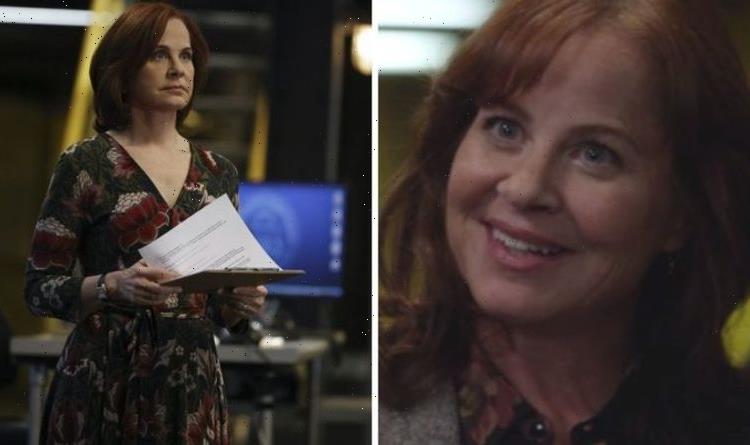 After a shocking end to a gripping season, The Blacklist is set to return to NBC with the highly desired ninth instalment. In anticipation, fans have been speculating what the season could entail including whether Cynthia Panabaker (played by Deirdre Lovejoy) will be revealed as the Blacklister.

With the knowledge of a government mole, fans are convinced United States Marshal Panabaker will be exposed as the Blacklister in the upcoming season.

Taking to Reddit, one fan IncaOdin shared why they believed she could be the mole: ”There is still the high level gov mole in play and she has the acting chops to pull off a great villain.

“We’ve been seeing Panabaker onscreen for many seasons so her being a big bad would be interesting, but then she’ll end in prison or dead and then gone.”

Panabaker made her first appearance on screen in season three when she was escorting Elizabeth Keen (Megan Boone) to the federal courthouse.

Although she was met with a rebuttal from Peter Kotsiopulos (David Strathairn) and Laurel Hitchin (Christine Lahti) she proceeded and proved them wrong.

Despite this fans are certain she could be a high-level mole paid to keep an eye on the group and all their tasks.

While the FBI task force has a responsibility to stop every blacklister, one may have slipped through the cracks.

The Blacklist first came to be when high-profile criminal Raymond ‘Red’ Reddington (James Spader) told the FBI he had a list of all the most dangerous criminals in the world.

He was willing to share the details of the list of people he spent 20 years with, in exchange for immunity from prosecution.

Red claimed the individuals were so dangerous even the United States government had no inkling about their existence.

With the list later drawing their attention, it’s unsurprising they could’ve sent Panabaker to be their mole and to report everything back.

As the task force has revealed the identities of the imposters in the past, if the theory comes true Panabaker could be their longest-running mole in history.

As the actress confirmed she would be returning to screens for season nine and this is where fans believe she will be exposed.

Another fan took to Reddit to explain: “So Congressmen used to believe that there is a mole that is deeply embedded in the highest levels of the US government and has been there since the end of the Cold War.

“This person would be the same age as Red. Cynthia Panabaker points all these But fits the description,” they added.

When moles were previously discovered in the task force they were either found dead or completely gone.

In season one, multiple were discovered, fans will remember how Meera Malik (Parminder Nagra) was killed by an assassin after she gathered the information for Diane Fowler (Jane Alexander).

This was the same in season three when Samar Navabi (Mozhan Marnò) was caught and identified as the person sending information to the Mossad.

In response to the theory another user, jujotheonqueror wrote: “I love Pannabaker but I feel certain there’s more to her than we know. Maybe she’s a big bad (she’d be fantastic) or maybe she’s not. We’ll have to wait and see. Can’t wait!”

Patients fans will finally reap their rewards as season nine will be returning later this month, and hopefully, the identity of the mole will be revealed.

The Blacklist season 9 premieres on Thursday, October 21 on NBC. A UK release date is yet to be announced.

12/10/2021 TV & Movies Comments Off on The Blacklist season 9: Panabaker to be exposed as Blacklister as fans spot huge clue?
Lifestyle