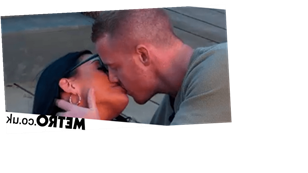 The Cabins picked up the steam during its second night which offered the first kisses of the series.

Tuesday night’s episode of ITV2’s new dating show got to work within minutes, showing Tom and Olivia sharing their first kiss during a romantic date.

Wrapped up with blankets and admiring the view outside, Tom broke the momentary awkward silence and went in for the kiss, grabbing Olivia’s face with both hands and sealing the deal.

However viewers noticed Olivia seemed a bit off and she later explained that she has her guards up after being hurt in past relationships.

‘I am [happy] but I would rather you not be the complete type,’ Olivia told a confused Tom.

She continued: ‘[It’s] nerves. I am not my crackpot self. I’ve got a massive barrier, a massive big wall you need to break down. It could take you a long time.’

Tom managed to crack the mystery and said: ‘I have a feeling that your normal guy that would not do much for you, not give much back, the kind of guy that would sit back and expect the world.’

Olivia admitted: ‘To me it is normal, that’s all I’ve had. I expect a dickhead who is nice but not amazing and to me you’re amazing.’

‘You deserve the world, everyone [does].’

Olivia went on to explain that she’s also been affected by watching her mum get hurt in relationships.

Viewers were loving the tender moment between the two and praised Tom’s supportive nature, with one reacting: ‘Tom is such a king I love him.’

Another agreed: ‘Tom and Olivia. I ship so much.’

Analysing Olivia’s situation, one said: ‘You can tell Olivia has low self confidence in herself, she needs a good man like Tom, not some bastard who’ll treat her like shit and demean her.’

On a less emotional note, things between Sarah and Charlotte reached the next level as they shared kisses in bed.

However, it was the end of the road for Abraham and Sofia who struggled to find a romantic connection and made the mutual decision to end their time together, thus sending themselves home.

The pace continued to go slow for the pair as they continued sleeping separately.

Sofia broke down in tears while speaking to her friend on the phone, explaining that she was getting mixed signals and couldn’t tell if Abraham’s tears about her father who is sick was genuine as he also suggested he didn’t want a girlfriend.

The Cabins airs weeknights at 9pm on ITV2.

06/01/2021 TV & Movies Comments Off on The Cabins first kisses with Sarah, Charlotte, Tom and Olivia
Lifestyle