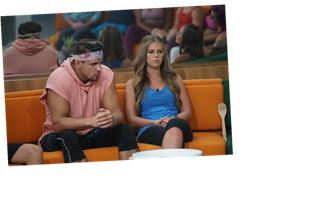 The Challenge star Fessy Shafaat dated Big Brother co-star Haleigh Broucher for nearly two years until she announced the couple parted ways in July 2020. After the Jan. 6 episode of Double Agents aired, Haleigh claimed she and Fessy were dating when he left to film the show. However, he refuted her story in a video where he opened up about the breakup for the first time.

A few months after their separation announcement, Fessy competed on The Challenge 36, where he seemingly got close to other female competitors, including Tori Deal and UK rookie Gabby Allen.

Following the Jan. 6 episode, Haleigh opened up more in a note on her Patreon account. The Big Brother star claimed she and Fessy were in a relationship until she received a phone call shortly before filming ended telling her otherwise.

Haleigh claimed she went apartment shopping for them and planned on picking him up from the airport to start a new life together.

Fessy on why he and Haleigh began having problems

The two-time Challenge competitor hadn’t spoken on his separation with Haleigh until after she released her most recent statement. He chose to open up about it after the Jan. 6 episode in a Patreon video where he explained he wanted to move in with her following their time on Big Brother together.

According to Fessy, she wanted to stay in Texas for the next eight months to finish college before securing a place. However, the former football player claims her family and friends didn’t like him and said he had to sit by himself at her graduation, which upset him.

Additionally, Fessy said he believes she listened to the people who didn’t care for him and changed her mind about moving in with him after looking at places together. The Challenge star stated he still wanted the relationship to work, and they tried again before he filmed last season.

After returning home, Fessy claims Haleigh wanted him to move into her apartment, but he refused because he wanted them to get a bigger place together.

According to The Challenge competitor, the distance became harder on their relationship, and “trolls” began sending Haleigh messages about him when he went to clubs with his friends. He claims the messages bothered her, which in turn affected their relationship.

Fessy explained she then posted the breakup announcement without talking to him first. Therefore, he said he didn’t speak to her for a couple of weeks until he surprised her by showing up at her apartment shortly before leaving for the current season, Double Agents.

According to Fessy, the two spent a week together and discussed their relationship. He wanted her to announce they reconciled, but he says she refused. When he went on the show, Fessy claims he told the other competitors that he and Haleigh had broken up and would’ve posted if they got back together.

While he denied being romantically involved with Tori Deal, he and Haleigh have likely broken up for good as Fessy claimed she wants to move to a state where he feels he can’t thrive. The Challenge 36 airs Wednesdays at 8/7 Central on MTV.