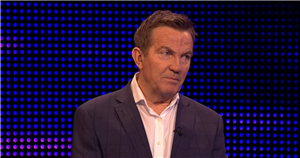 The Chase viewers have been quick to comment on a striking resemblance between one of Thursday night's contestants and a certain Hollywood actress.

Fans of the ITV show have pointed out that blonde Michaela, who made it all the way to the final round, looks rather like actress Jodie Foster.

Michaela introduced herself as a 37-year-old sales assistant from Hampshire, which is a far cry from the A-list lifestyle that Jodie Foster leads.

The American actress, director, and producer was regarded as one of the best actresses of her generation and starred in films such as The Accused, Taxi Driver and Bugsy Malone.

The Chase viewers then took to Twitter to revel in the realisation with one saying: "Michaela is the love child of Jodie Foster and Elizabeth Moss!"

A second said: "She looks a bit like a young Jodie Foster? #thechase"

While a third added: "Stephanie looks a bit like Jodie Foster…. #TheChase" while posting a picture of the actress alongside the tweet.

And a fourth penned: "If Jodie Foster and two short planks could produce offspring… #TheChase"

This comes a day after The Chase fans were admiring one of the contestants, Ed, a Marine Biology PHD student and they wanted to know if he was single.

Viewers were quick to praise him, and rushed to Twitter to ask about his relationship status.

One tweeted: "Is Ed single though?"

"Well I must say Ed is rather cute and sexy," admired one viewer.

Ed revealed he loves to play music in a band at weekends, and hoped to spend any prize money on a synth to make "weird noises".

The student only managed to get £3,000 in the cash builder, and said he wanted to face The Dark Destroyer.

His wish wasn't granted, as he went up against Darragh Ennis, "The Menace", much to the excitement of fans.

Ed decided to stick with his £3,000 rather than taking the high or low offer.

The cash builder didn't go well as he got the first question wrong about the colour of a badger's stripes, which seemed to throw him off.

Sadly for him, he stumbled over questions and ended up being caught.

But Ed shouldn't feel too bad, as Darragh was on fine form and saw off the next two contestants too.

The remaining contestant went for the high offer of £50,000, deciding to "go big or go home."

He unfortunately ended up being caught too.

The Chase airs weekdays on ITV at 5pm