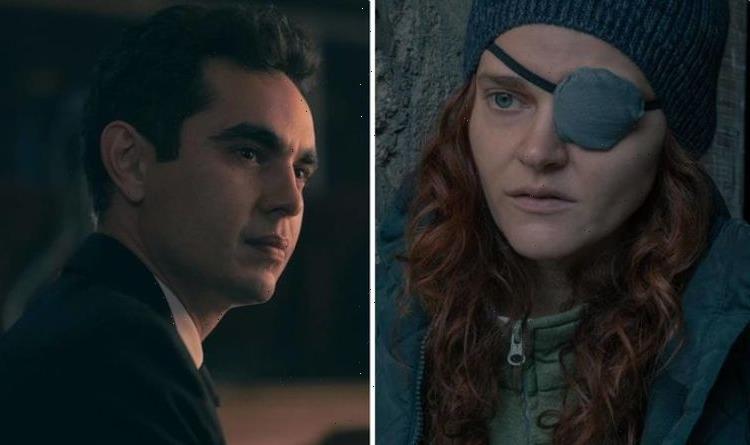 The Handmaid's Tale: June Osborne prepares for trial in teaser

The Handmaid’s Tale season four has already finished airing on American streaming service Hulu for those living Stateside. However, Channel 4 is still playing the latest season out in the UK with June Osbourne (played by Elisabeth Moss) and Janine (Madeline Brewer) on the run from Gilead.

WARNING: This article contains spoilers from The Handmaid’s Tale.

June and Janine found themselves caught up in a bombing, much to their shock as they did their best to run away.

Following the blast, June was reunited with best friend Moira ( Samira Wiley) but Janine was nowhere to be seen.

There is the chance that Janine was killed during the explosion but some fans have an alternative theory that will play into season five.

Taking to community forum site Reddit, a fan questioned what happens to Janine next.

One viewer stated: “I seem to be the only one who doesn’t think she’ll become a Jr. Martha or the start of the Pearl Girls.

“To keep her in the central narrative, she’ll likely need to be placed with either Nick or Lawrence.”

Agreeing with the theory, another fan commented: “I would love to see Janine as Nick’s handmaid, for exactly the same reason as you.

“If Nick marries a widow who has no children from her first marriage then she would likely be considered infertile regardless of her age, so every possibility he could get a handmaid fairly soon.”

But not everyone thought this would be the next plot for season five as it wouldn’t make sense with the timeline.

They explained: “I feel like Commanders would (or logically should) be married to women <40.

“Also Nick’s been married for several months now so presumably would have been assigned a Handmaid by now if his wife was >40.” [Sic]

DON’T MISS…
Eric Morecambe told to DITCH Ernie Wise by BBC as pair were ‘outdated’ [EXPLAINER]
Clive Owen net worth: How much is Amanda Owen’s husband worth? [NET WORTH]
Emmerdale’s Mandy Dingle for new romance with unlikely character? [SPOILER]

However, there has been no talk of actress Brewer leaving the drama any time soon.

So it is presumed she will be back for season five when it does originally premiere on Hulu.

Sadly, it will probably be quite some time before any more new episodes of The Handmaid’s Tale come out.

At the end of last year, Hulu revealed that The Handmaid’s Tale would be back for a fifth season.

Taking to the streamer’s official Instagram account for the announcement, actress Moss said: “I’m also thrilled to announce that we’ve been picked up for season five.

“It’s my privilege and honor to tell this story. … It’s going to be a wild ride.”

As of yet, a release date for series five hasn’t been announced but it is predicted it won’t premiere until spring 2022 at the earliest.

The Handmaid’s Tale is available to watch on Channel 4 and Hulu.