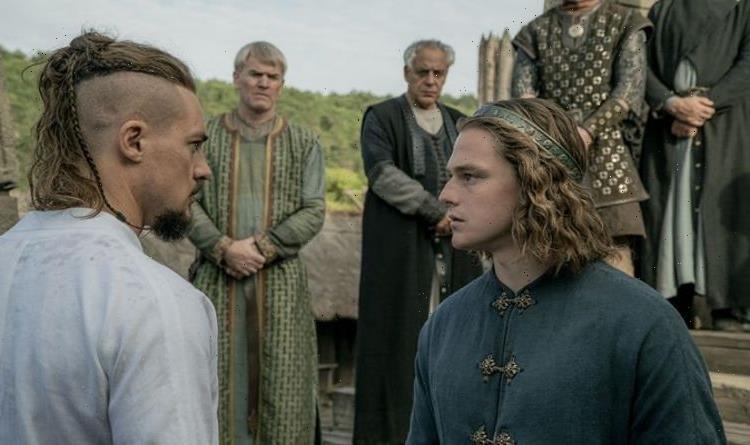 The Last Kingdom season five is on the way to Netflix and viewers are excited to see Uhtred of Bebbanburg (played by Alexander Dreymon) return. At the end of season four, Uhtred helped King Edward (Timothy Innes) save Winchester from the Danes. But his luck may be running out and fans are wondering whether he will die in the upcoming season.

The Last Kingdom season five will sadly be the final outing for the long-running historical drama.

The series is based on The Saxon Stories by Bernard Cornwell, and fans are wondering how much the books will influence the final season.

At the end of season four, King Edward started to show signs of weakness as his kingdom was attacked by Sigtryggr (Eysteinn Sigurðarson).

Luckily, Uhtred was on hand to save the day and he managed to negotiate with the Viking warlord and save Winchester.

Uhtred was later left to look after Edward’s eldest son Aethelstan (Caspar Griffiths) and raise him as the next heir.

Aethelstan will eventually become King of England, but will it be before the end of the fifth season?

Fans believe Edward will die at some stage in season five, paving the way for Aethelstan to take the crown.

In the books, Edward dies of an illness, with his last appearance being in Sword of Kings.

This is the 12th book of the series, but season five is believed to only be based on books nine and 10.

With this in mind, it is unclear whether the timeline will be sped up in the TV adaptation.

The real-life Edward the Elder died in the year 924, at the royal estate of Farndon, near Chester.

He was buried in Winchester and his remains were later moved to a new church, along with those of his parents.

With this in mind, Edward may still be alive before the series ends, unless the timeline is sped up.

It is not clear whether the creators of the series were prepared for season five to be the final season.

No official reason has been given as to why the show is ending after the fifth outing.

This may mean some of the characters’ storylines were left open with the intention of their stories continuing in future seasons.

Hopefully, more information about the final season, including an official release date, comes to light soon.

Fans were upset to hear the series would be ending so soon as they are keen to hear more of the story.

One said on Reddit: “There is no closure. Vikings did the same thing about the Scandinavian Pirates Reign of Terror coming to an end.

“The Danes are almost totally defeated, the Norse keep trying but their invasion attempts get weaker. Sigtryggr and his brother are about the Norse getting kicked out of Ireland.

“King Edward consolidates his power and gets stronger. Aethelflaed dies in 918 AD. The end of Season 4 is 911 AD.

“Season 5 is opening about 914 AD. The close of Season 5, end of book 10 The Flame Bearer, may be with Aethelflaed’s death, even though she doesn’t die until the beginning of book 11, War of the Wolf.” [Sic]

One of the big questions fans have is whether Uhtred will finally claim back Bebbanburg before the series ends.

Another viewer said: “I think the main closure I’m looking for is Uhtred reclaiming Bebbanburg. I’m not really expecting all of England to unite by the end of the show or the Danes to be permanently defeated. But as long as Uhtred finally gets what he’s been after since the first season then I will be satisfied.”

The Last Kingdom season 5 will arrive on Netflix soon.

13/07/2021 TV & Movies Comments Off on The Last Kingdom season 5: Will Edward die before the series ends?
Lifestyle