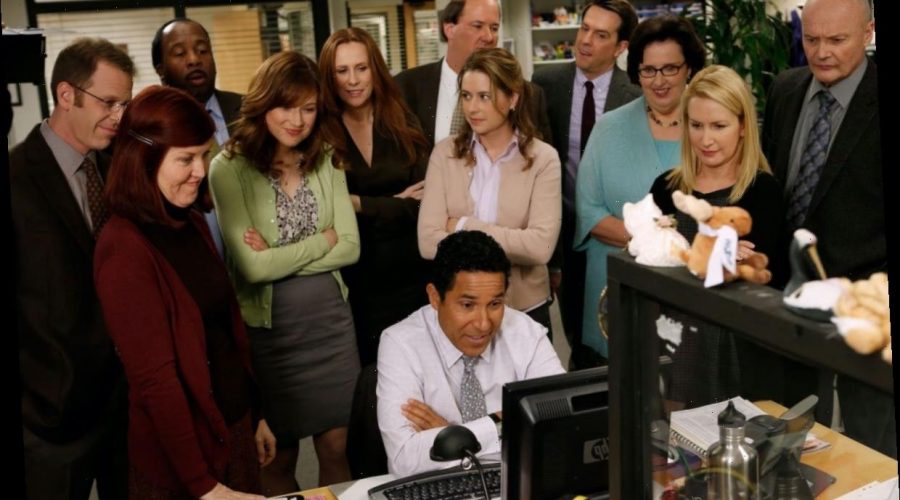 When worlds collide! The Office and the Kardashians share a bizarre connection — specifically, the character Phyllis Vance and both Kim Kardashian West and Khloé Kardashian all have something in common.

Phyllis Vance and the Kardashians made the same fashion choice

It’s hard to imagine that Phyllis on The Office and the Kardashians would share the same style, but it did happen on one occasion.

In a season 8 episode of The Office, the Dunder Mifflin employees are invited to boss Robert California’s house for a pool party. Phyllis is seen sporting a chic chevron printed cover-up over her bathing suit.

It turns out, Kim sported the exact same Lotta Stensson cover-up/caftan over a black bikini in Miami in 2010 and a KUWTK fan shared a screengrab of Khloé wearing the robe as well.

In a 2017 Reddit discussion, one fan of The Office posted the side-by-side comparison of Kim and Phyllis that asked, “Who wore it better?”

Fans found another Kardashian-Jenner and ‘The Office’ connection

In February 2020, Khloé shared photos of the baby shower she hosted for pal Malika Haqq. One of the pics, featuring Kris Jenner, was giving fans some serious The Office vibes.

Khloé held the bear themed party for Malika at the Waldorf Astoria hotel in Beverly Hills, of course pulling out all the stops for her BFF. Every party thrown by (or held for) a Kardashian-Jenner has a theme and color scheme and this party was elegant in neutral colors, with guests wearing coordinating cream and brown tones.

A Reddit post made the hilarious Office connection, with a side-by-side photo of Kris standing in front of a wall of brown and gray balloons, compared to a photo of Jim arriving to the conference room to find Dwight’s lackluster decorations for Kelly’s birthday party.

John Krasinski and Rainn Wilson couldn’t get through the scene

While the Kardashian-Jenners are definitely better at party planning than Jim and Dwight turned out to be, it made for a hilarious episode of The Office.

It was so hilarious, it turns out, that Kraskinski and Wilson couldn’t get through filming the conference room scene and production had to be shut down so they could stop laughing long enough to film it again.

In his 2016 book The Bassoon King: Art, Idiocy, and Other Sordid Tales from the Band Room, Wilson said this scene proved to be the most difficult to film.

“The longest inappropriate laughter was during the episode ‘Lecture Circuit,’ when Dwight and Jim are put in charge of the Party Planning Committee and Dwight hangs tiny brown and gray balloons and a banner that reads It Is Your Birthday,” Wilson explained.

He continued, “John and I literally could not stop laughing. We laughed until we cried. Production needed to be shut down for a twenty-minute break while we gathered ourselves and returned to film the scene.”