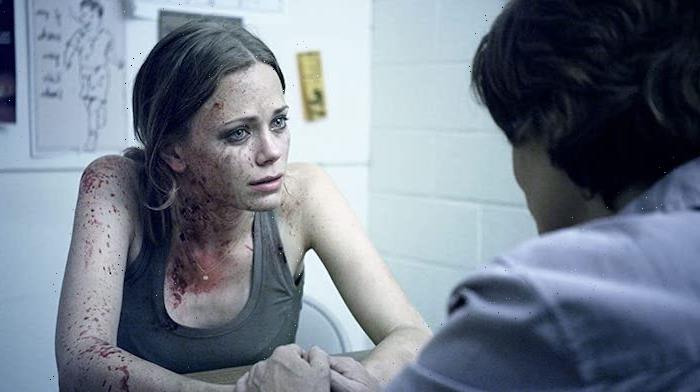 (Welcome to Scariest Scene Ever, a column dedicated to the most pulse-pounding moments in horror with your tour guides, horror experts Matt Donato and Ariel Fisher. In this edition: one of the scariest scenes in Banshee Chapter may grab you when you least expect it.)

In the comprehensive discussion of H.P. Lovecraft adaptations, Blair Erickson’s Banshee Chapter is often overlooked since the script merely mines From Beyond for influences — but it deserves a footnote mention. I can still remember my first viewing back when screeners came via mail as DVDs you’d pop into your player. My bedroom door was shut tight not to disturb slumbering roommates, lights switched off, and horror atmospheres cranked to optimal settings. How creepy could this sci-fi horror flick about government experiments and hypnotic broadcast signals prove itself?

Spoiler alert: this is /Film’s “Scariest Scenes Ever” column.

As my comforter inched closer to my eyes, Banshee Chapter showcased the efficiency of jump scares through a blend of first-person camera angles and unparalleled horror of the most intimate independent means. Erickson uses the screen as a thin barrier between the viewer and shadowy figures by framing countless sequences with close-up perspectives, which becomes a flinch-worthy assault as ghastly visions invade our personal spaces. Y’all, I was petrified watching Banshee Chapter alone as a much fresher-faced horror critic — no shame in that admission. It was hard to pick just one favorite scare when three stood out upon my latest rewatch, but one reigns supreme after a few more nightmares drove that realization home.

Anne Roland (Katia Winter) is an intrepid online journalist who’s investigating the disappearance of her writer friend James (Michael McMillian) after the latter ingests drugs supposedly used during the U.S.’s Project MKUltra studies. Anne contacts Hunter S. Thompson-type Thomas Blackburn (Ted Levine) in the hopes he’ll supply the dimethyltryptamine-19 (DMT-19) formula in question. If Anne can expose the secrets of an unspeakable part of American history, maybe she can uncover James’ whereabouts. If not? James will be lost forever to a classified substance that reportedly operates as a beacon with otherworldly connections.

The Story So Far

At this point, Anne has already interacted with Thomas and he’s invited the persistent questioner over for a DMT-19 session. Chemist and mixologist Callie (Jenny Gabrielle) provides the narcotic that Thomas tricks Anne into consuming, and immediately they hear the same eerie song James heard before his vanishing act. Then something breaks into Thomas’ house, kills the power, and turns Callie into this pale-faced figure that spews blood before everyone falls unconscious. Thomas and Anne rise, Callie nowhere to be found, their safety in question, but no immediate threats remain for the moment.

In search of answers, Anne drives Thomas to Callie’s basement laboratory for anything useful. She glimpses the chemical composition of DMT-19 written on Callie’s board, confirming the anonymous voices heard over radio frequencies are relaying DMT-19’s ingredients. Anne starts cycling through security camera footage, searching for clues, which leads to a startling discovery once she realizes the video timestamp. Thomas is still outside, mind you, crippled by side-effects that lead to one of my favorite lines of dialogue since Banshee Chapter’s release: “Can we go already? It’s 2:45 in the morning, and my eyes are bleeding!”

Anne sleuths in solitude under greenish night vision hues, scouring through WatchfulEye security footage that ends on September 30th. Anne observes as the final video begins where she previously noticed the first surveillance camera not far from the basement, which displays blackness until a mutation shambles down the hallway — presumably Callie, but her physicality is far more alien than human. The cameras follow whatever Callie’s become down the wooden stairs and into the pitch-black shadows next to the same flight of steps Anne used upon entry. Callie vanishes into the darkness, which causes Anne to radio Thomas out of panic.

“I can see the footage; it’s by the stairs.” Anne balks a second and cranes her neck closer to the monitor that reads a timestamp. “Eight minutes ago,” Anne slowly utters as cinematographer Jeremy Obertone holds on a visibly tense trespasser with the same patch of suspect blackness framed over Anne’s shoulder. Her breathing hastens as she rises to a standing position while refusing to make eye contact with the danger area she must now pass to escape.

A diabolical turn of events.

Anne finally musters the courage to at least face the staircase and the blackout on the left, calling Callie’s name a few times with no response. You can tell Anne’s hesitance and paranoia is near-paralyzing, and yet her flight instincts must persevere. She begins inching with shuffle-steps towards her exit, still speaking Callie’s name, as the camera presses almost against her back in close proximity. I recall [REC] at this moment, and that unshakable attic jump scare in the way we know something nasty will lunge towards the lens, but the length of time it takes almost convinces us maybe we’re wrong. Anne sure hopes nothing patiently awaits a timely attack.

Once Anne reaches the stairs, she stops shouting Callie’s name — sound design goes quiet, barely even the faintest wind whistle. She conquers one step, the next, then another. Anne could potentially ascend without evil intervening, but what fun would that be?

A deformed arm reaches through the banister and grabs Anne’s leg, but she’s able to shake the thing’s grasp. There’s something inhuman in that basement, yet Anne doesn’t stick around as she yelps a most fearful scream and bolts upstairs. This scene, a monster in hiding, is precisely why I sprinted over my basement staircase as a kid like it was an Olympic trial so no boogie-oogies could clutch my ankle and drag me into their den.

I’d be lying if I said this movie didn’t creep me out when I first saw it in theaters. I happened to catch it late one night at the Toronto After Dark Film Festival in 2013. It was definitely the perfect movie to see with a crowd, and at the time it made me jump out of my skin. On this rewatch, however, it didn’t have quite as big or lasting an impact.

That said, it’s a banger as far as jump-scares are concerned.

After all, like Matt pointed out, what kid hasn’t had the nightmare of being grabbed by something through the slats in the stairs? Stephen King articulated the fear with perfect simplicity in It (the novel, not the movie): He did not like the cellar, and he did not like going down the cellar stairs, because he always imagined there was something down there in the dark.

Oh, Georgie boy. If you only knew.

The Banshee Effect had an appropriately strong effect on me when I saw it initially, largely due to the sound design. I respond very readily to ASMR stimuli, so movies like The Babadook, for example, have actual visceral effects on me because of their sound design. A lot of that plays a big role in how Banshee Chapter impacts me.

This is also why this scene preps me for terror but doesn’t really have much of an impact anymore beyond catching my breath for a moment. It doesn’t linger with me. It doesn’t grab hold like other films have in the past, or even other scares in Banshee Chapter.

I’m a jumpy person, which is odd considering how much I love horror movies. Put me in front of the right movie and I’m like a bunch of popcorn kernels bursting in a pot on the stove. (Weekly food reference quota = complete.) I quite literally leaped across the room while watching 47 Meters Down for last week’s entry. I don’t think I’ve yet to watch Crawl from a fully seated position.

So this made me jump. I held my breath waiting for the moment I knew was coming, and the tension was released like a tightly-coiled spring being let go, but it didn’t really scare me in any major way. Which is surprising, because it used to.