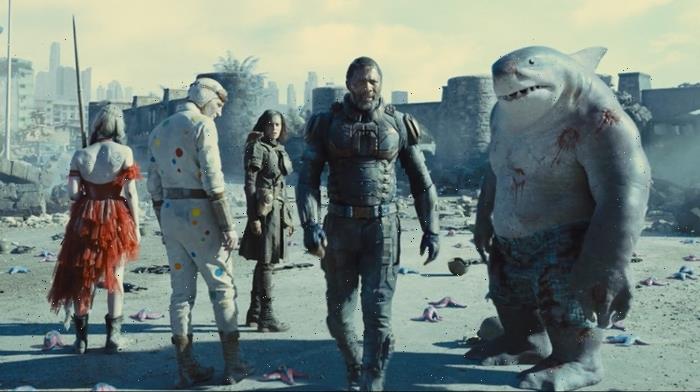 A Cause Worth Fighting For

Following orders from Amanda Waller (Viola Davis), a group of convicts from Belle Reve Prison are sent to the tropical island of Corto Maltese to destroy a powerful weapon. About half of the team doesn’t make it past the beach landing, and we’re left with Colonel Rick Flag (Joel Kinnaman), Bloodsport (Idris Elba), Harley Quinn (Margot Robbie), Peacemaker (John Cena), Ratcatcher 2 (Daniela Melchior), Polka-Dot Man (David Dastmalchian), and King Shark (Sylvester Stallone). When they finally get to Jotunheim, the Nazi-built secret base they were sent to destroy, things go even more haywire.

They discover, via a delightfully evil monologue from the villainous Thinker (Peter Capaldi), that the U.S. government was funding experiments on civilians with their “Project Starfish,” which is revealed to be the psychic alien Starro. Waller didn’t send them just to destroy the weapon — she sent them to destroy all evidence of America’s involvement. Flag doesn’t handle this too well. After all, he’s the only member of Task Force X/The Suicide Squad who’s there voluntarily and not to lighten a jail sentence.

“I joined the military to serve my country, not to be its puppet,” he declares before yanking a disc full of evidence out of the supercomputer. He plans on releasing it to the press, to show the world about the atrocities committed in the name of the United States. Unfortunately, Peacemaker has specific instructions from Waller to destroy the evidence, and he’s willing to kill Flag to follow his orders. He does, and goes after Ratcatcher 2 as well before Bloodsport can stop him.

Flag was the closest thing to a moral center the squad had, leaving it to Bloodsport to take up the reins of leadership. The living alien weapon, Starro, escapes, and Waller tells the squad to stand down and return home. Bloodsport decides to honor Flag’s sacrifice by ignoring her orders and taking on the giant monster. The remaining members of the team join him, even as Waller screams that she’ll detonate the explosive devices embedded in their skulls. That’s when her direct subordinates take over and hit her over the head with her own golf putter, before jumping on their communications to help assist the rogue squad in their fight against Starro. Sometimes the right cause can unite even the strangest of allies.

Facing Off Against a Freaking Kaiju

Each of the squad has their own personal reasons for going on what feels like a true suicide mission against Starro. Bloodsport thinks of his daughter, and wanting to make her proud. Ratcatcher 2 sees some of her dead father in Bloodsport, and promised to protect him. Harley was given a magical javelin by one of her dying comrades on the beach, and she believes it’s her destiny to use it. Polka-Dot Man seems thrilled just to be included for once, and King Shark wants to protect his friends, the first he’s ever had.

Over the course of their bloody adventure, these characters developed bonds with one another. Their unusual kinship, and their willingness to sacrifice themselves to save others, turns them into true heroes. Starro begins taking over the city, tiny starfish flying from its armpits and slapping down on the faces of thousands of unsuspecting victims. Once the starfish latches on, the person becomes a Starro-controlled zombie.

The squad are willing to do whatever it takes to take Starro down. Unfortunately, Polka-Dot Man gets squished shortly after wounding the creature’s leg and shouting “I’m a superhero! I’m a proper f***ing superhero!” Bloodsport’s weapons don’t seem to be making much of an impact. Even King Shark gets thrown around like a ragdoll, unable to get a good grip on the creature’s flinging limbs.

It’s up to Harley and Ratcatcher 2 to save the day, in one of the most beautiful and strange climaxes to hit cinemas in a long, long time.

A Tribute to the Misfits and Marginalized

Ratcatcher 2 summons all of the rats in the city, a writhing horde that follows her commands. She tells Starro that the city doesn’t belong to it, the squad, or the humans. It belongs to the rats, she says, as the swarm begins attacking the massive alien. Bloodsport, who has a phobia of rats due to childhood trauma, curls up beneath her protective arm as they crawl over him towards their destination.

Harley makes it to the top of a building and launches herself at the eye of Starro, which turns out to be liquid. She floats, dreamlike, inside of the eye, watching in wonder as the rats break through and start chomping on its monstrous brain. The rats represent all of those who have been discarded and forgotten by society. They represent the ones who fell through the cracks, those who just don’t fit into the neat boxes of “civilized” society. As Ratcatcher 2 sends her furry friends to destroy the alien menace, she remembers her father (Taika Waititi) telling her why he chose to communicate with rats.

“Rats are the lowliest and most despised of all creatures, my love. If they have purpose, so do we all,” he tells her.

If rats, who are thought of as vermin that should be eradicated, can be the heroes, then anyone can. It’s a beautiful statement, a tribute to misfits and marginalized people everywhere. This movie is an ode to the downtrodden, the weary, the folks who have been left behind. It’s an important lesson about how we can all change and grow, and how our connections to one another are the most powerful force in the world. You can’t judge a book by its cover, just like you can’t assume a rat is a pest, or a criminal is a bad person. Sometimes we’re just handling the cards we’ve been dealt as best we can.

The Suicide Squad ends with Ratcatcher 2’s best little buddy, Sebastian, climbing up on Bloodsport’s knee. Bloodsport cautiously reaches out and begins petting the tiny creature, overcoming his trauma and phobias to show kindness to a new friend. If anything, The Suicide Squad is an ode to the underdog… er… under-rat.

The Suicide Squad is now playing in theaters and HBO Max.

06/08/2021 TV & Movies Comments Off on 'The Suicide Squad' Ending Explained: This One's for the Little Guy
Lifestyle