While the delta variant continues to be a stumbling block for the overseas box office, it’s not entirely certain that’s the continuing case at the domestic box office as more people become vaccinated.

Despite comfort levels for moviegoing being down over the last three weeks per NRG, it’s not all doom-and-gloom with such parameters on par with mid-May, just prior to the successful theatrical windowed launch of A Quiet Place Part II ($57M 4-day). Analysts tell me that if the delta variant was indeed crimping the domestic box office, we wouldn’t have seen an overindexed domestic debut of Disney’s the Jungle Cruise this past weekend which beat its $25M projection with $35M; or the previous launch of Warner Bros.’ Space Jam: A New Legacy which outstripped its $20M forecast with a $31M stateside start. In addition, if the delta variant was such a monkey wrench to the box office, we would have seen Disney+ Premier PVOD monies on Jungle Cruise outperform its domestic box office results; Samba TV reporting that U.S. terrestrial households pulled in an estimated $23.3M last Friday through Sunday. Overseas is another scenario which we detail below.

Just keep all of this in mind as we watch the ticket sales for the third DC Harley Quinn movie, this one directed by Guardians of the Galaxy filmmaker James Gunn, The Suicide Squad from Warner Bros. The movie hits theaters and HBO Max day-and-date around the globe where the service is available. Total global opening we’re pegging is at $70M; $30M from 4,000 U.S./Canada theaters and $40M from abroad. Stateside, unlike previous Warner Bros./HBO Max movies, there will be Thursday previews starting at 7PM. It would not be shocking should Suicide Squad approach $40M domestic; the movie given Gunn’s zany comedic touch is roaring on Rotten Tomatoes at 96% Certified Fresh from 110 reviews, blowing away the critical reception of the first 2016 Suicide Squad movie which had 26% rotten and 2019 spinoff Birds of Prey which was 79% certified fresh. Like Birds of Prey, Gunn’s The Suicide Squad is rated R; the first David Ayer directed movie received a PG-13 rating. 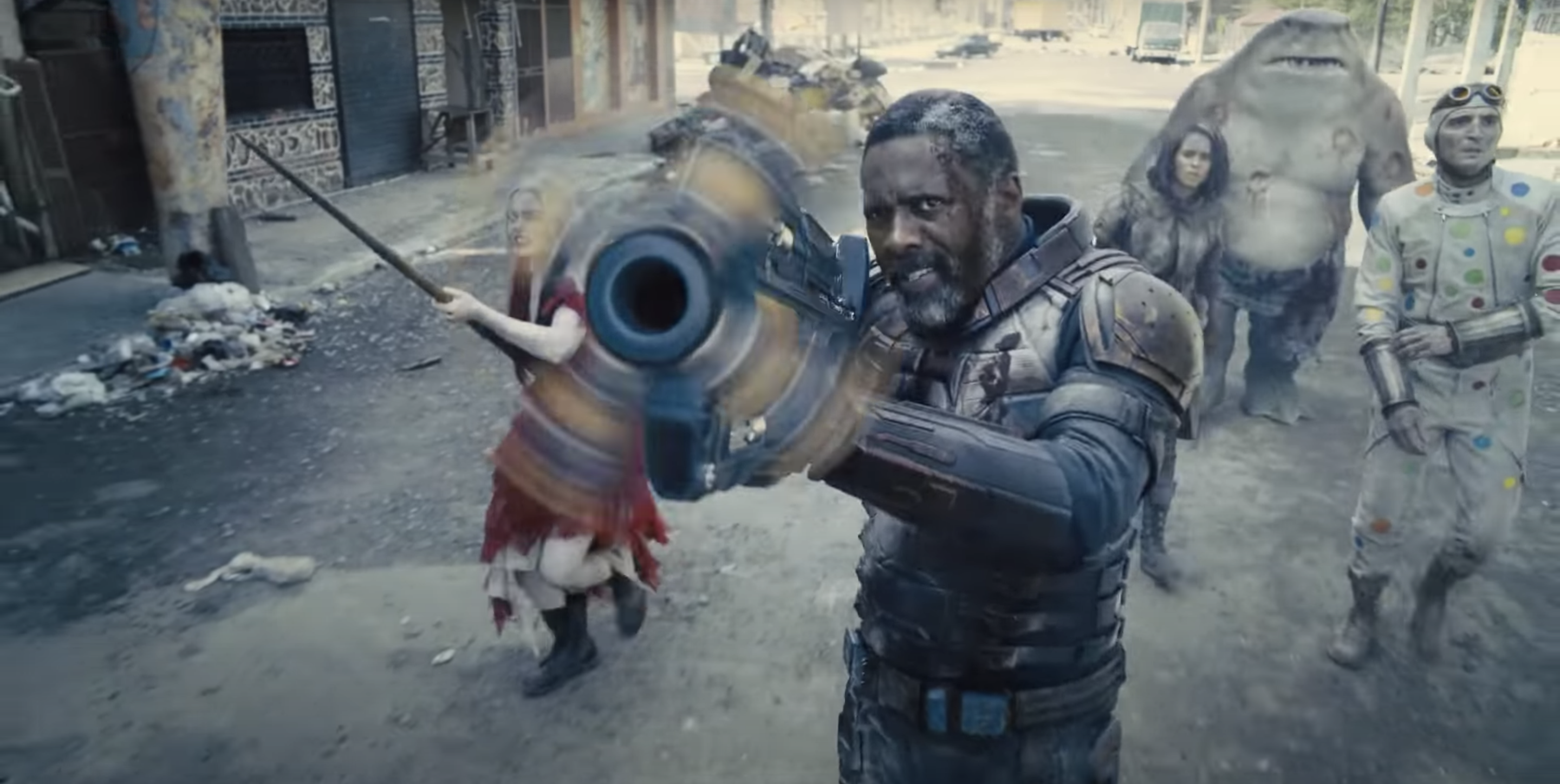 The first Suicide Squad in 2016, despite its critical backlash and lackluster B+ CinemaScore, still holds the biggest domestic opening for August with $133.7M. The movie legged out to 2.4x multiple at the domestic B.O. with $325.1M, for a grand global total of $746.8M. That’s very impressive given the fact that I’m constantly told that the first movie was poorly received (this coupled with Ayer’s further distancing himself from the studio’s cut on social media recently). Birds of Prey, directed by Sundance Film Festival wonder Cathy Yan, was less impressive at the box office, but in hindsight looks like a glamorous success by pandemic standards as it opened to $33M stateside before the exhibition lockdown in February 2020 and seeing an $84.1M domestic result and $201.9M global result.

Gunn’s The Suicide Squad got off to a confirmed $6.7M start in five international box office markets this past frame, including a $4.5M No. 1 UK debut that outdistanced fellow opener Jungle Cruise by 50%. Of the other majors where it launched last session, France gave TSS a $1.7M start, landing behind a new local title. This weekend, the sequel adds essentially all markets that are currently operating (64 in total) save Japan which goes August 13. The films in this DC series do not play in China.

Given the pandemic and the various restrictions in offshore markets which are constantly shifting, it would be incongruous to comp to the 2016 Suicide Squad which went on to final at $422M overseas (57% of the worldwide gross). Rather, 2020 spinoff Birds Of Prey lends itself as a somewhat better comp since it was released as Covid was taking flight and offshore markets were growing cautious. The opening on that movie, in like-for-like markets (including last weekend’s bows), was $36.6M at today’s rates.

Traditionally, the strongest DC markets are in Europe and Latin America. In 2016, Suicide Squad’s best plays were the UK, Brazil, Mexico, Australia and Russia. In 2020, BOP’s tops were the UK, Mexico, France, Australia and Russia. However, we are in a tricky environment. While the UK is doing well in the current landscape, Mexico has a number of states on increased alert, France is dealing with confusion over the requirement of a health pass (Italy is introducing its own health pass this Friday), and Australia is about 40% closed with Sydney still locked down. Also notably this coming frame, France is opening what is considered to be the most-anticipated local movie of the summer with Jean Dujardin-starrer OSS 117: From Africa With Love (this is why Warners went early there last week with The Suicide Squad).

Meanwhile, Jungle Cruise, which continues to pace like Dwayne Johnson’s pre-pandemic Rampage in its first week (the Disney pic’s Tuesday of $4.76M beat the latter video game feature adaptation’s first Tuesday of $3.4M), won’t look like that 2018 New Line movie in weekend 2, no thanks to its availability on Disney+ Premier and piracy, and the fact that the pic will lose its premium large format screens to Suicide Squad. As such expect at least a -60% drop on Jungle Cruise. The pic’s five day gross stands at an estimated $43.5M, dollars and cents higher than Rampage‘s $41.6M over the same period of time.