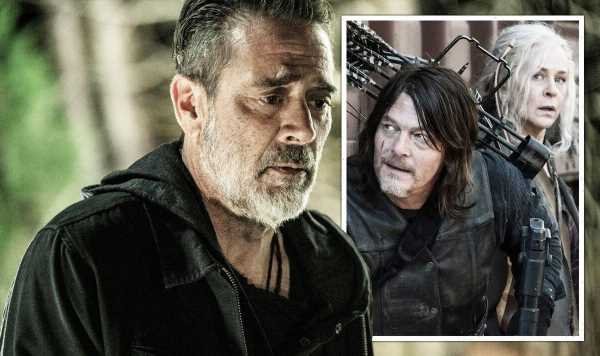 Chief content officer and former showrunner Scott M Gimple has been reminiscing about the life-changing experience of bringing Robert Kirkman’s bestselling comic book series The Walking Dead to screens for more than a decade on AMC. In his latest post on Twitter, the showrunner recalled a touching memory from his earliest days with the hit post-apocalyptic drama.

Fans of The Walking Dead have sent Scott some heartwarming messages of their own following his latest Twitter post.

In his latest nostalgic updates, the former showrunner recalled one of the first time’s he became aware of the series before he joined in season two.

“One more sentimental one: for me, it started on Lankershim Blvd, walking to work, seeing a poster for the show at a bus stop,” he wrote.

“I was so psyched to see the comic come to life and have something new to watch on Sundays.”

“And here we are, 12 years and change and a lifetime later.”

One of AMC’s most popular dramas began back in 2010 with Sheriff Rick Grimes (played by Andrew Lincoln) waking up from a coma to discover the world had been taken over by the undead.

The Walking Dead has since become one of the USA’s biggest shows, and millions are expected to tune in to this week’s series finale.

“Somehow, a question got asked: if you could work on any TV show, past or present, what would it be? I thought for a second and then I realized: THIS is the show.

“Sasha [Sonequa Martin-Green] said, ‘Little things do end, but it’s never the end of everything, because we don’t die.’

“I hope you love Sunday, I hope you’ve loved these 12 years and change. I did.”

Several fans took to the comments of Scott’s post to send their appreciation for his work on the series.

Chris Rafferty replied: “Such beautiful appreciation posts. You can tell you’ve been thinking this the entire time, not just at the end. Congratulations on an incredible run.”

@Xmasbaby304 said: “This show has meant so much to so many. How can it be ending?

“So many stories. So many characters. All important to make this show perfect.”

This week’s landmark episode will see the likes of Daryl Dixon (Norman Reedus) and Carol Peletier (Melissa McBride) make one last stand against the oppressive Commonwealth.

Thankfully, the iconic zombie franchise is far from over, though, as several spin-offs are already lined up to continue the legacies of some of the fans’ most beloved characters.

The Walking Dead season 10 concludes Sunday, November 20 on AMC in the USA and the following Monday on Disney+.