This Morning’s Eamonn Holmes and Ruth Langsford has impressionists Jon Culshaw and Jan Raven on the show today to perform for them.

The ITV This Morning pair had Jon and Jan do a number of impersonations, including the Queen, Simon Cowell and Ruth herself.

Things got seriously awkward as Eamonn and Ruth couldn’t guess who they were attempting to copy, and Ruth was not happy as they impersonated her, as Jan said she spoke with a toffee in her mouth.

But the worst moment was when the spinner landed on Simon Cowell but Jon did Donald Trump, and Eamonn asked: “Is that Melania Trump?”

Fans rushed to social media to comment on how unimpressed the pair were with the impressions, as one posted: “Watching This Morning … is it me or is Eamonn a little unimpressed with Jon Culshaw … could at least pretend Eamonn?” 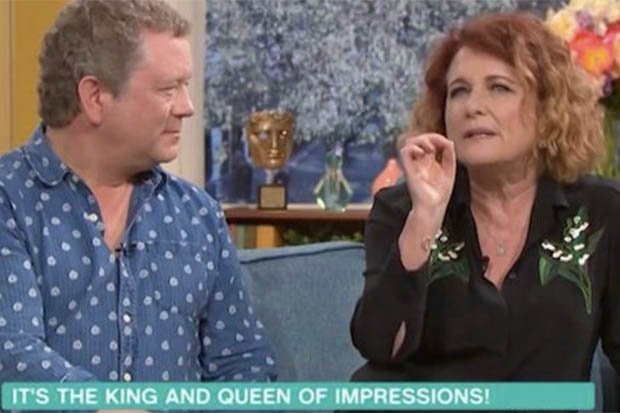 A third chipped in: “Ruth and Eammon seem well off today.”

A fourth wrote: “Ruth not keen on that impression haha.”

Other viewers were also unimpressed with the pair as they rushed to social media to share their confusion.

One posted: “These impressions are f***ing awful…”