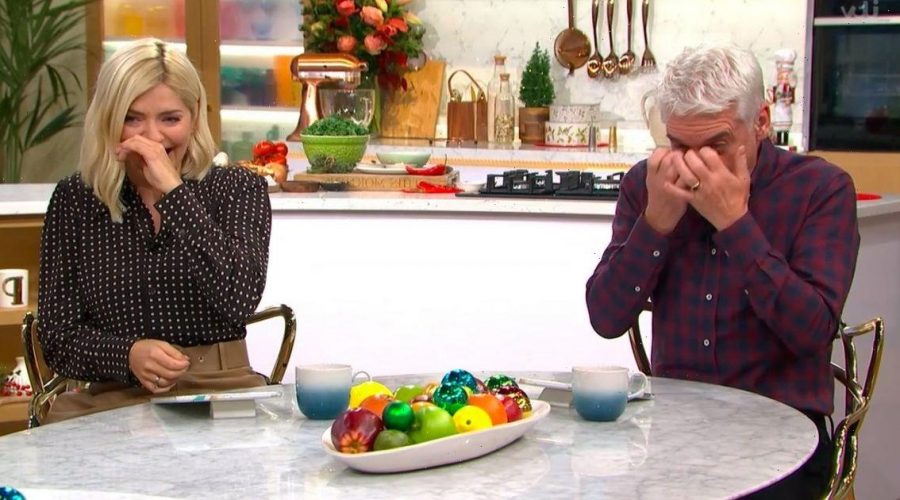 This Morning presenters Holly Willoughby and Phillip Schofield were in stitches during Monday’s show as guest Miriam Margolyes farted in the break.

The hilarious moment left the hosts, who were in hysterics when a caller swore twice during Spin to Win last week, in tears as they could barely control themselves when the show returned.

Suddenly going live once more, Phillip, 59, struggled to carry on with his cues but couldn’t contain his giggles at the shock of Miriam’s unbelievable openness.

Mum-of-three Holly, 40, tried to help pull her colleague together as she whacked him on the arm playfully, but it did no good.

Phillip shook his head and continued to snicker before finally explaining his reaction to viewers at home.

“I can’t. I can’t,” Phil apologised. “Professionally I should pull myself together.

“But Miriam’s just done the most enormous fart.”

Holly burst into another fit of giggles and the camera man suddenly zoomed in on the Harry Potter actress’s cheeky face.

Pretending to be unimpressed, Miriam scolded the presenter for revealing why they were all laughing as she said: “You outed me.”

“You outed it!” Phil fired back and Holly squealed in laughter once more.

Sharing the video to their Twitter page, This Morning teased fans: “You'll never believe why Miriam has Phillip and Holly in stitches.”

Fans instantly rushed to the comments to praise the hilarious moment, and many said it had “started off their Monday morning” right.

“Omg you two are hilarious,” one fan laughed.

Another viewer gushed: “I absolutely love everything about Miriam.”

While a third said: OMG #askmiriam is THE BEST agony aunt I’ve ever seen She needs a weekly segment on the show.”

One fan even suggested the trio do more work together, saying: “I think Phillip and Holly need to do a late night show! Then they can be as naughty as they want and let Miriam let rip in more than one way.”

For all your latest updates on This Morning, sign up to OK!'s daily newsletter.