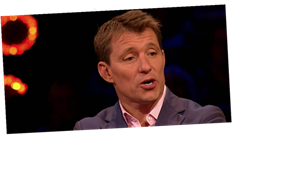 ITV aired a special episode of Tipping Point on Tuesday afternoon as part of a huge schedule shake-up.

Good Morning Britain star Ben Shephard usually hosts the popular competition from 4pm until 5pm every weekday, but things will be different for the rest of this week.

Starting from today (Tuesday March 16), episodes will began at 4.30pm and will finish at 5pm.

Instead of the usual episodes, ITV is airing Tipping Point's Best Ever Finals, which showcases some of the most dramatic finishes from over the years.

The TV star pointed out to Ben, 46, that he had spread his legs out to get a better balance when pressing the button.

Viewers at home couldn't believe their ear as Len, now 76, made the confession.

While other fans moaned that the quiz show had been replaced with a best bits programme.

One viewer ranted: "What's happened to Tipping Point? Are we now seeing the COVID lack of filming?"

A second person posted: "Best ever finals? Not today!"

While a third said: "I can't wait for the regular Tipping Point episode to return."

The latest edition of Tipping Point's Best Ever Finals also showed London based retail finance manager Christina win big money on the show despite getting off to a slow start.

The change of schedule is due to ITV's Cheltenham Festival. Tipping Point isn't the only show that's been affected as Loose Women won't be on television screens all this week.

Fans will be pleased to know that Tipping Point will return to its regular 4pm slot from Monday, March 22.

Friday's edition of the show saw Ben left stunned as he claimed a player 'made Tipping Point history' with her controversial decision.

Jacqui was one of four players taking part in the show as she competed against Brian, Mani and Abby in a bid to win mega money.

During her turn, she decided to pass a counter to her fellow player Brian, which left her missing out on a staggering £450.

Jacqui had managed to bag several counters, but sadly she didn't manage to push any coins over the machine's edge with them.

She then decided to pass her next counter to Brian, but this was a risky move as the machine had plenty of coins close to the edge.

Unfortunately for Jacqui, Brian put the coin in and knocked a staggering nine counters across the Tipping Point.

A stunned Ben remarked: "That is one of the most generous passes in Tipping Point history."

Tipping Point Best Ever Finals continues on ITV on Wednesday at 4.30pm