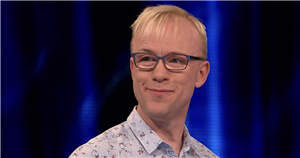 Tipping Point fans were left baffled on Friday, as one contestant messed up on an incredibly easy query – in which the answer really was in the question.

Contestant Stephen was facing host Ben Shephard in an attempt to secure some coveted counters to put into the Tipping Point machine.

And Ben quizzed him first on what month the British campaign 'Veganuary' takes place in, asking: "Launched in 2014, Veganuary takes place in which month each year?"

The answer, of course, is January – the 'anuary' of which appears in the campaign title.

However, after a lengthy pause, Stephen figured the answer could be 'October'.

Fans couldn't believe he'd slipped up on such a simple question, as they flocked to Twitter to share their incredulity.

One wrote: "TV on in the background and got distracted when contestant on Tipping Point was asked which month is Veganuary held? He seriously answered 'October'. Dead."

Another quipped: "I've just got to my hotel and switched the TV on to see some [man] say that Veganuary encourages people to go vegan during the month of October…??? I've missed my daily #TippingPoint fix."

And a third viewer penned: "How can one think that 'Veganuary' takes place in October?!", while someone else posted: "Veganuary is when? OCTOBER!! Throw them off the show!"

"Just turned on #TippingPoint to see Veganuary = October! FFS!" another laughed with a row of cry-laughing emojis.

Poor Stephen was knocked out before the final head-to-head, leaving Carole and Abi to face off for the chance to play in the final.

But it was Carole who made it through to the bitter end to compete for the jackpot counter, leaving fans devastated that they had to say goodbye to blonde bombshell Abi.

"F***'s sake, just turned on to see Abi go!" one moaned on social media, as another posted: "I'd like an Abi for Christmas!"

Abi, however, had made a whopping blunder of her own, as she reckoned ABBA might have had a hit with a song called 'Telling Me, Telling You'.

The correct answer was, of course, 'Knowing Me, Knowing You'.

"Nah, I can't just let that one go, Abi! Telling me, telling you!" one fan quipped with a laughing emoticon.

"Oh my Abi!" someone else cringed.