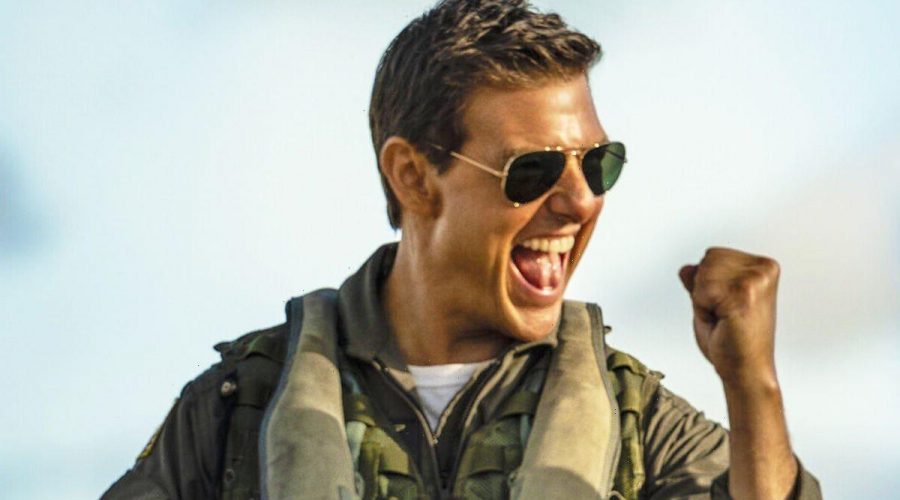 The original Top Gun was released in 1986 and introduced viewers to Tom Cruise’s need for speed. The film was a box office smash, earning more than $350 million in the process, and becoming a cult hit over the decades in the process.

Over 30 years later, Top Gun: Maverick is due to hit cinemas later this year, and while the film’s plot has been shrouded in mystery, the first few review reactions have now hit the Twitterverse. One fan noted how “nostalgic” the film is – but also how it is “emotional”.

Top Gun: Maverick was screened at the CinemaCon trade show that took place this week. A number of journalists and fans were privy to a secret screening, making it the first time the movie has been shown publicly.

Barry Hertz said the crowd were calling for the film to be played on repeat because it was so good.

He wrote on Twitter: “Crowd shouts to ‘show it again!’ after #TopGunMaverick credits end. I can’t say I’d object. See this on the BIGGEST damn screen with the BEST sound system that you can find. Good on Tom Cruise for continuing to be an insane person. #CinemaCon.” (sic)

Nikki Novak agreed while giving some praise to the newcomer to the series, Miles Teller.

She said: “Just saw #TopGunMaverick at #CinemaCon – goodness gracious. Might be the best movie in 10 years. Thrills & chills, tears & cheers. @TomCruise is unparalleled. It exceeds anything you could imagine. EXTRAORDINARILY tense. PERFECTION. @Miles_Teller crushes.”

Teller arrives in the series as Rooster, the son of Goose, who was played by Anthony Edwards in the original 1980s movie. Fans will recall Goose died while on a flight with Cruise’s character Maverick – so there is sure to be some emotional recompense there. And it sounds like this isn’t the only callback to the original film buried within Top Gun: Maverick, according to another fan review.

Another review called Cruise a “madman” for performing all of the flying stunts for real.

Shaurya Chawla wrote: “TOP GUN: MAVERICK is a lot of fun, loaded to the brim with some jaw-dropping flight sequences (Tom Cruise is really a madman for some of this), tons of nostalgic callbacks to the first and a few surprisingly emotional beats. See it on the biggest, loudest screen. #TopGunMaverick.” (sic)

Perhaps the most shocking part of the reviews is how people think it will be better than the original Top Gun.

Scott Menzel claims the film is going to stun fans of the first film.

He said: “Top Gun Maverick is going to completely blow away fans of the original and may even make some new ones along the way. Truthfully, even though the plot is very dependent on that of the original, I found the film to be better than the original in almost every way. #TopGunMaverick.”

The positive reviews for Top Gun: Maverick are encouraging, and are surely a relief for Cruise who worked hard to create a unique experience for both the viewers, and the actors. In fact, Cruise designed a “boot camp” for the actors to get comfortable with flying real jets.

This should come as no surprise to Cruise fans, who have seen the intense actor jump off of buildings, run up the Burj Khalifa, and hang off the side of a plane in real-time on the big screen.

29/04/2022 TV & Movies Comments Off on Top Gun Maverick reviews call it best movie in 10 years – Better than the original!
Lifestyle