Talk about tackling two different shades of retro trippy. Costume designer Jenny Eagan got to go wild with Emma Stone and Jonah Hill on the mind-bending “Maniac,” and then re-imagine the World War II insanity of Joseph Heller’s “Catch-22” with Christopher Abbott as Yossarian, Kyle Chandler as Cathcart, and executive producer and co-director George Clooney as Scheisskopf.

“‘Maniac’ was unexpected and something different to wrap your head around, and ‘Catch-22’ was another opportunity to learn something new,” said Eagan, who appeared Tuesday for a panel discussion at IndieWire’s inaugural Consider This FYC Brunch. “At first, ‘Maniac’ was [daunting]. You start out by looking big picture and then it gets frightening. You want it all done at the same time and because you’re a little unsure, your mind is tripping on, ‘Where do I begin?’ But, with ‘Maniac’ it had to start with defining Annie [Stone] and Owen [Hill] and how they functioned in this strange, dystopian world. And also [director] Cary Fukunaga had strong opinions visually, of course, and he pushed me into thinking a different way.” 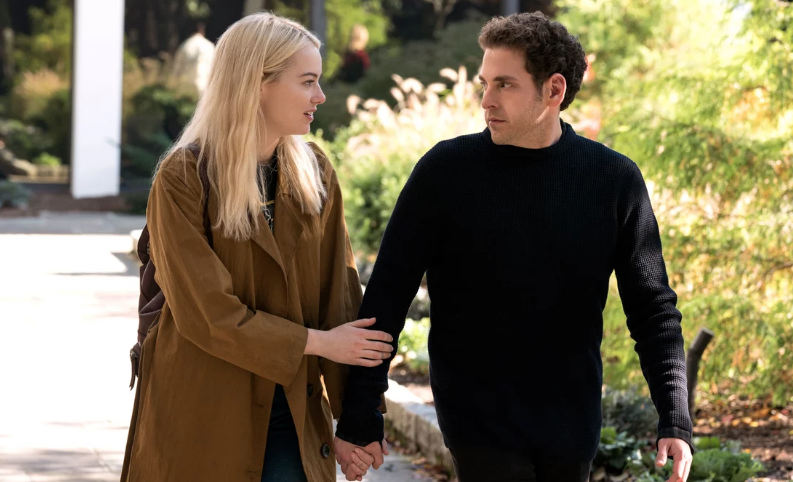 But then it clicked for the costume designer once she figured out the rules of the world where tech had stopped functioning as we know it, and the two protagonists – the non-conformist Annie and the conformist Owen – were liberated from their personality disorders, thanks to a pharmaceutical experiment that set their minds free. “Functionally, they both lived in this world, day to day, just surviving,” Eagan added.

“And, for me, Owen, based on his tiny apartment, was very concise and compact and didn’t need too many choices. He didn’t allow himself to broaden outside of his little box, so I did that with his clothes – very repeated, the same person every day. He wore multiple pairs of the same white tennis shoes and variations on the same suit with different colors. They were like a security blanket.” 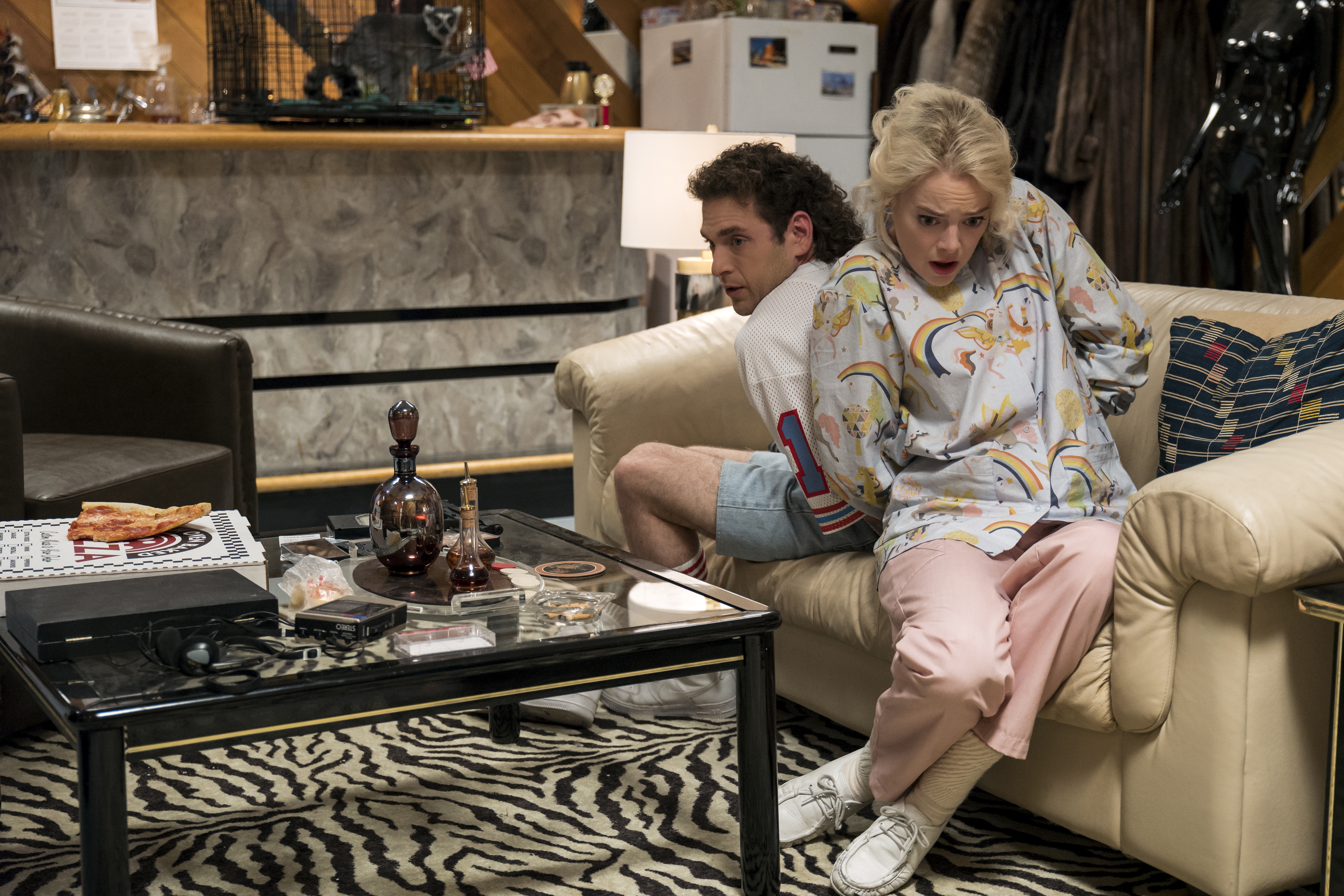 Then, during his dream states, Owen goes on exciting adventures in different time periods with Annie. His standouts include a comfy football jersey and shorts in the ’90s and a three-piece suit in the ’40s. “He gets to imagine himself as different people and break free,” Eagan said. “And Annie has her security blanket with her yellow trench coat, which makes her stand out in this muted color palette. And then she breaks free, as well, while always standing out.”

Annie wears a red power suit during a post-World War II action sequence, a stunning blue dress at a party in the ’40s, and a elf costume during the Middle Ages. “I just thought it was fun to see her in that red having that power and control,” Eagan said. “All of those guys that she was fighting wore dark tones and it was just the same person coming again and again. 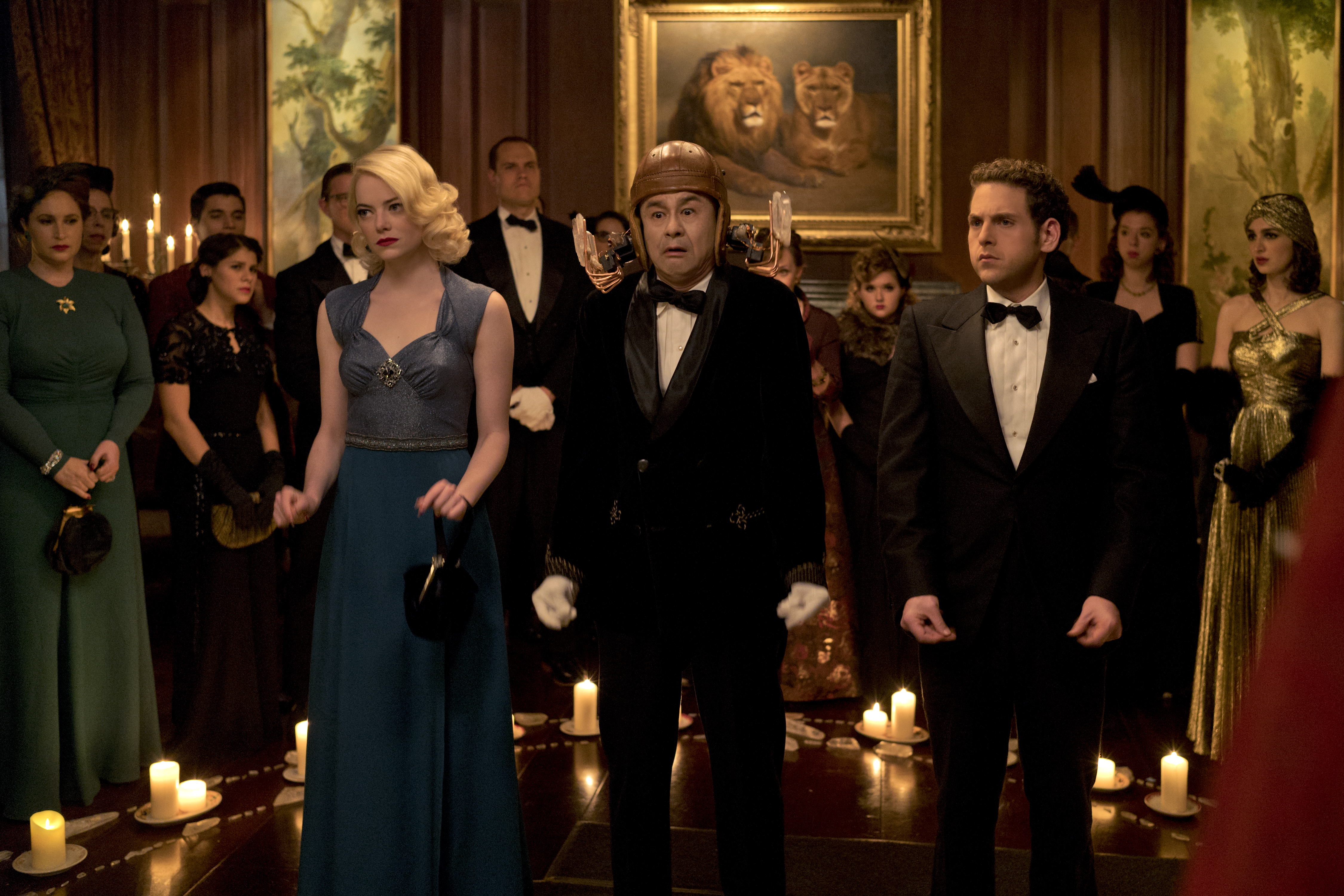 “For that femme fatale blue dress, I wanted it to be old Hollywood with a touch of glam. And, again, we had a strict color palette with the people at the party and I wanted her to stand out. Literally, the only blue is her in that room. I wanted it to be a bit softer, too, because we aren’t expecting what happens.”

However, the elf costume was a last-minute addition when showrunner Patrick Somerville and Fukunaga suddenly came out with a “What if?” brainstorm. “But there were no rules and no expectations of being something else, so that was just mixing great fabrics and making things that were textured that we could age down,” Eagan said. 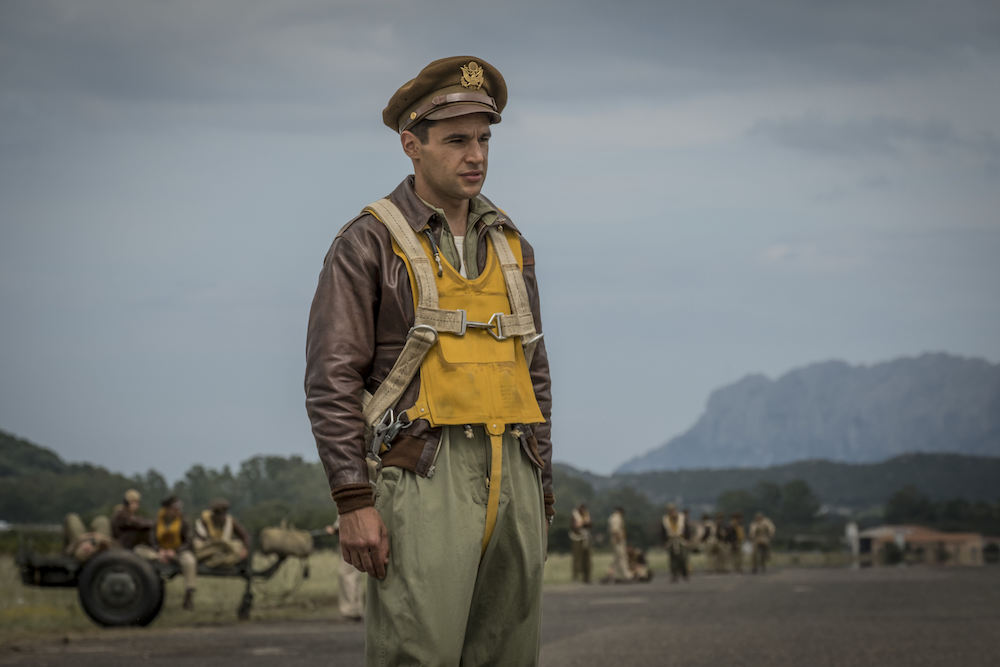 The “Maniac” experience wasn’t necessarily accurate to the time period, but it gave Eagan the freedom to be creative. On the other hand, working on “Catch-22” required a much more authentic costume design. The miniseries remake was about a very different kind of mental breakdown, in which Yossarian’s U.S. Army Air Force bombardier tries to play Artful Dodger — but the absurd military bureaucracy keeps him tied to active duty.

“The uniforms were very specific,” Eagan said. “It was late in the war in ’45. They were in the Mediterranean, which was very hot and lent itself to the khakis and the flight jackets when they flew.” The costume designer had to outfit 300 actors, but, fortunately, she was able to find actual uniforms. The problem was locating them. Instead of in Europe, they were stored in boxes in a U.S. warehouse. 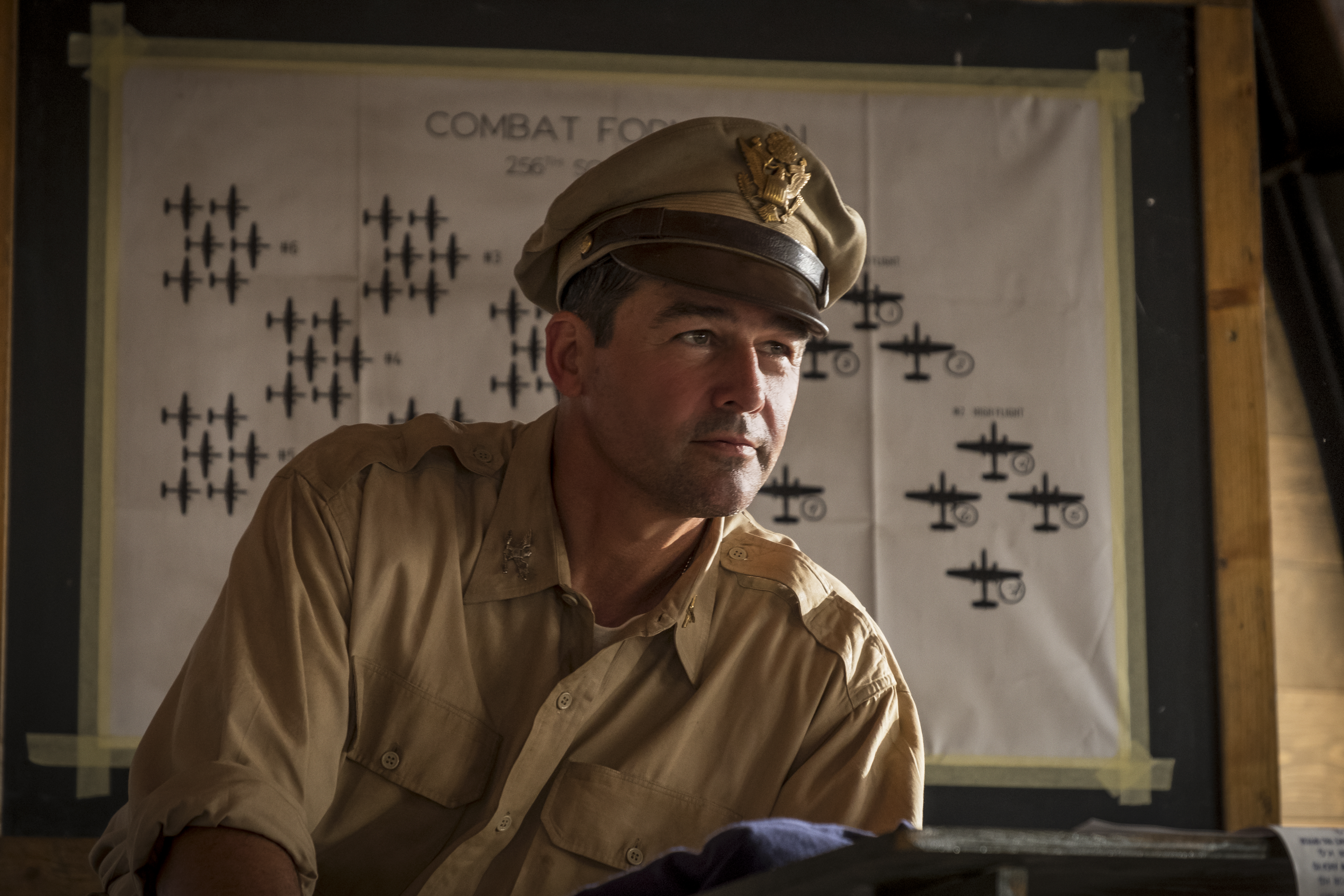 But in fitting the three principals – Abbott’s Yossarian, Chandler’s Cathcart, and Clooney’s Scheisskopf – Eagan relied on rank and personality. For Yossarian, she looked at author Heller as a model and discovered an eerie physical resemblance. “I found his photos, even down to the little dangle on his leather jacket to ward off evil,” she said. “I wanted the clothes to fit well and not too sloppy. [Yossarian] was very uptight when he went there and starts to lose it emotionally, but he starts to relax a little bit at the end.”

For the brown-nosing Cathcart, Chandler came up the idea of the gunslinger look along with a sloppy, oversized uniform. “He wasn’t a tie guy until Scheisskopf comes in as a general and he pulls it together a bit more by the rules,” Eagan said. “Scheisskopf was definitely by the rules and power hungry…everything was very specific to impress and very strict and stringent. 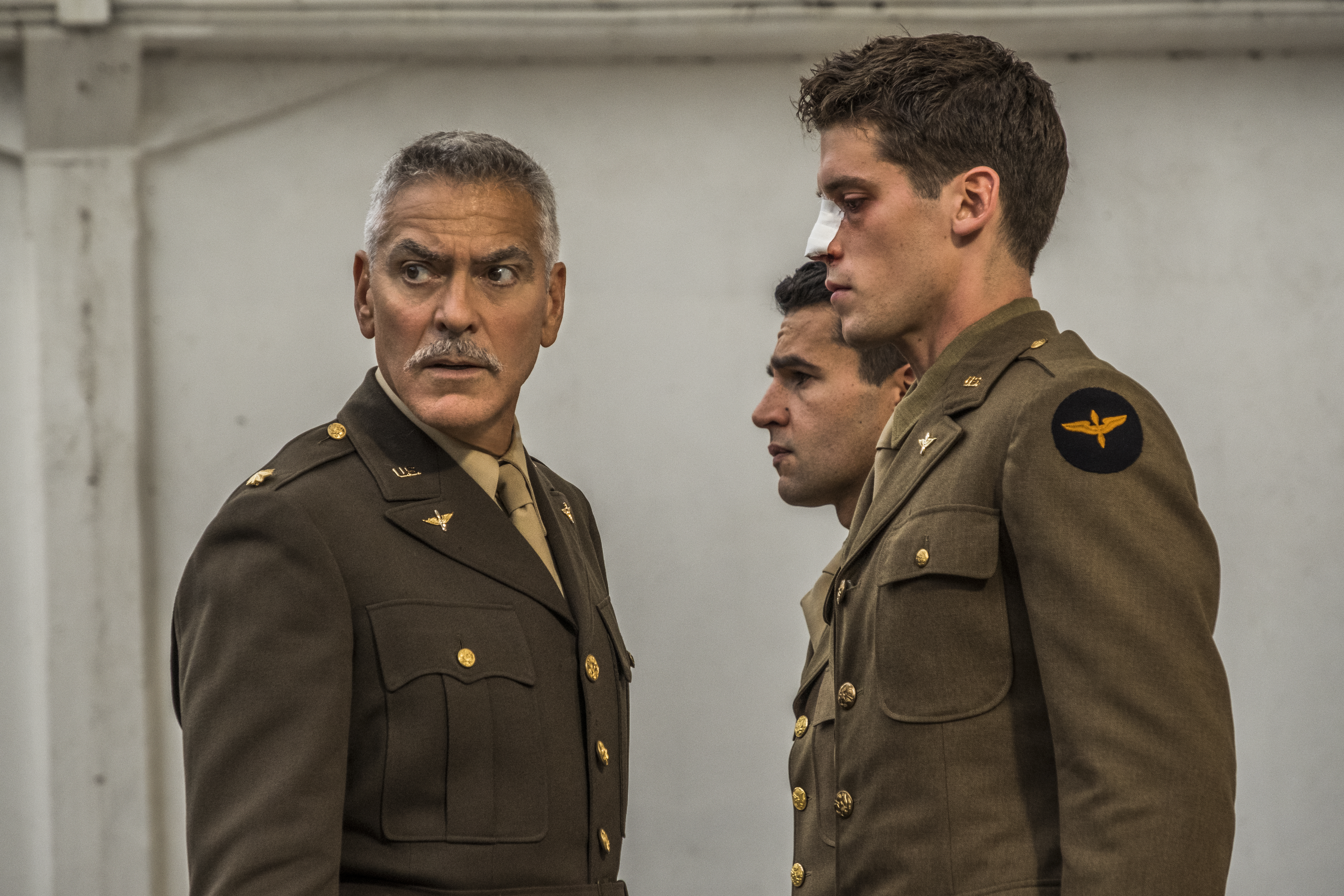 “With George, you really don’t know who he’s going to be until he sets foot on that set, which is a really good thing. I wanted him to be, as a general, maybe looking up to Eisenhower and the way he dressed, who was very much tailored and always looking dapper.”