Compromising images of a teenage girl appear on her friends' phones and computers without her permission. The girl is barraged with text messages, and shunned socially. Identifying the person responsible, let alone bringing them to account, seems almost impossible.

It's a nightmare scenario, for the girl, her parents and lots of others too. And this all-too-real scenario is at the centre of two television dramas, each thoughtful and considered but handling the subject in vastly different ways. 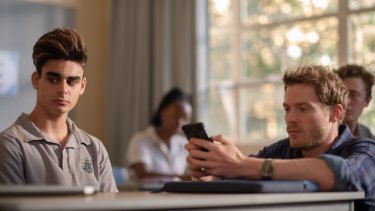 Yazeed Daher as Nassim and Sam Reid as his teacher, Ray, in The Hunting.Credit:SBS

In The Hunting (SBS, Thursday 8.30pm), Zoe (Luca Sardelis) finds herself at the centre of a sexting scandal when a classmate to whom she's attracted, and with whom she has had cybersex, uploads a frame from their exchange, which he has secretly recorded, to a pornographic site. The boy, Andy (Alex Cusack), claims it wasn't him, and his parents – Richard Roxburgh as Nick, Asher Keddie as Simone – have his back.

At first that's because they believe him, but when Nick learns the truth it's because he wants to protect him; letting his son wind up on the sex offenders register would surely amount to negligent parenting. For Simone, though, the matter throws up all sorts of questions – about what sort of son she's raising, what sort of marriage she's living, and what sort of messages about male-female relations she's sending to her younger daughter.

Parallel to this is a second sexting case, at a neighbouring school. This time the girl, Dip (Kavitha Anandasivam), has taken and sent a nude image to Nassim (Yazeed Daher), a classmate on the brink of becoming her boyfriend. But everything goes to hell when he shares it with his best friend – who just happens to be Andy.

Teachers are swept up in the mess too. Ray (Sam Reid) tries to play protector, but steps into territory he really shouldn't – like telling the girls to keep themselves nice, and giving Dip his mobile number in case she needs to talk – neither of which bodes well for his fledgling affair with deputy Eliza (Jessica De Gouw). Boundaries, people.

In short, it's a mess. But it's a credit to the makers of this excellent four-parter that it doesn't try to impose a simple solution on it all. Selfies, nude or otherwise, are an intrinsic part of the process of self-discovery and expression, they argue. It's not compulsory, of course, but nor should taking or sharing such images spell the end of a kid's prospects in life. Taking or sharing them without consent, however – well, that's a whole other matter.

And that's precisely the matter at the heart of Share (Fox Showcase, Monday at 7.30pm), which opens with high-school student Mandy (Rhianne Barreto) passed out on the lawn outside her own home.

She has no idea how she got there, though it undoubtedly has something to do with another night of underage drinking and partying with her school friends. But when her phone starts pinging wildly – "did you see it? OMG, you have to see it" – she knows something's up. 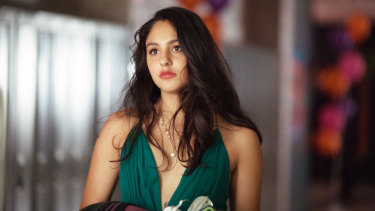 That something is a video of her, passed out, her pants being removed by a boy she thought was her friend, maybe more than that. What was he doing? Why was he doing it? What happened next?

Share unfolds as a slightly opaque detective story; just like Mandy's memories of the night, everything remains just out of reach. When finally it comes into focus, it doesn't represent an answer so much as another question: is it better to seek justice via a system that's often more brutal to the victim than the perpetrator, or to move on?

Neither of these makes for an easy watch, but for teens and their parents they ought perhaps to be compulsory viewing.

A word of advice though: maybe watch in separate rooms. Some things are just not meant to be shared.