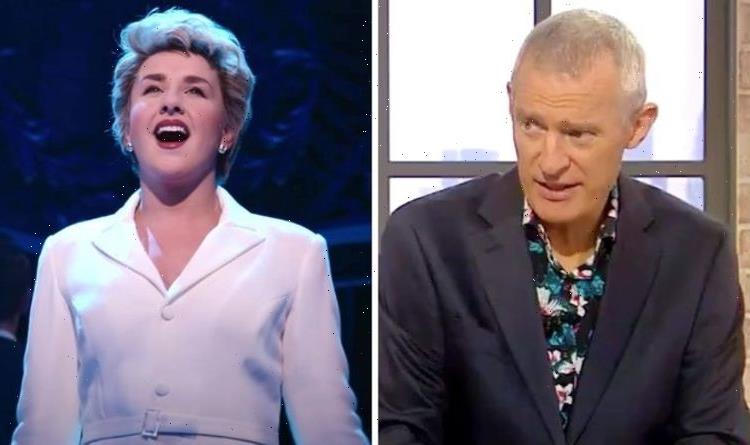 Diana the musical has finally been made available on Netflix after causing a stir on Broadway before the pandemic in 2019. The production has been the subject of controversy thanks to some unintentionally hilarious and misguided lyrics, and Jeremy Vine has weighed in on Monday’s programme on Channel 5 alongside guests AJ West and Dawn Neesom.

Jeremy Vine clashed with his guests over the latest dramatisation of the life of the late Princess Diana, Diana the musical.

The divisive production originally debuted in February 2019 on Broadway and is now available for international viewers on streaming service Netflix.

Jeremy explained the musical had been universally panned, with critics calling it an “absurdly over-the-top production”.

Reporter and producer Andy also gave his view after watching the musical on Netflix himself.

“I have seen the stage show, and it’s hilarious,” he admitted.

“Very talented people in it but it is utterly woeful.”

Journalist Dawn Neesom initially assumed the production was intended as a parody of a royal drama.

She exclaimed: “This isn’t a spoof, is it? They are serious.”

“I just assumed it was like a mickey-take but it’s not, they are serious.”

Jeremy was enthusiastic to see the disaster unfold for himself, but co-presenter Storm Huntley was less keen.

She retorted: “If it was a comedy, it’s acceptable, but the problem is it’s not. It was written in complete earnest.”

While his interest in the musical had been piqued, Jeremy was unsure if the influx of Diana-inspired media had been justified.

He said: “I do feel sad seeing these pictures. It is a family tragedy in the end.”

The guests then debated over whether the latest portrayals of Diana, including Emma Corrin’s Emmy-nominated performance in The Crown, showed her in the best light.

Dawn argued: “She’s portrayed to be some permanent victim, some weak, pathetic woman and she really wasn’t like that. She would be offended by that.”

However, Storm hit back, claiming The Crown’s fourth season showcased a number of different sides of the late royal.

“I don’t know if I agree with Dawn on that,” she retorted.

“She’s portrayed as a character with lots of different aspects of her personality, for sure, and one of them is definitely a victim.

“But the other one is a punchy individual who doesn’t take any nonsense. And not behaving like the poor, mistreated wife.”

Dawn insisted moments of The Crown season four consistently angled Diana as the victim, though admitted she hadn’t yet seen the full series.

Jeremy Vine airs weekdays at 9:15am on Channel 5.