Vikings has seen a lot of heroic deaths over the years, but it saved its most heroic for Bjorn Ironside. Season 6B of the historical drama premiered on Amazon Prime Video on Wednesday, with its first episode bidding farewell to the character played by Alexander Ludwig.

Aside from season 1, when Bjorn was a child, Ludwig had portrayed Bjorn throughout his life. He showcased the character’s sometimes complicated relationships with his parents, Ragnar (Travis Fimmel) and Lagertha (Katheryn Winnick), as well as his most fierce battles and most passionate romances.

Ahead of 6B, Vikings creator Michael Hirst said that Bjorn’s arc and journey to become king was perhaps what the show was all about. So, when it came time for him to die after that battle with Ivar the Boneless (Alex Høgh Andersen) and the Rus vikings, they let him go out in style.

Bjorn was presumed dead after his face-off with Ivar, but much to the surprise of the Rus, he lived to fight another day, putting on his armor, mounting a horse and rallying the viking troops to defend Kattegat from its enemy. His seemingly inhuman feat cemented him as a god in the eyes of many — and earned him the shrine built above the kingdom he called home. 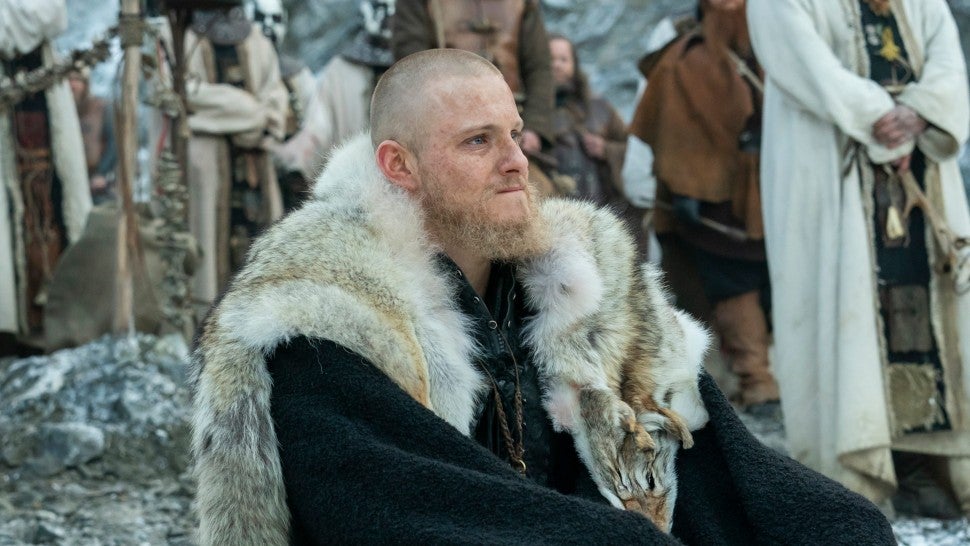 “Bjorn, in some ways, has made rather a mess of certain aspects of his life. He wasn’t a great ruler, he was too vain and complacent when he wanted to be king of Norway, and his treatment of women, by and large, was poor,” Hirst tells ET, noting that there was a story of “redemption” in Bjorn’s death.

“If he died just on those notes, then he might’ve been eminently forgettable, but in fact, he does something quite extraordinary at the end of his life,” he says. “He saves his country, and so he redeemed his life, I think, and puts himself in the pantheon of the great heroes of the vikings, Ragnar and Lagertha, and he joins them.”

As Ludwig notes, Bjorn’s death may seem premature to some fans, given his buildup as protagonist and the less than 10 episodes left of the series. However, that was one of the things that appealed to him.

In an interview with ET, Ludwig shares his reaction to Bjorn’s fate, reflects on his years playing the character and reveals what he took from set to remember him by.

ET: You got quite the heroic ending — did you always know that this was how Bjorn’s story was going to end?

Alexander Ludwig: Yeah, Michael was so amazing about that. He’s such a collaborator, and when it came down to our characters and their arcs, he’d really bring us into the process, which was so generous of him. He sat me down and we had a big talk about Bjorn’s demise, and he referenced El Cid, which is not only one of my favorite movies — it’s really funny because one of my best friends since I was a kid purely just by chance is actually Charlton Heston’s grandson, Jack Heston, and Charlton obviously was the star of El Cid. So I just thought it was poetic justice getting to do a little nod to that. It’s obviously not the same, but it definitely is reminiscent of that event, and he just wanted to do the character justice and I did too.

I always thought it was really important that Bjorn be injured by somebody like Ivar, because nobody would have expected it. I feel like it’s very predictable for Bjorn to have this really heroic rise and go out the way that we know he kind of did in history and I kind of loved that — you don’t really see this coming. Nobody’s really safe on this show, and it was nice that once you feel like Bjorn had become the protagonist, that his ending comes sooner than perhaps expected in the last season. 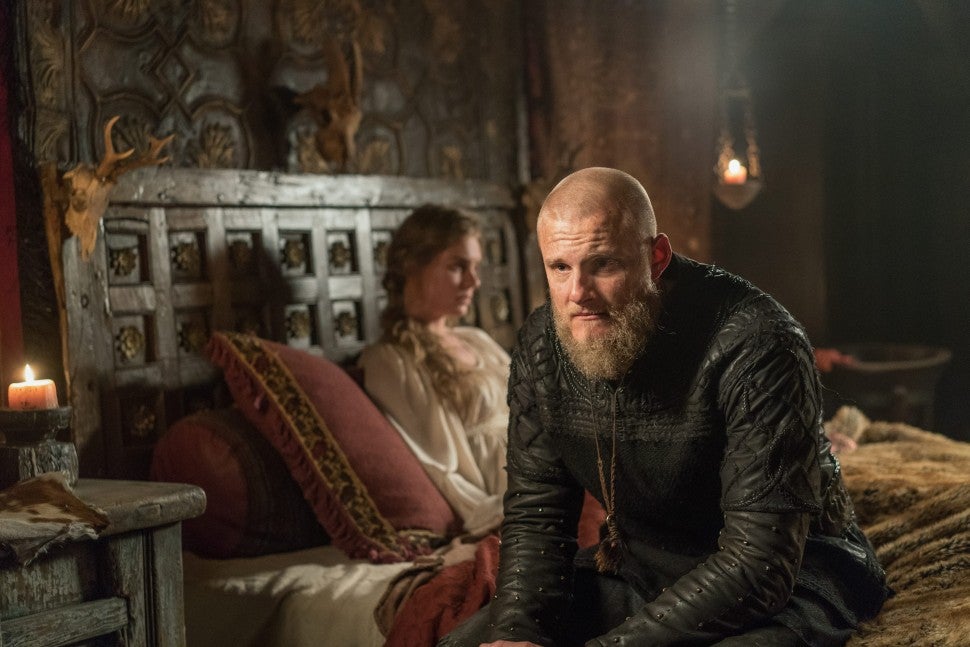 And it may have been one of the most legendary deaths for a character on this show — or on TV in general. Did it feel that way to you, filming it?

I wouldn’t say that I felt I was doing something historic — I don’t think I would ever say that about myself. But I would say that I certainly thought that we did the character justice and we did the fans justice by it. For all of Bjorn’s faults, it was really nice to see that in that one moment, he finally became the man that his father thought he could be, and then he always thought he could be. So in that sense, I definitely felt like we did it justice and I definitely feel like it’s a great conclusion to his story.

But it was a bittersweet moment, because a lot of the crew on that show has stayed [for years]. We’re all such a family, and I’m sure you’ve heard this before, but I wasn’t just saying bye to the character. I was saying goodbye to this incredible group of people who stuck through when they went to hell and back together. I mean, braiding the elements together on a show like this is no small feat, especially for the crew. I will miss this show tremendously, but I will also miss the family that we created.

Was it an emotional last day for you? How did you handle that last day on set?

It was, and I wouldn’t say that I was bawling my eyes out. I think I had reached a point on the show… and again, I want to say I’m so unbelievably grateful for the show. It is the best decision I’ve ever made. And I think that forever it will always be the best decision I ever made to do the show as an actor. I learned so much on the show. But I will say that we reached a point for the character where I believe that I have shown and we have done all we could have done with that character, and any more would have been overkill. So yes, it was really sad, but it felt right. It just felt like, ‘OK, this is the time to go.’ I had talked to Michael and Steve Stark at MGM about this extensively, and that we all agreed that this was the time. And it was really important to them that it didn’t happen at the end of the last season and that it happened the beginning of the next one, so we could have him carry over. And I agree with that.

So yes, I was sad, but I was also kind of at peace. This has been such an amazing experience, it’s also been so exhausting, and I’m really excited to move on to new things, but I’m really, really going to miss the show. There will never be an experience like the one I had on Vikings for me, I think ever again. So bittersweet is just the best word to put it. It was just filled with emotions, but I was also excited to get home to my friends with family. I’d been gone for like, six years, and we’re shooting 11 months out of the year in Ireland. So it can be lonely too. So, I was excited to be at least in North America for a little bit.

It’s so unusual on TV to be able to play a character through so many different stages of their life. Is there a moment or a storyline throughout Bjorn’s arc that really sticks out to you?

100%. There’s actually a few. When I first signed onto the show, Michael had always told me and promised me that Bjorn would eventually take over and that this was going to be a rollercoaster ride. And at the beginning it seemed like a bit of a pipe dream. You never know how a show like this is going to do, all I had to go off of with the fact that I’m surrounded by tremendous actors, fabulous writing, and a show that I know I’m going to be proud of. And anything else is a bonus. But when we got closer to what I had always known was Bjorn’s trajectory, I got more and more excited as the show continued.

So, there were moments that stick out for me of getting to work with Travis and Katheryn, that was amazing. I love them both and they’re both fabulous actors. And my friend Gustaf Skarsgård, one of my best friends as well. Those moments of Bjorn getting to finally learn from his elders was amazing. But for me, we shot in Canada, in Northern Canada, when Bjorn went away to fight the bear and become his own man — that was the first moment of Bjorn getting to step out of the shadow of his father and getting to be his own man.

And I loved all the Paris stuff, but another one that sticks out to me was when Ivar’s taken over the kingdom and Bjorn’s trying to get it back. Right before Bjorn is crowned king and takes Kattegat back, that speech to me was really important, and I was so grateful Michael gave me the opportunity to do that.

Another one that comes up is when he’s on the law rock and he arrests Floki for murdering Athelstan, that’s a big moment for him. And then finally just all of 6A, dealing with his mother’s death and struggling with the huge, insurmountable responsibility of being a king and trying to follow in his father’s footsteps. That, as an actor, is just the greatest gift. The kind of depths that I was able go to on the show and the kind of emotions I was able to explore, it’s so rare that an actor ever gets this in his entire career. And the fact that I got to do this over the course of six years is just a dream come true. 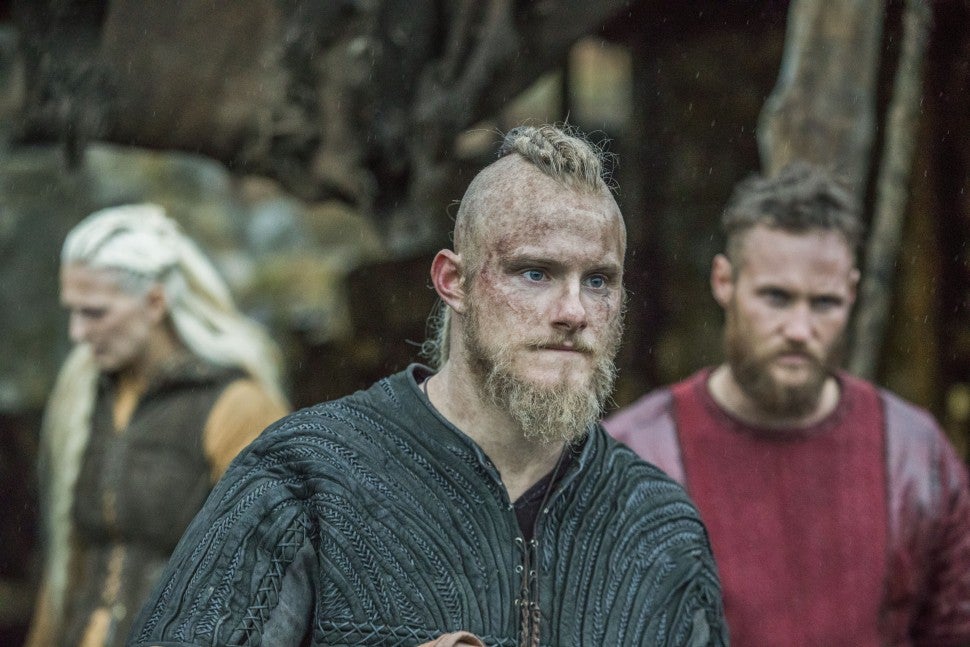 Several of your co-stars have spoken about the things they’ve taken home to remember their character by. What did you take with you?

Yeah, it’s actually a tradition on Vikings — anybody who dies on the show gets a shield signed by the whole crew and cast, which I love, I think it’s so cool that we did that. So, I got that shield. And Michael also gifted me with the producers, the Sword of Kings. It said, ‘Bjorn Ironside’ in Nordic engraved in the sword. So I’ve got that, and that was such an incredible gift.

And then the one thing actually I stole was, we have all these incredible antlers all over set. And I had to decorate an apartment and I love that rustic feel, I’m a country boy at heart. And I went to one of the props guys and I was like, ‘Dude, I got to take this home with me.’ And he was like, ‘No, you are not.’ And I just took it off the wall and I was like, ‘I’m taking this home with me,’ and I started walking off set. I’m like, ‘Guys, I really, really want to take these home with me. We’ve got like, 500 of them.’ And they were like, ‘OK, we’re going to build you a box and send them home for you.’ So they actually sent me home these beautiful antlers and I got those as well.