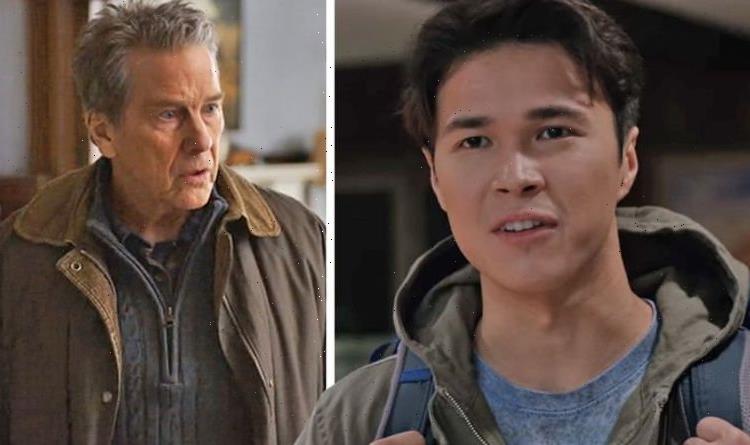 Season three of Virgin River ended with several loose ends – least of all, one concerning Vernon ‘Doc’ Mullins’ (played by Tim Matheson) supposed grandson arriving in town. Fans will remember Doc was at the hospital by Hope McCrea’s (Anette O’Toole) bedside following a car accident. But what if the man claiming to be Doc’s grandson is actually his son?

In episode 10 of the third series, the owner of the local B&B Jo Ellen (Gwynyth Walsh) asked the newcomer: “Good evening, how can I help you?”

“I’d like a room,” the teenager replied and she added: “Okay, I’ll need to see some identification.”

He argued he was 19-years-old but Jo reiterated: “Still need proper ID.”

Having handed over his licence, Jo noticed: “Oh you’re from Seattle? I have a friend who used to live there – I hear it’s a beautiful city.

“What brings you to town, if you don’t mind me asking?” And the man said: “I’m looking for my grandfather?”

“I know almost everyone in town, what’s his name?” The B&B owner remarked and the teenager revealed: “Doctor Vernon Mullens.”

Virgin River fans know Doc had an affair 20 years ago – therefore, it is possible the teenager could be his son instead.

It took Netflix viewers a while to find out Doc and Hope – the town mayor – were in fact married.

And the reason for this was because they were, in fact, separated because of Doc’s infidelity 20 years ago with Charmaine Roberts’ mother.

Doc tried several times to apologise to Hope for the affair – despite the two-decade period since it happened – but she was reluctant to accept him and his apologies.

Eventually, Hope asked him if he could sign the divorce papers in order for her to move on with her life and after some convincing, new papers were drawn up.

Arguments then ensued over who would pay for the papers and Doc decided he would, scheduling a meeting with the divorce lawyer too.

But, fans of the hit Netflix drama saw Hope become hesitant about the divorce and she didn’t show up to the meeting.

Following numerous discussions about the divorce papers, the two eventually decided to stay married and rekindled their relationship in secret.

In a bid to keep their rendezvous on the down low, Hope convinced Doc to date Muriel (Teryl Rothery) but after seeing her a few times under false pretence, Doc came clean.

In a bid to win over Hope once and for all, Doc headed to the city to get her engagement ring recast.

The two then agreed to renew their vows, opting for a large ceremony in front of the entire town – of which fans are yet to see.

But with Hope’s life hanging in the balance, the last thing Doc needs is a long-lost son turning up.

And does Charmaine know anything about this teenager?

Virgin River seasons one to three are available to watch on Netflix now.

11/08/2021 TV & Movies Comments Off on Virgin River season 4: Doc’s grandson to be his son from affair with Charmaine’s mother?
Lifestyle