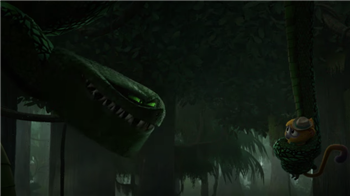 In Netflix’s new animated musical, a kinkajou goes on an exciting — and occasionally very dangerous — journey. This musical adventure takes the titular Vivo from Cuba to Miami, and for all its vibrant, colorful fun, it’s not without a few threatening obstacles.

You might expect Vivo’s journey to be worry-free, especially since he’s voiced by the ever likable and extremely talented Lin Manuel Miranda. Vivo himself is a small, fluffy, adorable animal, made even cuter by his love of music. And since it’s an animated musical, he always has the option of singing his way out of trouble! But in this clip, we learn that Vivo’s love of music isn’t appreciated by everyone and might turn out to be more trouble than he anticipated.

Check out this exclusive clip from Vivo.

Noisy the Singing Rat (AKA Vivo the Musical Kinkajou) might have to try his hand at silence when it comes to the scary swamp snake, Lutador (Michael Rooker). Apparently, not everyone’s a fan of music — or sound in general. Lutador has the entire swamp under his control, with every animal operating in terrified silence. So this might be one of those special situations where singing won’t help.

Escaping Lutador is just one of many complicated tasks on Vivo’s to-do list. His adventure is fueled by a very important goal — helping his owner Andrés (Juan de Marcos Gonzalez). The two share in their love of music and happily spend their days singing in a lively Havana square. And even though Vivo’s singing sounds like mindless chatter to human ears, Andrés knows they share this passion.

Vivo kickstarts his adventure in an effort to help Andrés, who wants to get a message to his long-lost love — a now-famous Marta Sandoval (Gloria Estefan). Even though he’s traveling for Andrés, Vivo’s going on an emotional journey of his own.

Vivo has found his life, he’s in a great place with Andres, and this is a noble mission movie. He has got his heart in the right place, and this is an offering, a gift…. He’s a kinkajou. He shouldn’t be doing this. And he wasn’t trying to get there to become a star. That wasn’t it. It was, “This guy saved my life. I’m doing this for him.” We used to have a lot more about it [in the film], but even Dancarino says to him, “What are you going to do now?” and he’s like, “I don’t know. Go back?” He had no plan. It wasn’t like there was an alternative.

With each step forward to help his friend, Vivo encounters more trouble than he expected and gets closer to confronting an important decision: what will he do once the message is delivered?

Vivo is streaming now on Netflix.