We get it, there’s no shortage of big-screen King Arthur adaptations, and the whole men-with-swords genre feels so well-worn that it’s hard to get excited by the notion of yet another brand-new Arthurian adaptation. But Netflix’s Cursed, which debuts today, is a lot more than that.

Starring Katherine Langford (Hannah Baker from 13 Reasons Why), the show is a complete reimagining of the King Arthur legend that spotlights her character, Nimue, also known as the Lady of the Lake. A rebellious young woman, Nimue fights to save her people with a little help from a roguish mercenary named Arthur (Devon Terrell) and a sword named Excalibur. In other words, this may be the feminist take on the legend you’ve been waiting for.

The Lady of the Lake is a familiar figure from the legend of King Arthur, but Cursed makes several key changes to create a compelling protagonist rather than a side character. Below, a quick primer on Nimue’s role in the legend versus Cursed.

There have been many different depictions of the Lady of the Lake.

Since there are different versions of the legend of King Arthur dating back as far as the 13th century, it’s no surprise that there are just as many variations on the character of the Lady of the Lake. She’s generally depicted as a mysterious and often unnamed enchantress who lives beneath a lake and is probably best known for bestowing Excalibur on King Arthur. In some versions, she’s beheaded shortly after this by Arthur’s rival, Sir Balin. When she is given a name, it’s usually either Nimue or Vivian (sometimes spelled Vivien or Vivienne).

The Lady of the Lake is typically depicted as a benevolent sorceress, who sometimes has a significant role to play in the lives of male heroes. In addition to giving Arthur his sword, in some stories she steps in to raise Sir Lancelot after the death of his father. But in other variations on the myth, she’s more villainous and at one point, traps Merlin, who couldn’t overcome her enchantment, inside either a cave or a tree in order to keep him for herself. So it’s fair to say she’s … a morally ambiguous character on the page.

The Nimue of Cursed has been reimagined as an empowered young woman.

Cursed creators Frank Miller and Tom Wheeler took an entirely different approach to their prequel, which takes place before Arthur becomes king, and finds Nimue being hunted along with the rest of her kind, who are known as fairies or Fae. Their persecutors are the Red Paladins, a violent sect who have no tolerance for people or belief systems that don’t resemble their own. So, yes, this is in part a story about bigotry and the divisive nature of fear.

Though Cursed remains a period drama, Langford’s Nimue is a much more contemporary heroine than any previous incarnation and has drawn comparisons to Harry Potter (because she’s a reluctant Chosen One) and to Stephen King’s Carrie (because she has superpowers that she sees as a curse and a burden). “To have Nimue be this strong and capable character was really what I wanted to achieve,” Langford told Glamour UK. “I want young girls to see that not only they can be strong and not only can they fight, but they can do it in a way that honors them, honors their bodies and also honors their gender.” 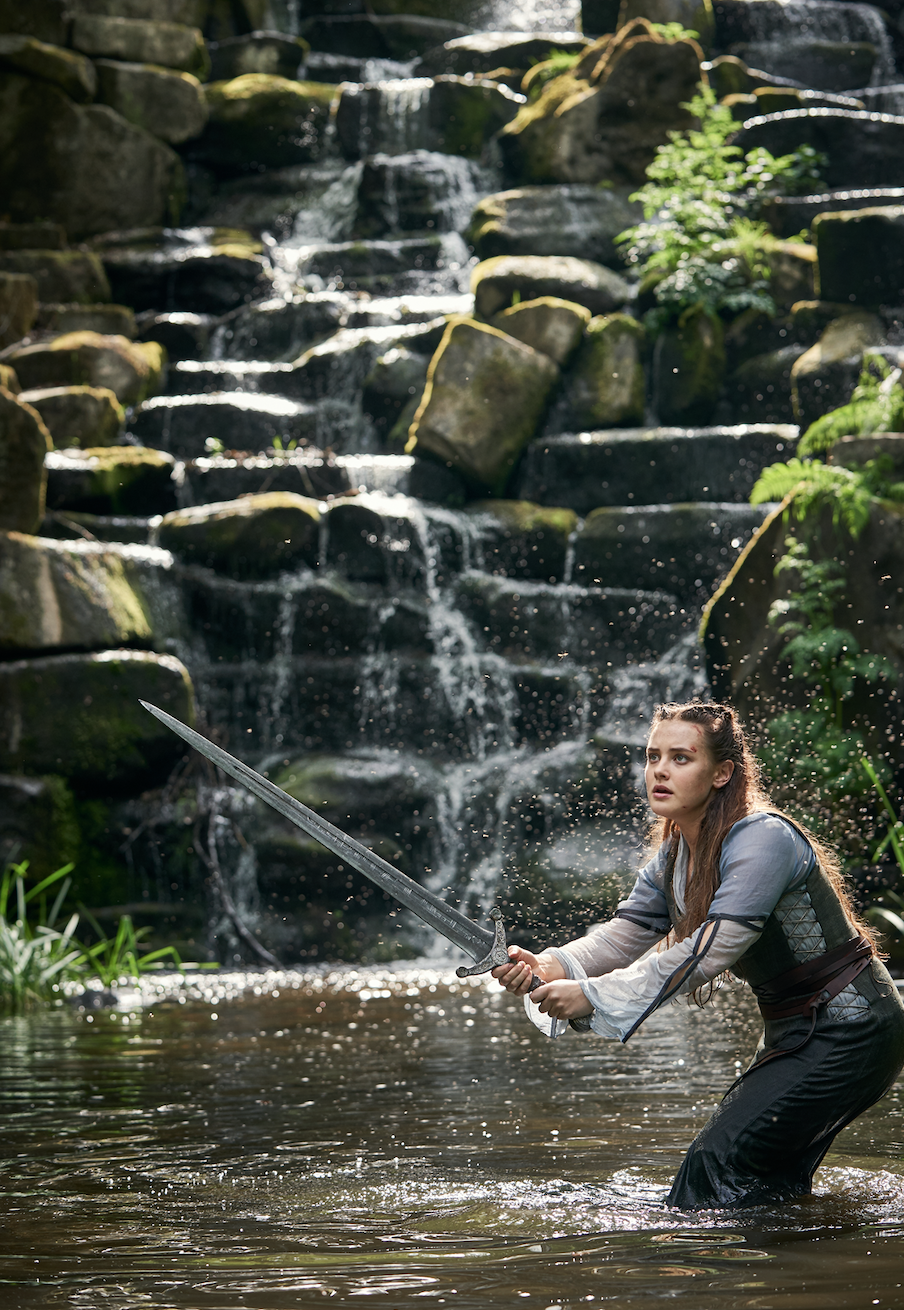 Langford’s Nimue wields the sword of Excalibur herself.

Another major difference from previous incarnations of the Lady of the Lake is just how much physical training was required from Langford. Far from chilling in a lake waiting for male heroes to bring her into the narrative, Nimue is out there horseback riding, sword fighting, and being a general badass in her own right. To that end, the Nimue we meet in Cursed doesn’t just guard Excalibur until a worthwhile man comes along to take it off her hands. Instead, she herself wields the sword, which according to ancient legend can be used by only “the one true king.” But as Nimue asks in the trailer for Cursed, “What if the sword chooses a queen?” Truly, it’s way beyond time to find out the answer to that question!

The show’s creators were similarly determined to make Cursed an empowering story. “When we started talking about this story, my daughter was 10 or 11 years old and she didn’t have characters to really lock onto in this mythology,” Wheeler told the The New York Times. “Yet the themes—seizing the sword, taking control of your own destiny, responsibility at a young age—made this about building out a story for her that she could connect to. That idea of being the hero of your story is for all of us. It’s great to have a woman with this sort of power.”

Cursed is now streaming on Netflix.

17/07/2020 TV & Movies Comments Off on Who Is Nimue, Katherine Langford’s Cursed Heroine?
Lifestyle