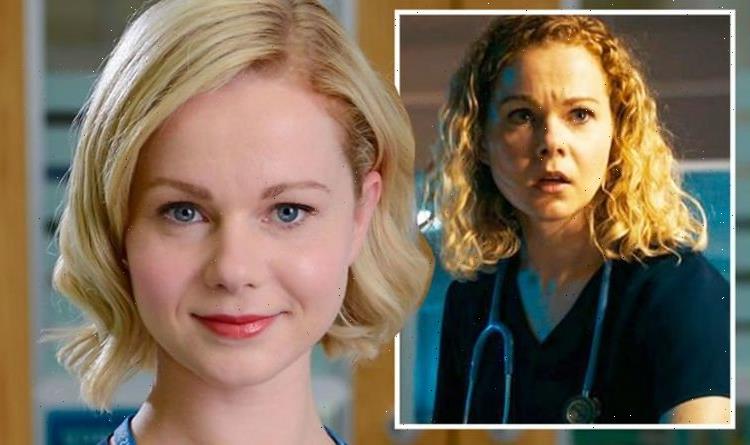 Amy has played the role of Chloe for the past two and a half years, being introduced to Holby City viewers as the daughter of Ange Godard (played by Dawn Steele). In Tuesday’s episode of the BBC medical drama, the beloved character was at the centre of the drama as she tried to operate on her mother to deliver her twin babies despite a bomb having gone off in the hospital. Although the character was not killed off and fans upset on Twitter, why has the actress decided to leave the role?

As the bomb had gone off at the start of the episode, the action picked up in the aftermath of the disaster, with several lives in peril.

With the likes of Henrick Hanssen (Guy Henry) trapped under rubble, Chloe, Ange and Josh Hudson (Trieve Blackwood Cambridge) were stuck in an operating theatre.

This is because Ange had gone into labour with the twins but she needed surgery to ensure the children were delivered safely.

An incision had been made by the time of the explosion so with no harm done to them, Chloe and Josh proceeded with the birth.

By the end of the action-packed instalment, the character was reunited with her mother and it was at this moment she revealed she was leaving.

Chloe told Ange, Josh and her brother, Dom Copeland (David Ames), of her plans, stating she had been offered a role in Switzerland.

It was a registrar role but there was potential she could become a consultant and although her family were shocked, they urged her to follow her dreams.

The character told her mother she no longer needed her like she did before, however, Ange had one more request of her eldest daughter.

She wanted Chloe to name her and Josh’s daughter’s name and so the character bestowed the name of Isabelle on the baby.

This was the last scene Amy or her character Chloe featured in before they made their departure from the programme.

Chloe had some really great storylines

Why did Amy Lennox leave Holby City as Chloe Godard?

It was announced prior to the episode airing the actress who plays Chloe, Amy, was going to be leaving the show.

With regards to why she has officially left, this has not been confirmed but it is likely the actress wants to pursue other acting opportunities.

The door has been left open for Amy, although, she will have to go on to feature in Holby City’s sister show Casualty instead.

This is because the Tuesday night medical drama is going off-air next year, with all the current characters having their stories tied up.

For this reason, this is why Amy could have left as bosses look forward to ending the show in the coming months.

At the time of her introduction to the show, Amy was “excited” to be taking on the role of Chloe, who was harbouring some secrets.

The actress said: “I’m thrilled to be joining Holby as Chloe Godard and working with such an amazing cast and crew over at BBC Elstree.

“Chloe has some really great storylines coming up that I can’t wait to share with you all. So excited,” she added.

Chloe’s storylines have included her relationship with her sinister boyfriend, Evan Crowhurst (Jack Ryder), who raped her.

He was eventually killed by Cameron Dunn (Nic Jackman), who in turn developed an unhealthy obsession with Chloe.

She has also discovered Dom is her brother after it was revealed Ange had given him up for adoption years before.

Chloe has also been deemed a miracle doctor when she managed to resuscitate a baby who was born asystolic, meaning there was no heartbeat.

Executive Producer of Holby City and Casualty at the time of Amy’s casting said: “It’s was exciting to welcome Amy to the Holby family and see this leading West End star burst onto the scene in her first big TV role.

“Her performance as the strong yet deeply vulnerable Chloe was terrific as she brought to life this fascinating, multi-layered character.”

Holby City airs Tuesdays at 7:50pm on BBC One.

14/09/2021 TV & Movies Comments Off on Why did Amy Lennox leave Holby City as Chloe Godard?
Lifestyle