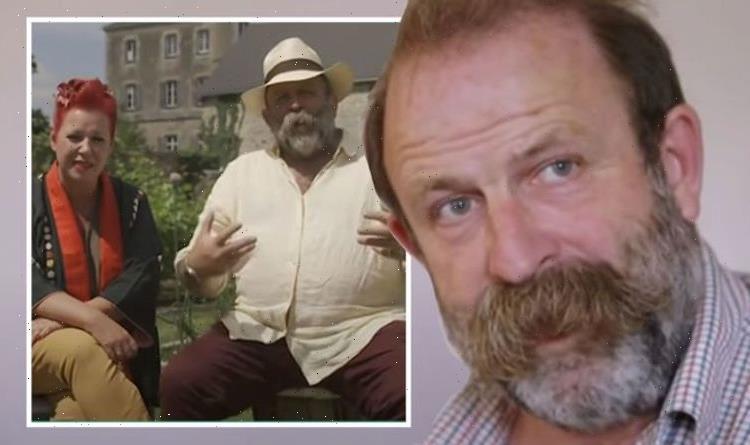 Escape to the Chateau: Angel on 'excitement' of finding 'gems'

Escape to the Chateau follows the lives of Dick Strawbridge and his wife Angel Adoree as they continue to renovate their home in the French countryside. The building is called the Chateau de la Motte-Husson and was developed in the 19th-century in the Martigne-sur-Mayenne region of France. However, the Channel 4 show and its multiple spin-offs do not air in France, despite broadcasting since 2015. Why is this?

Why does Escape to the Chateau not air in France?

Although the episodes are available to watch in the UK, they also stream in other countries across the world, including America.

In fact, 40 territories air the episodes as fans internationally learn what they can do to bring a fresh lease of life into their homes.

Unfortunately, France is not one of these regions and it is the couple who made this demand to the broadcasting agencies.

According to Dick and Angel, they don’t want to be seen as a “celebrity couple” in the country they now call home.

Therefore, they refuse to let French networks air their shows as they want to keep their life as private as possible.

Dick explained to The Telegraph: “We are very normal and that’s the secret; people can see themselves in us.”

The father of four added the locals of Martigne-sur-Mayenne are aware of what the couple are doing and know they are famous in other countries.

However, they don’t see the celebrity appeal and do not consider the home renovators to be famous in France, which is just how Angel and her husband want it to be.

According to Dick, the pair don’t see themselves as famous either as he said: “We are definitely not a celebrity couple in our world. My mum would clip my ear if I acted like a b****y idiot.”

We are very normal

Where else in the world does Escape to the Chateau air?

As well as Britain and America, there are some other 40 countries in which Dick and Angel are part of the television schedule.

These include Australia, South Africa, Sweden, Latvia, Angola, the USA, Canada, and China and many, many more.

Although, instead of watching the instalments on television, some countries offer the episodes on streaming platforms.

For example, in Australia, the first six seasons of the show can be accessed on 9Now and New Zealand air the episodes on Top TV.

Will there be more episodes in other countries?

It was confirmed earlier this year there were more episodes and series in the pipeline in the not-so-distant future.

This will include an eight-episode run of the main show and the third edition of Escape to the Chateau: Make Do and Mend.

The couple’s production company, Chateau TV, and Two Rivers Media have managed to secure a two-year deal with Channel 4 to keep their franchise alive.

The success of the show has seen 2.5 viewers in the UK tuning in weekly, with the seventh season seeing 3.1 million watching on average.

Dick and Angel said: “We are excited to be at the start of what we hope will be a long and successful relationship with Two Rivers, one of the most exciting indies in the UK sector at the moment.”

Head of Popular Factual at Two Rivers, Lizi Wootton, added there is a “huge opportunity” for the couple’s brand to grow.

The home renovators continued: “We first started working with Lizi when Escape to the Chateau was little more than an idea.

“So it’s terrific to be collaborating again on these series and growing our creative relationship,” they said in a statement.

Escape to the Chateau is available to stream on All 4.

02/09/2021 TV & Movies Comments Off on Why does Escape to the Chateau not air in France?
Lifestyle