There are TV shows you don’t realize you need in your life until they arrive. Shows that defy expectations and deliver insights in a fashion that could never have been anticipated by simply reading a synopsis. These series often struggle to find their audience, with individuals discovering them only after the fact. And while it’s wonderful that art can touch people long after its completion, delayed appreciation — particularly when it comes to television — can be a dreamkiller.

If you’ve had your ear to the ground of social media, you might have heard a persistent rumble about Showtime’s new series “Yellowjackets.” Perhaps, you reckon, it’s a show that isn’t your style, but that fans will not stop yammering about. In reality, it’s a beautiful and brutal series, a rumination on survival and sacrifice and what we owe each other on a baseline level. It’s also about a girls championship soccer team that crash lands in the Canadian wilds and finds themselves forced to survive for 19 [nineteen!] months until eventually rescued. It’s about the things they had to do to survive. And what they chose to do to survive.

But “Yellowjackets,” created by Ashley Lyle and Bart Nickerson, is so much more than a simple survival series. It’s also about the burden of domesticated life, the freedom of being feral, the shame of survival, and the friends we make along the way. Far from being a straightforward tale, the series weaves together four separate timelines into a narrative Gordian knot.

“Yellowjackets” has four protagonists, played by (at least) eight different actresses, that the audience sees existing in two primary timelines. One follows the events of the 1996 plane crash and the aftermath, centered primarily on Shauna (Sophie Nélisse), Taissa (Jasmin Savoy Brown), Natalie (Sophie Thatcher), and Misty (Sammi Hanratty) in addition to their teammates. The other is focused on the present day lives of Shauna (Melanie Lynskey), Taissa (Tawny Cypress), Natalie (Juliette Lewis), and Misty (Christina Ricci), more than 20 years after their rescue. It is a triumph of casting and while the Artios Awards didn’t find space for the series this year, there’s always next year — assuming “Yellowjackets” gets renewed.

As the show unfolds, it also delves into events that pre-date the crash timeline — events from the characters childhoods, for example — as well as a timeline that fumbles around the dark and savage period that exists sometime between the plane crash and the eventual rescue, which involves masks and furs, a girl running barefoot through the snow before meeting a grisly fate, and a fireside meal of mystery meat that comes with a hefty portion of cannibal-speculation from people wanting to know what, exactly, happened during those 19 months. 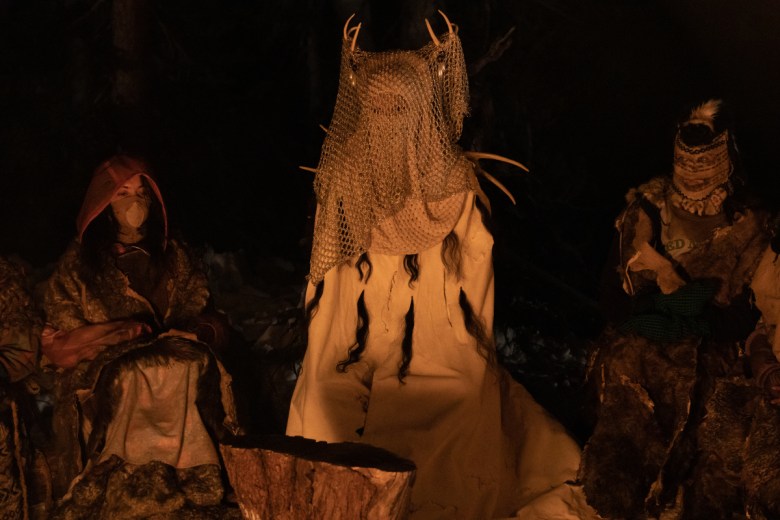 We’ve seen and loved mystery-box shows before. We were wrapped up in the foreboding island in “Lost” and who killed Laura Palmer on “Twin Peaks” and sucked into the conspiracies unfolding in “Mr. Robot.” But “Yellowjackets” is a bit different. “Yellowjackets” in dedicated to its mysteries, but it also has plenty to say about the ways that patterns repeat themselves throughout our lives and what we deem important and when.

It also delves into the incredibly complex dynamics at play in the relationships of teen girls. This isn’t an attitude always reflected in entertainment, where it’s easier to paint one-dimensional characters who are always bad or always good, always loyal or always duplicitous, when in reality, the heart of a typical teen girl contains multitudes and survival is always the name of the game, whether in the wilds or the high school hallways or the soccer field.

Further, while nothing has been explicitly stated yet, there’s an electric undercurrent of queer passions burbling just below the surface of many relationships in “Yellowjackets.” We know that adult Taissa has a wife and a child, but all of that is as yet unclear in the past, perhaps in part because it’s 1996 and the world was a very different place. Yet so many of the friendships and hateships carry a low-key sexual tension, maybe because young women are often socialized without shades of grey when it comes to their peers. You love them, you hate them, but what do you do when you lust them? 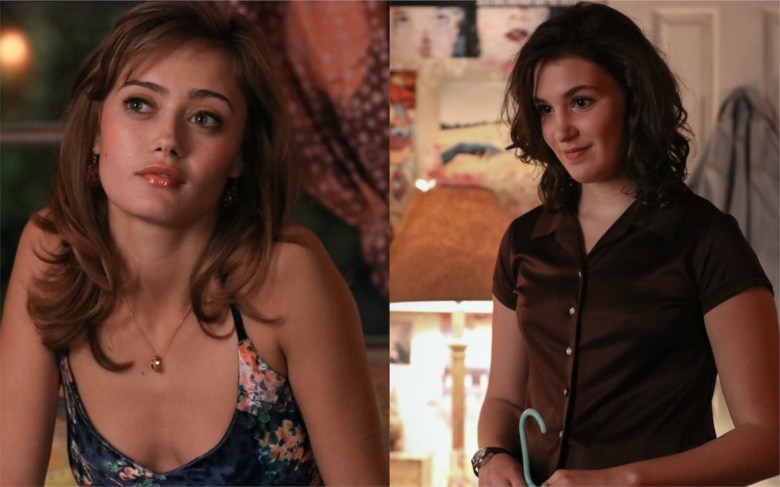 Ella Purnell and Sophie Nélisse as Jackie and Shauna in “Yellowjackets”

But maybe the most impressive accomplishment of “Yellowjackets” is the fact that it inverts societal expectations with regards to what emotional upheaval is valid and taken seriously. In the pilot, we see teen Shauna with her best friend Jackie (Ella Purnell). The pair have the type of relationship in which Jackie is clearly the sun and Shauna, the moon reflecting the light back to her. It’s not malicious, it just is. Which is why it feels surprising when it’s revealed that Shauna and Jackie’s boyfriend, Jeff (Jack Depew), have been secretly (and repeatedly) hooking up. It’s complicated, to say the least, as at times Shauna’s affection for Jackie reads like attraction, and if she can’t be with her best friend, why not be with her best friend’s boyfriend?

The development is surprising and from then on, there is a queasy anxiety that surrounds Shauna and Jackie’s interactions, the audience knowing what Jackie — at least for now — does not. [Editor’s Note: The following portion of the article contains spoilers for “Yellowjackets” Episode 4.]

Then the other shoe drops. As you might have noticed earlier, Jackie is not one of the show’s protagonists, though she does play a significant role in the plane crash timeline. It’s yet to be revealed what happens to her (though it’s heavily implied she’s the girl being chased through the snow) and as the audience waits to see how that thread of the mystery plays out, it’s complicated by the fact that Shauna and Jeff (Warren Kole) are now (quite unhappily) married, with a teen daughter of their own. 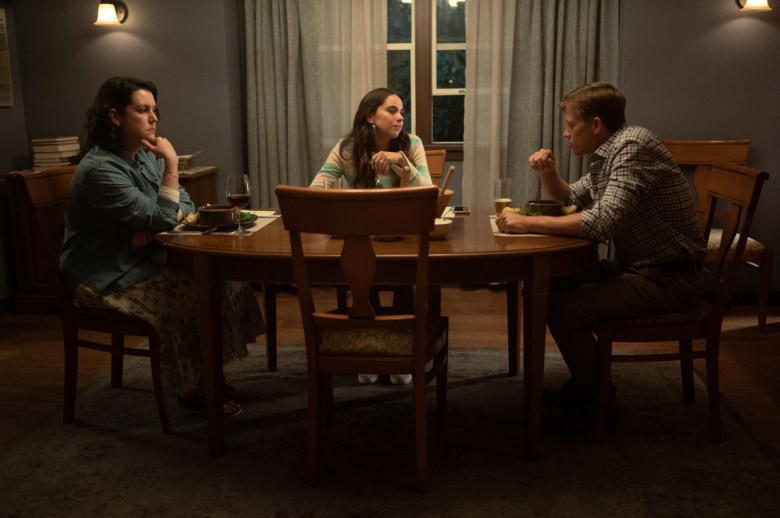 And through the couple, we see infidelity again come to call. Through the second and third episodes, Shauna grows suspicious that Jeff is cheating and eventually comes across enough information to seemingly confirm her hunch. So, with little thought, she sleeps with a sexy stranger she crossed paths with a few days earlier, showing more attention and care for him that we’ve seen her exhibit for Jeff, no matter the decade.

The cheating that took place in the past felt gutting to watch. Seeing another version of it unfold in the present felt like a relief, a reprieve from a suffocating relationship. As so rarely happens on TV, the gravity of the actions of the teens carries far more weight than that of the adults, allowing the series to throw open the windows and let in the breeze of upended expectations. It’s a high-wire balancing act which improves with each episode, a testament to the team working with Lyle and Nickerson (and co-showrunner Jonathan Lisco) and is more than worthy of consideration by both the WGA and DGA.

This is an absolute necessity for “Yellowjackets” and quite a narrative feat. As you might have noticed, while the teen characters are largely populated with relative unknowns, the adults include a glut of indie film darlings in Lewis, Lynskey, and Ricci. Seeing familiar faces allows the audience to connect with the present storyline, which might otherwise grow strained, for all the obfuscation, and allows the crash timeline to carry the burden of narrative momentum, despite the challenges that sometimes plague series focused on young women. 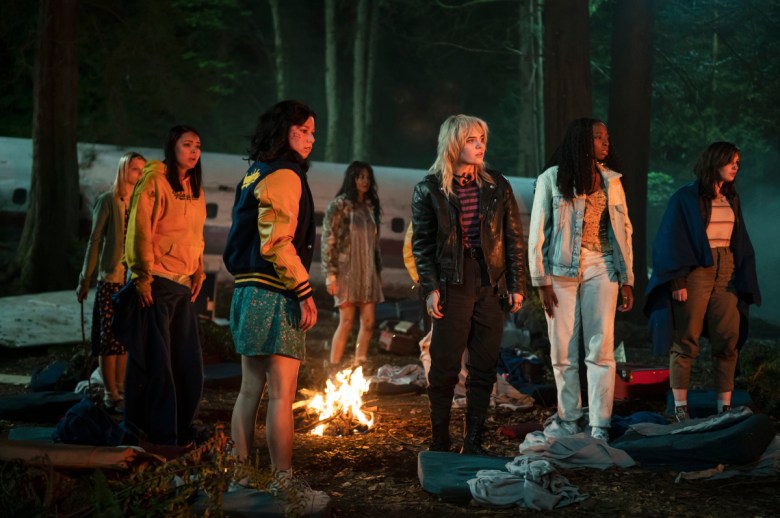 “Yellowjackets” understands women and the relationships they have with each other and themselves better than most any other series currently airing. It sees the patterns that we repeat in youth and in age and understands there’s not really any before and after. We are all a continuum of who we were, who we are, and who we might be, and those coordinates change from moment to moment.

There are TV shows that you don’t realize you need until they arrive. Too often, they’re overlooked until it’s too late. Maybe you need “Yellowjackets” in your life right now. Maybe it’s time you check out a series that doesn’t want to just push you to the edge of your seat, but off it and down to the floor. Maybe you should see the most impeccable casting accomplishments on TV. Maybe instead of watching a new addition to an old series that ended more than eight years ago (looking at you, “Dexter: New Blood”), you should check out a new story, with just as much blood, but is far more metal than a serial killer could ever hope to be.

06/12/2021 TV & Movies Comments Off on Yellowjackets Is Brutal, Brooding, and Completely Validates the Experiences of Young Women
Lifestyle