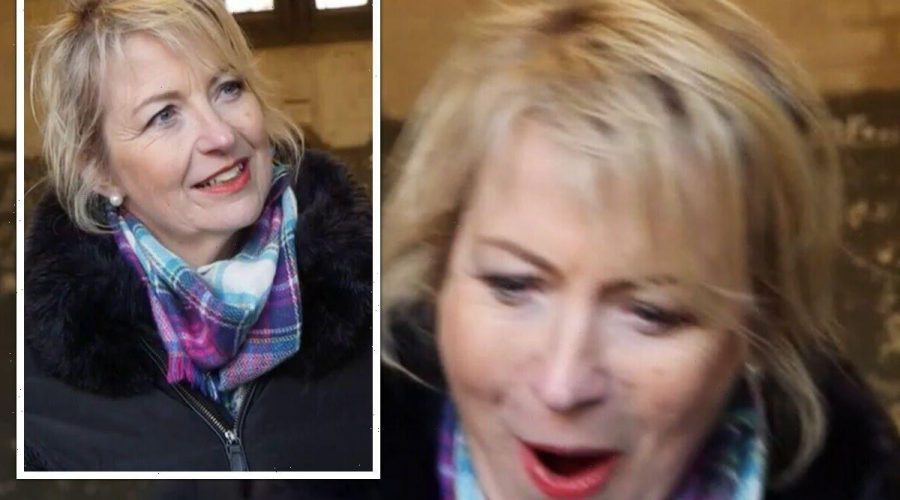 Carol Kirkwood is bitten on the leg by a Shetland pony

BBC Breakfast’s weather correspondent Carol Kirkwood was given the opportunity to meet two of the Queen’s Shetland ponies in Scotland and the footage was part of a programme called The Day I Met the Queen. Carol was thrilled to meet the small steeds but was left mortified when one nipped her as she was conducting an interview with a major for the BBC One show which aired on Saturday.

The Queen has always been fond of horses and her passion was ignited when her grandfather King George V bought her a Shetland pony called Peggy when she was just four years old.

The monarch’s equestrian penchant is shared by a member of the Royal Regiment who guards her when she visits Balmoral, in Scotland, and he goes by the name of the Pony Major.

Carol met the Pony Major in a stable while he was feeding two of the Queen’s beloved black shetland ponies.

Carol, who appeared thrilled to meet the adorable ponies said: “Oh, they are gorgeous wee ponies. What are their names?”

The major said: “Every time she is in Scotland she likes to see them and she likes to spend a wee bit of time with them, especially Lance Corporal Cruachan III who is a wee special friend.”

When Carol asked why that particular pony was so special, the major informed her when the Queen visited in 1996, the pony “had a wee nip at her”.

He continued: “It wasn’t prominently at her – she had a posy of flowers that she had received from families and he thought it was breakfast.

“So he took Her Majesty’s glove off so he got into a wee bit of trouble for that.”

When Carol asked whether the Queen thought the moment was funny, the major confirmed she “found it hilarious”.

He added: “She knows Shetlands, she learned to ride on a Shetland so she knows they have got a mind of their own.”

Carol was not laughing at the story for long though as the mischievous pony decided to bite her leg soon after she gave him a carrot.

She cried out after the pony bit her, and the major wondered if she was badly hurt.

A horrified Carol said: “Ow, You little rascal. He just bit me! You little scallywag.”

The major warned the BBC presenter that her leg would “sting for a bit” following the nasty nip.

Ever the professional, Carol brought her mind back to what she was asking the major about before the bite and carried on with the interview.

The major said the Queen makes him feel at ease as “she loves meeting people” as she is moving around the estate.

As he was explaining the moments he has spoken to the Queen, Carol remained calm and continued to stroke the pony without fear of him biting her again.

The Day I Met the Queen is available to watch on BBC iPlayer.