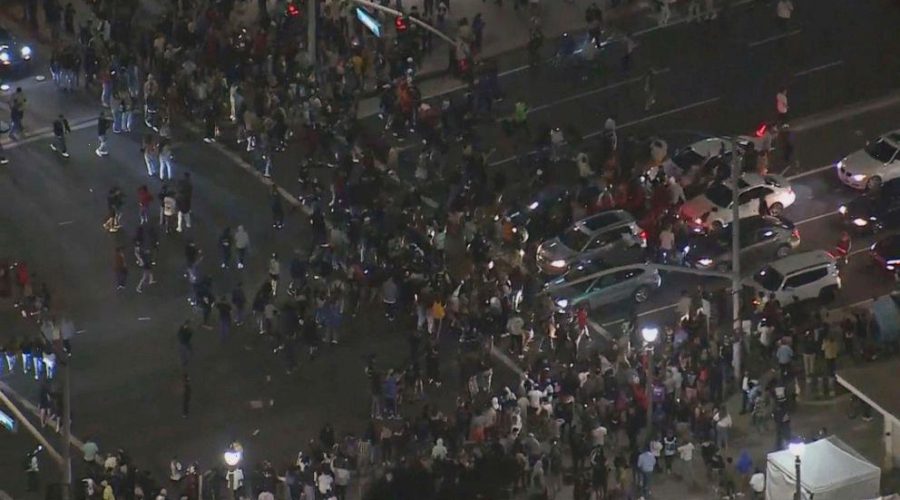 At least 149 people were arrested in Southern California’s Huntington Beach over the weekend after a birthday party invitation went viral on social media and drew “unruly crowds,” according to police.

The Huntington Beach Police Department said it began making preparations for the “highly publicized event” earlier in the week after it became aware of a video posted on TikTok inviting people to the city’s beach on Saturday evening for a large party, dubbed “Adrian’s Kickback.” A namesake hashtag has since been viewed more than 265 million times on the social media platform.

The initial crowd that gathered at the beach that evening exploded to more than 2,500 people who descended on the downtown area and threw “bottles, rocks, fireworks and other items at officers,” police said. Multiple businesses, numerous police vehicles and a lifeguard tower were also damaged from vandalism. However, no significant injuries were reported, according to police.

Aerial footage of the scene shows throngs of people flooding the streets and blocking traffic near the pier in downtown Huntington Beach, about 35 miles south of Los Angeles.

The Huntington Beach Police Department declared an unlawful assembly in the downtown area at 7:13 p.m. local time and called in assistance from outside agencies. Throughout the night, more than 150 officers from virtually all law enforcement agencies within Orange County were deployed to Huntington Beach. An emergency curfew was also put into effect to help authorities, clad in riot gear and armed with less-lethal weapons, disperse the crowds.

Police arrested and booked 121 adults and 28 juveniles for various charges, including vandalism, the firing of dangerous/illegal fireworks, failure to disperse and violating curfew.